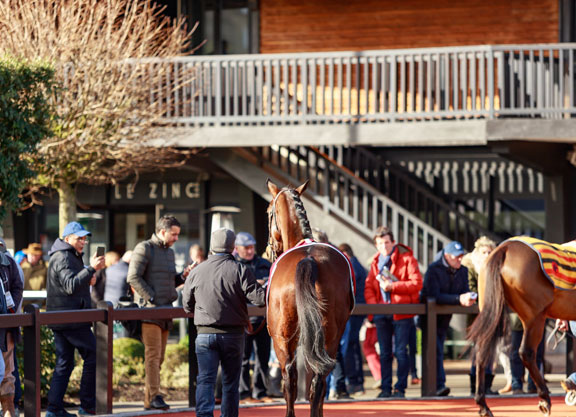 Arqana's February Sale concluded in a fairly low-key fashion on Wednesday, with two-thirds of the horses brought to the ring for the mixed auction changing hands.

Another 120 lots were sold during the second day and overall 239 of the 362 presented in the ring, or 66%, found a buyer. The average of €9,754 was down by 33.5% on the bumper trade at last year's sale, which was helped by the Manneville Dispersal, and that figure was fractionally up on the more regular level seen in 2018. The median of €4,000 also returned to that posted two years ago, while the turnover of €2,350,000, which was down by 55% on a significantly larger catalogue 12 months ago, was again closely in keeping with the normal turn of events at this midwinter event.

Trade got underway with the auction of a breeding right in the popular young National Hunt stallion No Risk At All (Fr) (My Risk {Fr}), who was bred by the late Sylvia Wildenstein. Winner of two Group 3 contests over 10 furlongs, the 13-year-old is a half-brother to Grade 1-winning steeplechaser Nickname (Fr) (Lost World {Ire}) and has stood his entire stud career to date at Haras de Montaigu. His best runners include the current Champion Hurdle favourite Epatante (Fr).

Leading British National Hunt breeders Richard and Sally Aston of Goldford Stud won the battle for the breeding right at €62,000.

A sister to another of the Montaigu stallions, Prince Gibraltar (Ire) (Rock Of Gibraltar {Ire}), led the live action when bought by Pierre Talvard's SCEA Ecurie Haras du Cadran for €82,000. Sold as lot 419, the 5-year-old Princess Bianca (Ire) won twice on the Flat when trained by Carlos and Yann Lerner. Her brother Prince Gibraltar won twice at Group 1 level while another full-sibling Princess Gibraltar (Ire) was a listed winner in Germany.

A yearling colt from the first crop of Haras de Montfort et Préaux stallion Recorder (Ire) was the highlight of the young stock section. Consigned by Guillaume and Camille Vitse through their Normandie Breeding, lot 334, a half-brother to listed winner Aubevoye (Fr) (Le Havre {Ire}), was sold to Sylvain Vidal for €52,000.

Howson & Houldsworth Bloodstock were the leading buyers at the sale, signing for six horses for a total of €222,000.