Sir Winston Returns to Winning Ways at the Big A 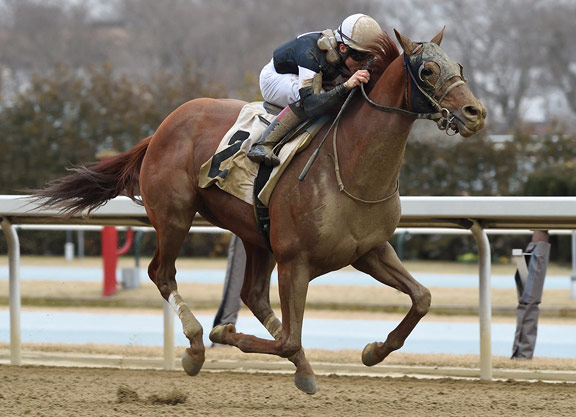 SIR WINSTON (c, 4, Awesome Again–La Gran Bailadora {GSW & GISP, $338,416}, by Afleet Alex), victor of the GI Belmont S. last June, returned to winning ways Friday in his return to dirt after a failed attempt on turf last month. Scratched due to sloppy conditions in last Saturday's Jazil S. at the Big A, the homebred was given a 4-1 chance in this competitive event. The chestnut trailed the field early as Leitone (Chi) (Dunkirk) loped along through opening splits of :24.52 and :48.33. Cutting up the fence to improve position turning for home, the Mark Casse pupil muscled his way between foes while cross-firing at the top of the stretch. Straightened out by Dylan Davis as he changed fully to the correct lead, Sir Winston kicked it into high gear in the three-path, powering clear of his foes to win by 2 1/4 lengths. Favored Musical America (Malibu Moon) filled the place spot and Leitone completed the trifecta. Sales history: $50,000 RNA Ylg '17 KEESEP.

“I think he exceeded the expectations today,” said Casse's assistant Jamie Begg. “When Mark decided to put him in this spot, we just wanted a good effort out of him and for him to show his running style. If we could hit the board and he did it his way, we'd be happy. But this was above expectations, so we are happy.”

As for what's next, Begg said, “I think Mark was looking towards the Bernardini [Feb. 29 at Aqueduct], but we'll talk to Mr. Farmer and see how he comes out of this race and go from there.”

Off the board in the GII Toyota Blue Grass S. at Keeneland last April, Sir Winston was second next out in Belmont's GII Peter Pan S. May 11. He closed strongly under a well-timed, rail-skimming ride from Joel Rosario to upset the Belmont June 8 and was shelved for six months. The chestnut returned at the Fair Grounds on yielding turf in the Dec. 28 Woodchopper S., where he failed to fire after being bumped at the start and finished last of 12.

A second generation Farmer homebred, Sir Winston is out of GSW La Gran Bailadora, whose most recent produce is the unraced 3-year-old filly La Isadora (Ghostzapper). She was most recently bred to Kantharos. Lifetime Record: GISW, 12-4-1-1, $1,005,773. Click for the Equibase.com chart or VIDEO, sponsored by Fasig-Tipton.