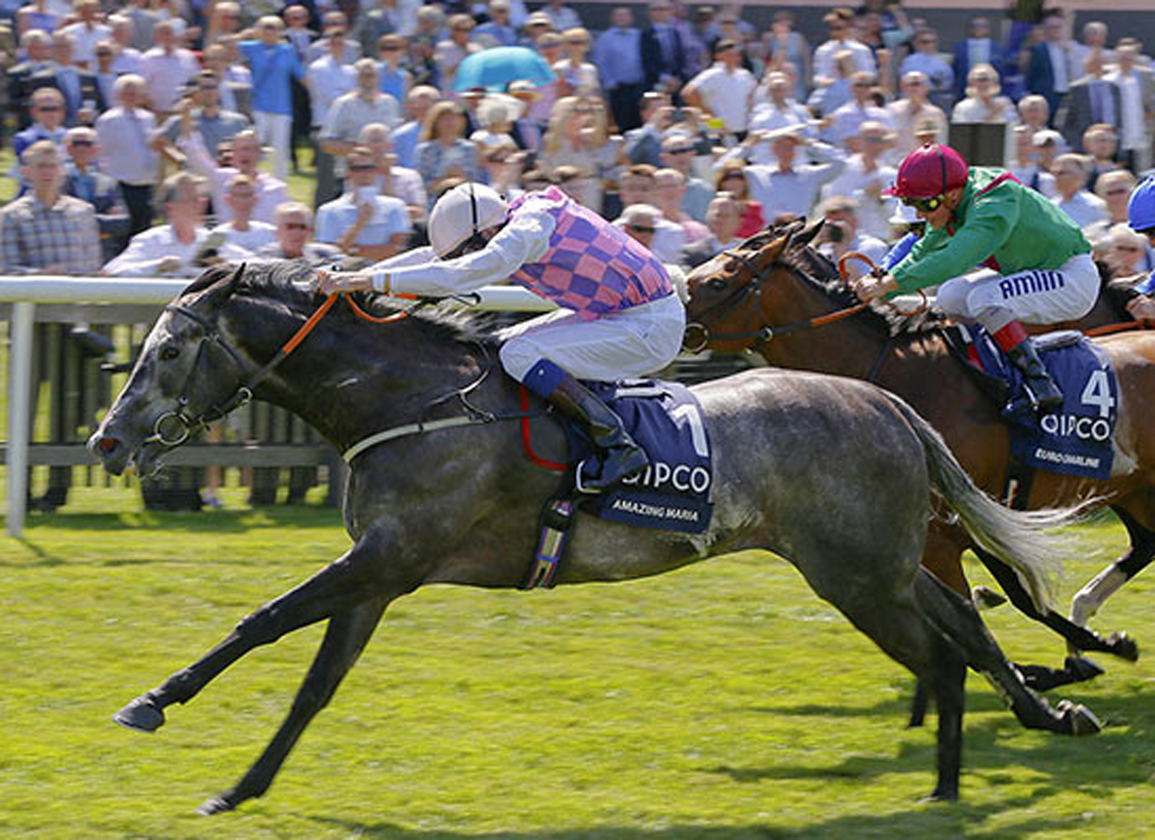 Led by Group 1 winner Amazing Maria (Ire) (Mastercraftsman {Ire}), 24 mares and fillies owned by Sir Robert Ogden will be offered at the upcoming Tattersalls December Mares Sale, which runs from Nov. 29-Dec. 2. In foal to Oasis Dream (GB), the heroine of the G1 Falmouth S. and G1 Prix Rothschild in 2015, will be offered by Barton Stud, as will her 23 compatriots, on Nov. 29-30. Matt Coleman of Stroud Coleman Bloodstock will be overseeing the consignment.

The draft entails 17 broodmares-14 in foal–and seven fillies in training, with the listed winner and Group 2-placed Agincourt (Ire) (Declaration of War) one of the stars. She is joined by the triple winner Turandot (Ire) (Frankel {GB}), who is a half-sister to Amazing Maria, as well as another winning half-sister-Golden Hind (GB) (Golden Horn {GB}). Out of a half-sister to Amazing Maria is dual winner Imperial Butterfly (Ire) (Oasis Dream {GB}); while the septet of fillies-in-training is completed by the juvenile winner Renaissance (Ire) (Caravaggio); the placed sophomore filly Canterbury Tales (GB) (Dark Angel {Ire}) who is a three-parts sister to G2 Coventry S. hero Berkshire Shadow (GB) (Dark Angel {Ire}); and the unraced juvenile April in Paris (Ire) (Zoffany {Ire}).

Another Mastercraftsman mare to be offered is the listed winner Blue Gardenia (Ire) in foal to Showcasing (GB), while the stakes-placed Isabella (Ire) (Galileo {Ire}) and the group-placed Pandora (Ire) (Galileo {Ire}) are both in foal to the late son of Danehill Dancer (Ire). Amazing Maria's dam Messias da Silva (Tale of the Cat) is also set to go under the hammer and her yearling and weanling are both sons of the late Galileo (Ire). Other mares ready to sell for Sir Robert Ogden are: Amazing Grace (Dubawi {Ire}) out of Amazing Maria and in foal to Teofilo (Ire); Carpe Vita (Ire) (Montjeu {Ire}), a full-sister to Classic winner Leading Light (Ire) in foal to Showcasing (GB); stakes winner and Group 1 placed Amazonas (Ire) (Cape Cross {Ire}) in foal to US Navy Flag; and the winning Natural Bloom (Ire) (Galileo {Ire}).

Tattersalls Chairman Edmond Mahony said, “Sir Robert has been a huge contributor to British racing enjoying enormous success over many years and it is a privilege to have his team of 24 beautifully bred fillies and mares selling at the forthcoming Tattersalls December Sale. Sir Robert's fillies and mares will undoubtedly be amongst the highlights of Europe's premier breeding stock sale and the outstanding multiple Group 1 winner Amazing Maria, who was a favourite of so many when competing and winning at the highest level, will be a headline act.”