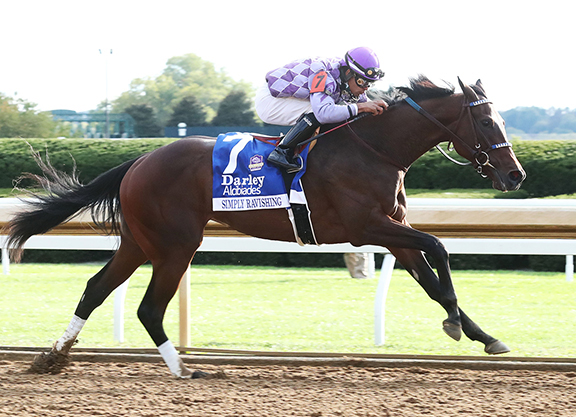 Simply Ravishing (Laoban), the 6 1/4-length victress of the GI Alcibiades S. at Keeneland last year, has been retired to be bred, with an eye toward a possible sale at public auction this autumn. Trainer Ken McPeek confirmed the news via phone to TDN late Wednesday afternoon, shortly after TVG's Gabby Gaudet broke the story.

“She had a minor breathing issue that we were dealing with, and we decided that if she couldn't be as competitive in Grade I races as she was at age two, we were going to breed her,” McPeek told TDN.

“We're looking at several of the top stallions–Tapit, Into Mischief, Curlin,” McPeek continued. “And there's a more-than-likely chance that Harold Lerner and his partners [Magdalena Racing and Nehoc Stables] are going to contemplate selling her in the fall.”

Simply Ravishing, a $50,000 FTKOCT purchase, started her career with three straight wins, including a MSW and the off-turf P.G. Johnson S. at Saratoga prior to her Grade I win at Keeneland. She was fourth, beaten two lengths, in the

GI Breeders' Cup Juvenile Fillies, then  fourth again in the GII Golden Rod S. to round out her 2020 campaign.

Her sophomore debut was last Saturday at Keeneland, where she started as the 3-2 co-favorite. Simply Ravishing set the pace for six furlongs, then backed off to finish sixth and last. McPeek had confirmed post-race via Twitter that she had cooled out sound.

Simply Ravishing was both the first stakes winner and then the first Grade I winner last year for then-freshman sire Laoban. Simply Ravishing was the first foal to race out of the More Than Ready mare Four Wishes, who was purchased by Meg Levy of Bluewater Sales for just $500 in 2017 after she had been abandoned at a boarding farm.

“She is as beautiful as filly as you'll ever lay eyes on,” McPeek said. “She obviously was exceptionally good at age two, and she's going to make a wonderful broodmare. She should have beautiful foals. It's unfortunate that she's not going to go on from age two to three, but it's not the first time this has ever happened. We're disappointed we can't race her, but we felt like that if she couldn't compete in Grade I company, then we're better off breeding her.”

The announcement comes one day prior to Simply Ravishing's third birthday.