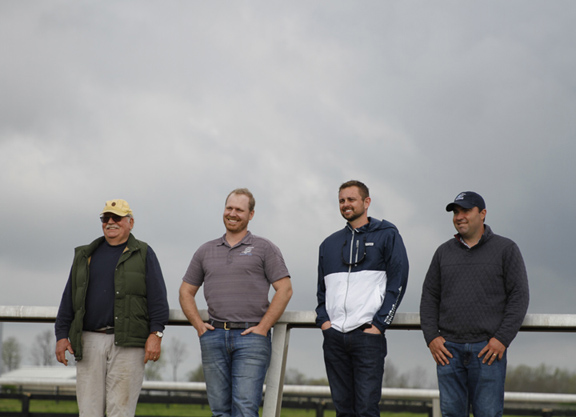 Matt Bowling was restless, looking for a new business venture.

The Louisville native was the co-owner of a leading sales company, Vinery Sales, and the founder of his own bloodstock agency in Bowling Bloodstock. But the successful entrepreneur was looking for something more.

Johnson went on to run his own Silver Springs Farm with his son, Erik Johnson. The Paris, Kentucky-based farm offered breaking and training as well as breeding services. Over the years, Silver Springs Training had built a name for itself, and Bowling had noticed the reputation it was starting to develop. “I had sent clients to a lot of different people,” said Bowling. “But the biggest glowing reviews always came from Silver Springs.”

So when the Johnsons and Kevin Noltemeyer approached Bowling about a partnership opportunity to expand Silver Springs Training, Bowling jumped at the chance. “I've got so much respect for Steve not only as a horseman but also as a person,” said Bowling. “I've sent not only my own horses, but also client horses to both Erik and Kevin, and have always been extremely impressed. Everyone wanted the Silver Spring guys to expand, and I had been wanting to do something similar, so it was a very natural fit for us.”

The group leased out B. Wayne Hughes's Spendthrift Farm Training Center. The property was no stranger to producing winning horses. It was originally the location of the historically successful Bwamazon Farm.

The first thing the new partnership did was give their property an overhaul. The track underwent a major renovation, fences were rebuilt, a grass gallop was added, and fields were reseeded.

The historical six-furlong track was a huge focus of the renovation. “The track was put in with the same base as Churchill Downs,” Bowling said. “There's been a ton of success off of it, but one thing we all agreed upon was that quality and safety of the track was absolutely paramount.”

They sought the advice of several top track safety experts to help them reach this goal. “We brought in guys like Dr. Mick Peterson, who is the absolute gold standard when it comes to track maintenance and engineering. We also sought the help of Butch Lehr, who has overseen the track at Churchill for over 30 years. These gentlemen have been instrumental in not only helping get the track absolutely perfect to start, but also to monitor it and advise us on how to keep it that way,” Bowling said.

In the fall of 2019, Silver Springs Training Center opened for business in their new location. The team planned to send out a press release, but their phones rang with such insistence that their stalls were soon filled. Their first clients included Spendthrift Farm, Sol Kumin, Michael Dubb, Ten Strike Racing, Dr. Kendall Hansen, and MyRacehorse. This clientele sent them an impressive first string of young horses including a full sister to Grade I winner Mia Mischief (Into Mischief) and a Frosted half-brother to Grade I winner Dance with Fate (Two Step Salsa).

But the top pedigree prodigy came from down the street at Spendthrift. Q B One, a colt by Uncle Mo and the first foal from four-time Eclipse Champion Beholder (Henny Hughes), was broke and trained at Silver Springs Training Center before being shipped to California to train under Richard Mandella.

Spendthrift was a huge supporter last fall, sending all of their yearlings to be broke at Silver Springs. “It's been really nice for those guys to be able to come over and watch their horses work,” Bowling said. “Just to know people have that much confidence in our program to send us these top quality type horses has meant a lot.”

Ned Toffey, the General Manager at Spendthrift Farm said, “Because the horses and staff are all right here in Lexington, we have been able to appreciate and observe all the stages of our babies' development. The team at Silver Springs is extremely patient and does an outstanding job.”

Bowling said he sees even more potential for growth as more Kentucky-based owners and breeders look to keep their horses right outside their doors. “Everybody used to go straight to Florida, but there's been such an influx in demand for people who want to stay here to get their horses broke or keep their horses here that they want to put on lay up.”

Bowling credits head trainer Kevin Noltemeyer for much of the business's success. “Our biggest asset has been word of mouth,” said Bowling. “Kevin has such a great reputation in the industry for doing well with the babies. We get such great endorsements from trainers. When they receive horses from us, they say they arrive as good as anywhere else, if not better. And that's a complete testament to Kevin.”

While Noltemeyer is busy with the training side of the business, Erik Johnson manages the mare, foal, and yearling divisions on their 250-acre location in Paris.

When asked about the Silver Springs philosophy, Bowling responded, “Communication, horsemanship, and facilities. Communication is huge with us. We're super open as far as inviting clients out to the barn. It's a pretty social place with trainers, agents, and owners constantly out seeing their horse work.”

Silver Springs has a full-time staff member dedicated to communicating with clients- sending frequent pictures, workout videos, and even videos taken with a GoPro from the rider's perspective.

With MyRacehorse sending their horses to Silver Springs last fall, the team got to share what they did with new members of the racing community. “A lot of the MyRacehorse owners visited us during training, and many of them were first time owners,” said Bowling. “For some it was their first time on a farm. So we got to show them the whole process, which was pretty cool.”

With their first 2-year-olds heading off to trainers, the training center now has openings for new clients. And with the unprecedented situation surrounding the racing industry this month, Bowling said their team saw this as the perfect opportunity to announce their partnership to the industry for the many owners and trainers looking for a place to send their horse.

“There's folks who don't want to send their horse to a race track that doesn't have a meet, but they also don't want to turn them out to where they lose all their fitness,” Bowling said. “I think we provide a unique opportunity in that we've got a lot of turnout for training horses, which is fundamental for them mentally, but we also are able to keep them fit until the trainers decide when and where they can race next.”