Silver Prospector Gets the Trip, Rallies to Take Southwest 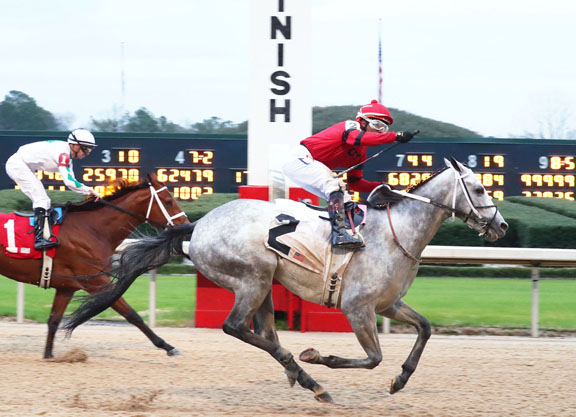 A somewhat puzzling and well-beaten fourth as the second betting favorite in the Jan. 24 Smarty Jones S., Ed and Susie Orr's Silver Prospector (Declaration of War) made amends in no uncertain terms in Monday's $500,000 Southwest S. at Oaklawn Park, parlaying a perfect trip into a one-length defeat of pacesetting Wells Bayou (Lookin At Lucky) at better than 9-2. Answer In (Dialed In), favored off his runner-up effort to Shoplifted (Into Mischief) in the Springboard Mile at Remington Dec. 15, checked in a distant third after racing erratically in the final furlong.

Content to draft in behind as Wells Bayou set a strong pace from the two path in advance of longshot Villanous (Wicked Strong) and a three-wide Answer In, Silver Prospector traveled nicely under a long Ricardo Santana, Jr. hold through a half in :46.60. Right on the back of the leader rounding the turn, the gray colt went for a split between Wells Bayou and Answer In approaching the three-sixteenths marker, took command for good with about 150 yards to race and inched away despite some greenness in the latter stages. The final time of 1:43.01 was just 0.01 slower than that recorded by Warrior's Charge (Munnings) in the GIII Razorback H. one race prior.

“I think we were pretty reserved today,” said winning co-owner Ed Orr. “We had a lot of information that he was doing good. We were disappointed in the fourth-place finish in the Smarty Jones and thought that we could have done better there. We've learned a long time ago in this business to not get your hopes too high because they can be shot down pretty fast.”

A big-figure maiden winner at fourth asking sprinting over the Keeneland main track Oct. 13, Silver Prospector attended a testing pace in the Oct. 27 Street Sense S. over Churchill's one-turn mile and did well to cling on for third. Off the pace in that track's GII Kentucky Jockey Club S. in the slop Nov. 30, he defeated GI Champagne S. hero Tiz the Law (Constitution) into third and caught similar underfoot conditions in the Smarty Jones, where he raced evenly and well off a much slower tempo and was beaten 7 1/2 lengths by his stablemate Gold Street (Street Boss).

Silver Prospector is one of 25 black-type winners and 14 graded winners for the expatriated Declaration of War, whose American-conceived, but Japanese-foaled son Dieu du Vin (Jpn) will be the one to beat in this coming Sunday's Listed Hyacinth S. at Tokyo, offering the winner 30 points on the Japan Road to the Kentucky Derby. The treble restricted stakes-placed Tap Softly was barren to Nyquist in 2018, produced a Carpe Diem filly in 2019 and was most recently bred to Maclean's Music.