Siblings to Derby Contenders on Offer at OBS March 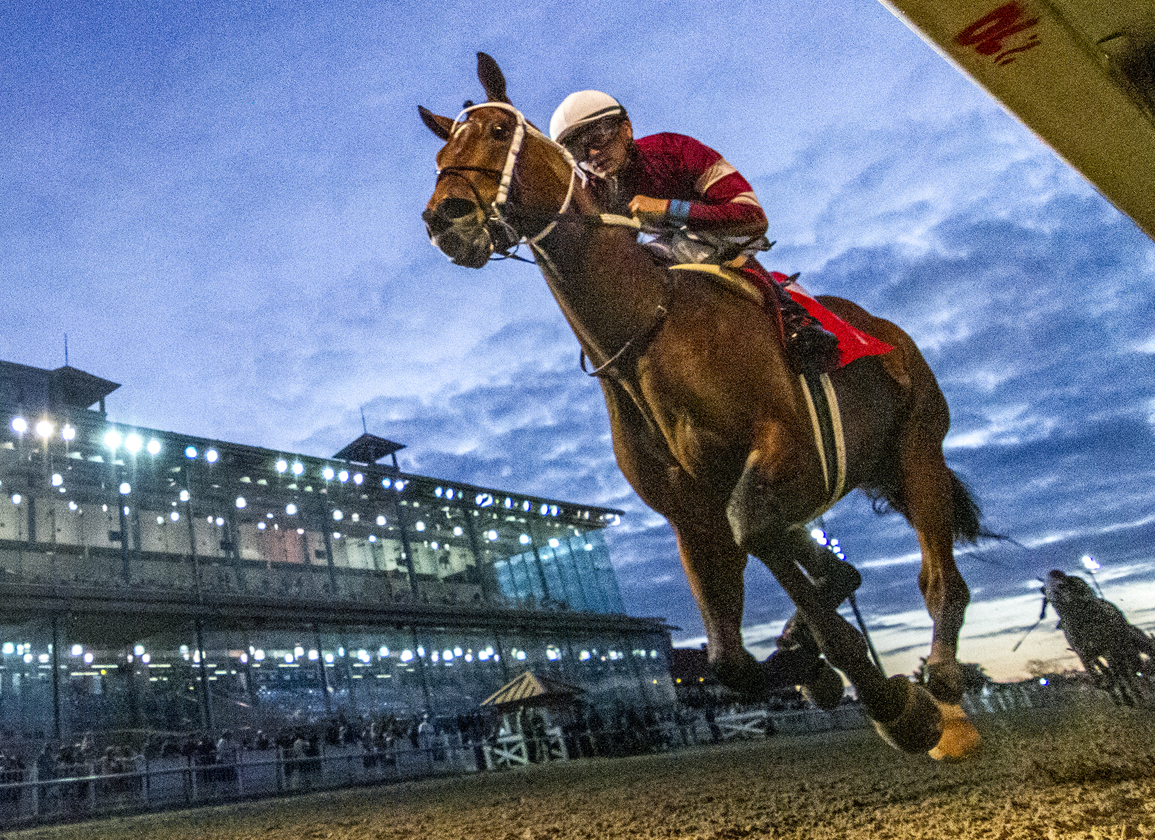 On the opening day of the OBS March 2-Year-Olds in Training Sale, just 7 1/2 weeks ahead of the First Saturday in May, buyers will have a chance to purchase the half-siblings to a pair of GI Kentucky Derby contenders.

The first of the two to go through the ring Mar. 15 will be an Always Dreaming half-brother to GII Risen Star S. winner Epicenter (Not This Time). Consigned by Ciaran Dunne's Wavertree Stables as Hip 121, the bay is out of stakes winner and GSP Silent Candy (Candy Ride {Arg}).

The colt was purchased for just $25,000 at Keeneland September by former trainer Mike Pender, who has now shifted into a career as a bloodstock agent. After 25 years on the backside, Pender picked up his first group of three yearlings for a pinhooking partnership in 2020. One of those was GIII Pocahontas S. winner Hidden Connection (Connect), a $40,000 KEESEP buy turned $85,000 OBSOPN juvenile; and another was Reserve Currency (American Freedom), who brought the same price at KEESEP and summoned $375,000 at EASMAY.

“He was very athletic and had a two-turn pedigree,” Pender said of the colt, who is from the first crop of GI Florida Derby and Kentucky Derby winner Always Dreaming. “I pulled him out multiple times and couldn't take my eyes off of him. He has enough speed to make him real dangerous from what I see watching him train at Wavertree. Physically, he is all you could want. I loved him in September and now he has developed that all-important swagger as well. He is a real stunner.”

About two months after the Keeneland September Sale, Epicenter earned his diploma with a decisive second-out score at Churchill Downs Nov. 13. He followed that with a 6 1/2-length drubbing of his rivals in the Gun Runner S. at Fair Grounds Dec. 26. Kicking off his sophomore season with a second in the GIII Lecomte S. in NOLA Jan. 22, the $260,000 KEESEP buy went wire-to-wire to take the Risen Star by 2 3/4 lengths. Epicenter tops the Kentucky Derby leaderboard with 64 points and is being pointed at the Mar. 26 GII Louisiana Derby.

“It was great timing,” Pender said. “I told my clients I was buying them a racehorse. This way if the horse stubs his toe or something heading into the sale, we have that back up plan. Looks like we have a big shooter in this Always Dreaming colt. The fact he is a half to Epicenter is meaningful, but if you just watch him go, he screams two-turns. Like Epicenter, he is the real deal.”

Just four hips after Epicenter's half-brother goes through the ring at OBS March, a Mendelssohn half-sister (Hip 125) to recent GII Fasig-Tipton Fountain of Youth S. winner Simplification (Not This Time) is scheduled to sell. They are out of SP Simply Confection (Candy Ride {Arg}), who is a daughter of MSP Ballado's Halo (Saint Ballado). That mare is also responsible for the dam of MSW & MGSP Inflexibility (Scat Daddy), MSW & GSP Halo Again (Speightstown) and GSP Fundamental (Arch).

Bred in Florida by France and Irwin Weiner, Hip 125 was purchased by consignor Niall Brennan and a partner for $95,000 at the OBS January Sale under the name Democracy Bloodstock. She RNA'd for $190,000 at the Fasig-Tipton Saratoga Sale and was withdrawn from Fasig's October Sale and pointed to this spot.

“I liked her straight off the bat as a short yearling,” Brennan said. “She was immature, but had a lovely frame to her, nice outlook and intelligent head. She looked like she would grow into something. Mendelssohn's first-crop had been selling very well as weanlings. He was a stallion with a lot of potential.”

The horseman continued, “She had a nice, young pedigree. I had a few of the foals under the second dam, including Inflexibility, and they were all black-type. [Hip 125] was the second foal out of this mare, the first being Simplification. She's a young, stakes-place Candy Ride mare. I thought she was great value. I was partial to the family and thought she was a pretty filly that might grow into something.”

A $50,000 RNA at KEENOV, Simplification graduated at second asking sprinting at Gulfstream in October. Third in an optional claimer going the same distance a month later, he captured the Mucho Macho Man S. on New Year's Day, just 24 days before his younger sister went through the ring at OBS January. Runner-up in the GIII Holy Bull S. Feb. 5, Simplification provided his half-sibling with an even bigger update ahead of this auction, rallying to a decisive victory in last Saturday's Fountain of Youth. He is currently number three on the Derby leaderboard with 54 points, the same number held by GII Rebel S. winner Un Ojo (Laoban), who earned the number two spot with higher earnings.

“It is great timing. He is a very nice horse,” Brennan said. “He had already won the Mucho Macho Man and the update was in the catalogue. He proved he was for real when he came back and ran so well. He is a very nice 3-year-old and he made an already nice pedigree even better.”

In addition to her strong female family, Hip 125 is from the first crop of $3-million KEESEP topper Mendelssohn, winner of the GI Breeders' Cup Juvenile Turf and the G2 UAE Derby on dirt. He was also second in the GI Runhappy Travers S. The son of Scat Daddy is a half to future Hall of Famer Beholder and GISW and top sire Into Mischief.

“She's done very well,” Brennan said when asked how the filly has developed in her training. “She's an average-sized filly, looks a bit like her brother. She is very smooth, very intelligent. These Mendelssohns, the ones I have anyway, are very professional, very focused. They all show the same kind of consistency and class. They are all very good movers. She acts that way, very easy, a really classy filly. She has great action on the racetrack. She moves great on the dirt. All the Mendelssohns I have, I think they will go on either surface from the way they are training.”