Siblings of Successful Saratoga Grads on Offer at Fasig 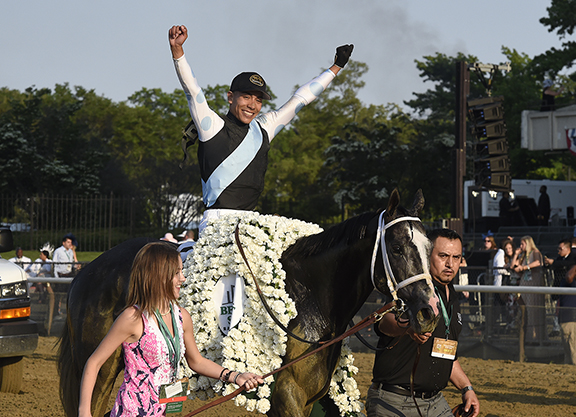 There have been several horses over the past 100 years of the Fasig-Tipton Saratoga Sale to summon big price tags, eclipsing the $500,000 mark, in the Humphrey S. Finney pavilion and then go on to be quite successful on the racetrack. The siblings of four such Thoroughbreds are part of the catalogue for the famed auction's centennial edition to be held at the Spa Aug. 9-10.

The 2017 GI Belmont S. winner Tapwrit (Tapit) summoned $1.2-million at the Saratoga Sale back in 2015 from a partnership comprised of Bridlewood Farm, Eclipse Thoroughbreds and Robert LaPenta. Prior to the Belmont, the gray captured the GII Lambholm South Tampa Bay Derby and retired with a record of 13-4-1-1 and earnings of $1,362,402. He retired to stud at Gainesway and is represented by his first yearlings this season.

Tapwrit's Grade I-winning dam Appealing Zophie (Successful Appeal) is also the dam of MGSW & GISP Ride a Comet (Candy Ride {Arg}) and SW Inject (Frosted). Barronstown Stud purchased the mare for $1.2 million carrying a foal by Tapit at the 2018 Fasig-Tipton November Sale. Appealing Zophie's most recent foal is a colt by Justify, who is offered as Hip 41 with Eaton Sales.

“He is beautiful. What I have found pretty unique about him is he has a great, long, well-angled shoulder and incredible depth up front, much like his brother,” said Eaton's Reiley McDonald. “The mare is by a really underrated broodmare sire in Successful Appeal. She has been outstanding with a very limited pedigree, but she could run herself. She has two graded stakes winners, including a Belmont Classic winner. When I looked at this one on the farm back in April, I wrote down two things: an A and Saratoga.”

MGSW Travel Column (Frosted) sold at the most recent edition of the Saratoga Sale in 2019, bringing $850,000 from OXO Equine's Larry Best. She justified her price tag pretty quickly, earning the 'TDN Rising Star' moniker for her impressive debut win at Churchill in September and was third in the GI Darley Alcibiades S. next out. Closing 2020 with a win in the GII Golden Rod S., the gray was second in the GII Rachel Alexandra S. in February and won the GII Twinspires.com Fair Grounds Oaks in March. She was fifth in both the GI Longines Kentucky Oaks Apr. 30 and the GI Acorn S. June 5.

Travel Column summoned almost three-times that the following year in Saratoga and her year-younger brother would have eclipsed that number if the 2020 renewal of the sale had not been canceled due to COVID-19. The son of American Pharoah, now named Corton Charlemagne, was re-routed to Fasig-Tipton Selected Yearlings Showcase–a combination of the Saratoga, New York-Bred and July Sales held in Lexington in September–where he sold for $1.25 million to Speedway Stables. Swingit's 2020 colt from the first crop of City of Light will be the second-to-last horse through the ring in Saratoga this year as Hip 209.

“This colt is a very typical Swingit in that we think he is a pretty special horse,” said Conrad Bandoroff of Denali Stud, which consigns the colt. “Bayne and Chris Welker, who are two very high-caliber horsemen, think he is the best foal Swingit has given them. That is pretty high praise and I would have a hard time arguing with them. He is just a very forward, very attractive, well-balanced, strong individual. Corton Charlemagne, the horse we sold for $1.25 million at the Fasig-Tipton Yearling Showcase [in September], was a May foal. This colt is a little more progressive and forward-looking than he was.”

He continued, “Obviously, Travel Column was a great success. By a freshman sire in Frosted, she sold for $850,000 at Saratoga two years ago. There is a little bit more to this colt in terms of substance and strength, but he has that fluid walk and athleticism Travel Column had. What was great about her whole story was there were people shopping the sale, who, before the sale, said they were looking for colts by proven stallions, but every time they came by the consignment, they kept seeing this gray filly and fell in love. That is what happened with Larry [Best]. We are thrilled that it worked out and we are hoping this colt is going to come up here and continue Swingit's Saratoga success. We sold Travel Column up here. We sold a Bodemeister very well up here, and, had there been a Saratoga Sale up here last year, the American Pharoah would have come up here and been the sale-topping colt.”

Four Wheel Drive, a colt from the initial crop of Triple Crown hero American Pharoah, proved quite popular at the 2018 edition of the Saratoga Sale, bringing $525,000 from pinhookers Randy Hartley and Dean DeRenzo, who were acting on behalf of Breeze Easy. He RNA'd for $825,000 the following March at the Fasig-Tipton Gulfstream Sale, but made up for it on the racetrack. Opening his account with a win in the Rosie's S. at Colonial Downs, the bay followed suit with a victory in Belmont's GIII Futurity S. and won the GII Breeders' Cup Juvenile Turf Sprint S. to take his juvenile record to three-for-three.

His stakes-winning dam Funfair (More Than Ready), a 'TDN Rising Star', did not produce foals in 2018 or 2019, but her 2020 foal, a full-sister to Four Wheel Drive, is Hip 102. She sells under the same Paramount Sales banner that her brother did.

“We are very pleased to have the full-sibling to BC Juvenile Turf Sprint and Futurity S. winner Four Wheel Drive,” said Paramount's Lesley Campion. “She is from an incredibly fast family with two siblings having set new course records [Four Wheel Drive and Born Great (Scat Daddy)], the family is hugely precocious and this filly looks to have that same physical forwardness to her. Four Wheel Drive got that clever name when Dean DeRenzo commented, here at the Saratoga sale, on his walk being like a four wheel drive, powerful action from each limb, and his sister shows the same. She has quality, strength and balance, coupled with a cool head, a filly anyone would love to add to their stable.”

While 'TDN Rising Star' Flightline (Tapit) has not won a stake yet, most people would agree it's only a matter of time. Purchased by West Point Thoroughbreds for $1 million at the 2019 Saratoga Sale, the bay has made just one start so far, but he made it count, romping by 13 1/4 lengths and stopping the clock for six furlongs in 1:08.75 at Santa Anita in April. Trained by John Sadler, the bay races under a partnership that, in addition to West Point, includes Hronis Racing, Siena Farm and breeder Summer Wind Equine.

Summer Wind owner Jane Lyon purchased Flightline's Grade III-winning and MGISP dam Feathered (Indian Charlie) for $2.35 million in foal to War Front at the 2016 Keeneland November Sale. Flightline is her second foal and second winner from two foals of racing age. Her fourth foal is Flightline's yearling full-brother, who is Hip 92 in the Lane's End consignment.

“This colt is very well put together,” Lyon said. “I think he is stockier and has a little more bone than Flightline had. We are hopeful that the buyers will like him for his own physicality and will appreciate that the mare if capable of producing a runner.”

The 100th edition of the Fasig-Tipton Saratoga Sale gets underway Monday at 6:30 p.m.