Siblings of Derby and Oaks Contenders on Offer at September Sales 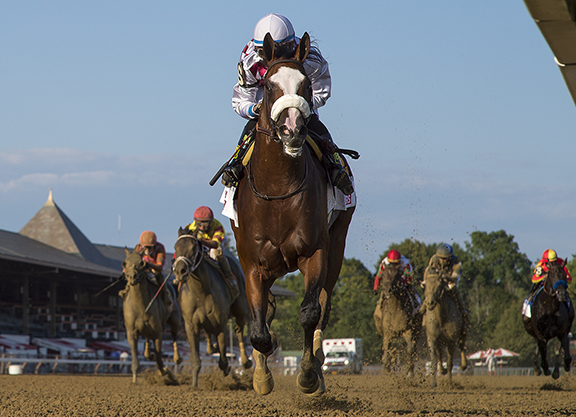 With the racing and sales calendars turned upside down by the COVID-19 pandemic, buyers at the upcoming Keeneland September Sale and Fasig-Tipton Selected Yearlings Showcase will have a unique opportunity.

Typically, the GI Kentucky Derby and GI Kentucky Oaks–as well as the rest of the Triple Crown trail for that matter–are long over by the time the major yearling auctions take place. But with those marquee sophomore races pushed back to the first weekend in September, buyers could have a chance to purchase a sibling to this year's Derby or Oaks winner–or next month's GI Preakness S. hero–just days after their victory as many of the top contenders have close relatives in either the Fasig or Keeneland catalogues.

Tiz the Law (Constitution) sits at the top of the Kentucky Derby leaderboard and will be heavily favored to take home the roses on the First Saturday in September. The flashy bay has been flawless this season with a quartet of graded successes, capped by ultra-impressive scores in the June 20 GI Belmont S. and Aug. 8 GI Runhappy Travers S.

Tiz the Law's yearling half-brother by Mission Impazible–out of GSW Tizfiz (Tiznow)–will be offered early in the Fasig-Tipton sale as part of the 164-hip New York-bred contingent. The gray is consigned by Sequel New York on behalf of breeder Twin Creeks Farm.

Honor A. P. captured the GI Runhappy Santa Anita Derby, which was run in June this year, and followed suit with a late-rallying second behind Thousand Words (Pioneerof the Nile) in the Shared Belief S. Aug. 1. He is number four on the Derby leaderboard.

Immaculately bred by George Krikorian, Honor A. P. is out of MGISW and millionaire Hollywood Story (Wild Rush), who is also the dam of SW Miss Hollywood (Malibu Moon), MGSP Hollywood Star (Malibu Moon) and MSP Hoorayforhollywood (Storm Cat). The bay was an $850,000 purchase out of the Hill 'n' Dale consignment a the 2018 renewal of this sale when held at its usual venue in Saratoga in August. John Sikura's operation will offer Honor A. P.'s yearling half-sister by Curlin near the end of this year's two-day sale.

King Guillermo (Uncle Mo), number five on the Derby leaderboard, blew up the tote when dominating the GII Lambholm South Tampa Bay Derby at odds of 49-1 back in March. The bay was last seen finishing second to the recently retired Nadal (Blame) in his division of the GI Arkansas Derby May 2.

Out of Slow Sand (Dixieland Band), King Guillermo has a yearling half-brother by American Pharoah in the Hunter Valley consignment at KEESEP. Bred by Carhue Investments, Grouseridge LTD and Marengo Investments, the colt was purchased by Ilse Smith Bloodstock for $190,000 at KEENOV.

Brookdale Sales consigns Thousand Words' half-brother by Hard Spun at Keeneland. Bred in Florida by Hardacre Farm, the chestnut is out of MGSW Pomeroy's Pistol (Pomeroy), who was purchased by Mike Ryan for $475,000 in foal to Arrogate at this year's Keeneland January sale.

Dr Post (Quality Road) sits at number eight in the Derby standings after finishing second to Tiz the Law in the Belmont and third to Authentic (Into Mischief) in the GI TVG Haskell Invitational S. July 18.

The Dale Romans-trained Attachment Rate (Hard Spun) sits at number 15 in the current Derby rankings. Third in the GIII Gotham S. back in March, the $200,000 KEESEP buy was most recently second to Art Collector (Bernardini) in the Runhappy Ellis Park Derby Aug. 9.

Machmer Hall Sales offers a yearling half-sister by Classic Empire during the postponed Fasig-Tipton Sale, typically held in August in Saratoga. Fergus Galvin purchased their dam Aristra (Afleet Alex) for $30,000 at KEENOV with this filly in utero. Unlike her VA-bred half-brother, the chestnut was born in New York and bred by Sequel Stallions NY and Lakland Farm.

Necker Island (Hard Spun) is last, but not least on the leaderboard at number 19. Third in the GIII Indiana Derby July 8, he completed the trifecta in the Runhappy Ellis Park Derby Aug. 8.

His yearling half-sister by Twirling Candy will be up for grabs at Keeneland September. Out of Jenny's Rocket (Mr. Greeley), the bay was bred by Stonestreet and is consigned by Elm Tree Farm.

Mr. Big News was a late addition to the field, announced Monday afternoon. Fifth in the GII Risen Star S. in February, he won the Oaklawn S. in April and was most recently sixth in the Blue Grass.

Don Alberto purchased Mr. Big News's dam Unappeased (Ire) (Galileo {Ire}) for $675,000 in foal to Speightstown at the 2013 KEENOV sale. They offer her yearling colt by Carpe Diem as part of the Small Batch Sales consignment at Keeneland.

Topping the list of Oaks contenders is Swiss Skydiver (Daredevil), who will likely vie with Gamine (Into Mischief) for race day favoritism. The chestnut filly has been on a tear this year, capturing the GII Fasig-Tipton Gulfstream Park Oaks, GIII Fantasy S. and GII Santa Anita Oaks. She showed guts when finishing a strong second to late Derby defection Art Collector in the GII Toyota Blue Grass S. July 11 and completed her Oaks prepations with a win in the prestigious GI Alabama S. at Saratoga Aug. 15.

Checkmate Thoroughbreds will offer this leading lady's yearling half-brother from the first crop of Danzing Candy, who was bred in California by Var Reeve and Stan Ray. Blue Chip Thoroughbreds purchased their dam Expo Gold (Johannesburg) with this colt in utero for $15,000 at the CTBA Sale in January.

Shedaresthedevil (Daredevil) has held her own on the Oaks trail this season, landing her at number four on the leaderboard. Winner of the GIII Honeybee S. in March, the bay was third to Swiss Skydiver in the Fantasy and returned to winning ways in a Churchill optional claimer June 5. She captured the GIII Indiana Oaks last time out July 8.

'TDN Rising Star' Donna Veloce (Uncle Mo) is number eight in Oaks points, but will likely be one of the preferred fillies come the First Friday in September. A $450,000 KEESEP purchase turned $800,000 FTFMAR juvenile, the bay has made just one start this year, capturing the GIII Santa Ysabel S. Mar. 8 by 4 1/4 lengths over eventual GI Ashland S. victress Speech (Mr Speaker). She breezed five furlongs in 1:00.80 Friday, a move her trainer Simon Callaghan deemed impressive enough to go to the Oaks off of.

Her dan Coin Broker's (Ire) (Montjeau) yearling filly by War Front is part of the Paramount Sales consignment during Book 1 of KEESEP. The filly is bred by Orpendale and Chelston.

Gamine (Into Mischief) may be number nine in the Oaks standings based on points, but she was granted morning-line favoritism at Monday's draw. A $220,000 KEESEP yearling purchase, the 'TDN Rising Star' topped the EASMAY sale at
$1.8-million and proved worth the price tag, crossing the finish line first in all four of her starts. The bay was nothing short of sensational when dominating both the GI Acorn S. and GI Test S. this summer.

Barbara Banke of Stonestreet Stables purchased Gamine's dam Peggy Jane (Kafwain) for $200,000 at OBS April and she was stakes-placed for her Grace Stables. Gainesway consigns Peggy Jane's yearling filly by Ghostzapper, who was bred and raised at Stonestreet.

Right behind Gamine at number 10 is Hopeful Growth (Tapiture). Off the board in the GIII Delaware Oaks July 4, she returned to winning ways with a victory in the GIII Monmouth Oaks Aug. 1.

A half-sister to ill-fated GSW Ten City (Run Away and Hide), Hopeful Growth is out of the unraced Maiden America (Rock Hard Ten), whose latest son by Run Away and Hide will be available at KEESEP. Consigned by Darby Dan Farm, the bay colt is bred by Darby Dan principal John Phillips' Phillips Racing Partnership.

Dream Marie (Graydar) is the last of the Oaks top 12. The gray was second in the GIII Delaware Oaks July 4 and was fourth last time in the GIII Monmouth Oaks Aug. 1.

Out of the Curlin mare Lin Marie, Dream Marie has a yearling half-sister by Anchor Down in the Fasig-Tipton Sale. Consigned by Wynnstay Sales, the dark bay filly was bred by Wynnstay in partnership with GWR Consultants.