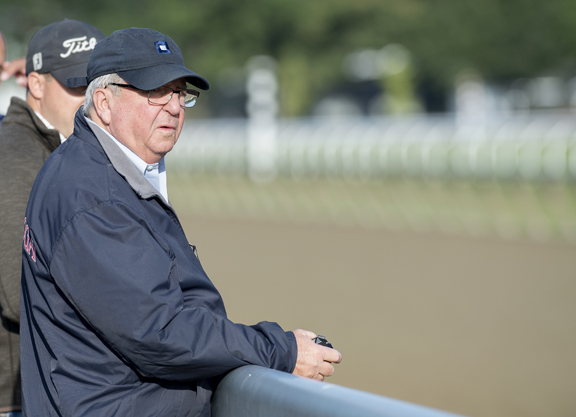 There was no better place to be in American horse racing than Belmont Park Wednesday morning as the track prepared to reopen New York racing later in the day after months of being shuttered by the coronavirus pandemic. That's where Hall of Fame trainer Shug McGaughey called in from as the Green Group Guest of the Week on this week's TDN Writers' Room podcast presented by Keeneland. In a wide-ranging discussion, McGaughey talked about the return of stable star Code of Honor (Noble Mission {GB}), racing finally resuming at his Big Sandy home base, his reaction to the FBI's indictments of Jason Servis and Jorge Navarro and more.

“He had a little bit longer vacation than I expected,” McGaughey said of Code of Honor, last year's GI Runhappy Travers S. winner and runner-up for champion 3-year-old male who is slated to make his return in Saturday's GIII Westchester S. at Belmont. “But I don't think that's hurt anything. We gave him off until the 1st of February and put him back in training, and he's an athletic type of horse, so it doesn't take a whole lot to get him ready, and I think he's ready. He had a good winter at Payson Park and his two works here at Belmont have been just as good as I can expect. We're looking forward to running him on Saturday.”

Asked about goals for Code of Honor's 4-year-old season beyond Saturday, McGaughey said, “The Metropolitan could be on the map, the Whitney can really be on the map, the Woodward or Jockey Club Gold Cup. Who knows how they're going to have those scheduled. We would definitely like to get to the Breeders' Cup, especially with it being at Keeneland, which has a special meaning for me and Mr. [Will] Farish. But we'll still let him tell us like we did last year.”

As the conversation turned to the much-anticipated start of the Belmont spring/summer meet, McGaughey commented, “I'm a Belmont guy. I'd rather train here than anywhere. I love the races here. I think for New York and for us, as racing people and in the sports world, getting Belmont going is going to be a big addition. This is the first big sporting event that's opened up here. I'm excited about it. I was getting a little flustered that we weren't getting open, but we're here now, all systems go.”

Known as one of the cleanest big-name trainers in racing, McGaughey was asked for his opinion on the bombshell indictments from March and what it's like, as a person who tries to do things the right way, to lose races to people he knows are cheating. The pill was especially bitter to swallow for McGaughey last year when Code of Honor finished second in the Eclipse voting behind Servis-trained Maximum Security (New Year's Day).

“Navarro never was a big problem for me, because I didn't run against him much, but Servis was,” he said. “I had a hard time with a horse that breaks his maiden for $16,000, winning the Kentucky Derby and Florida Derby and all that it did. I read every sentence of those indictments and it's pretty disappointing. It's also disappointing when I look at what the [indicted] veterinarians are doing, when most of the time, they've gotten an education and when they graduate they're sworn to uphold their doctors' commitment, and they're doing things that I think they know better that they shouldn't be doing. I'm hoping that, in the long run, we can get a hold on this thing, and that everybody feels like when they go over there, they've got an equal chance to everybody else.”

Elsewhere on the podcast, in the West Point Thoroughbreds news segment, the writers remembered the great Arrogate after Tuesday's news of his tragic death, and conducted a fantasy draft of 3-year-olds for a new contest that will run through the end of the Triple Crown. Click here to listen to the audio-only version, and click here to watch on Vimeo.