Showcasing Filly a New Rising Star At The Curragh 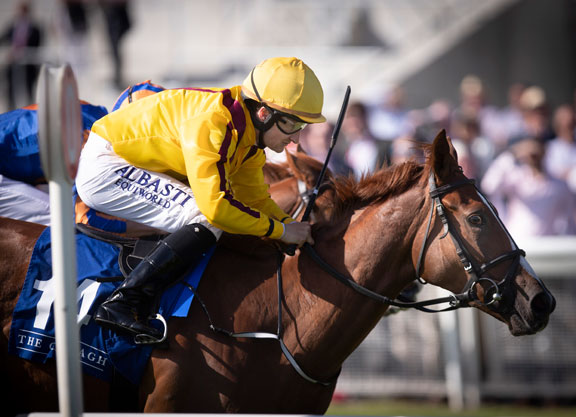 There was a buzz surrounding Stonestreet Stables’ newcomer Windracer (Ire) (Showcasing {GB}) ahead of Thursday’s Irish Stallion Farms EBF Fillies Maiden and the 11-4 second favourite did not disappoint by making virtually all and denying Ballydoyle’s 11-10 favourite Love (Ire) (Galileo {Ire}) by a neck. Sent to the fore by Shane Foley after the initial stages, having broken from a high number, the €240,000 Goffs Orby purchase who represents the Jessie Harrington stable had to work hard to see off her experienced rival but showed tenacity to come out on top. The Niarchos Family’s newcomer Innervisions (Ire) (Dubawi {Ire}) was 5 1/2 lengths back in third in a maiden that is certain to work out well. “She’s a fine big filly and has been really pleasing us at home,” Foley said of Windracer, who had won a barrier trial at Naas. “She had never come off the bridle at home and done everything so easily, so this was the first time she had to. I was drawn 15 and I wanted to be positive and although it was not ideal being in front she is straightforward. I’d say the first two are smart fillies–they picked up right the way to the line. If she gets a slight bit of ease in the ground, she’ll be better again.”

Windracer, the latest advert for the rising star sire Showcasing, is a half-sister to Windfast (Ire) (Exceed and Excel {Aus}) who proved a useful sprinter when winning the Listed Hopeful S. and finishing third in the G3 Abernant S., and also to Montalcino (Ire) (Big Bad Bob {Ire}). She stayed much further and finished second in the Listed Haras de Bouquetot Fillies Trial over a mile and a quarter before reverting in trip and running third in the seven-furlong G3 Oak Tree S. at Goodwood.

The second dam Fair of the Furze (Ire) (Ela-Mana-Mou {Ire}) took the G2 Tattersalls Rogers Gold Cup before producing White Muzzle (GB) (Dancing Brave) who proved such a star for the Peter Chapple-Hyam stable in the 90s. Runner-up in the G1 King George VI & Queen Elizabeth Diamond S. on two occasions and in the G1 Prix de l’Arc de Triomphe, the G1 Derby Italiano hero was also a half to the G2 Deutsches St Leger winner Fair Question (Ire) (Rainbow Quest). Fair of the Furze’s listed scorer Elfaslah (Ire) (Green Desert) was a smart broodmare herself, throwing a clutch of classy performers headed by the G1 Dubai World Cup and G1 Prix Jean Prat hero Almutawakel (GB) (Machiavellian) and the G1 1000 Guineas runner-up Muwakleh (GB) (Machiavellian). The dam Fair Sailing (Ire) (Docksider), a modest maiden for the John Hills stable who stayed a mile and a quarter at a low level, also has a yearling colt by Kodiac (GB).