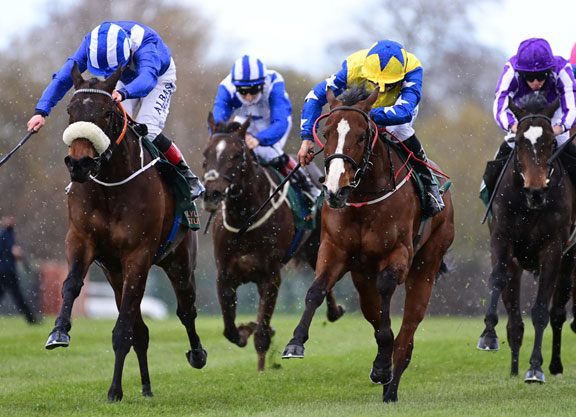 Sunday's G3 Ballylinch Stud “Priory Belle” 1000 Guineas Trial was one of the most competitive in recent times, with last year's G1 Moyglare Stud S. heroine Shale (Ire) (Galileo {Ire}) topping the list, and so it was with a deal of surprise that the winner was duly announced as the 80-1 shot Keeper of Time (Ire) (Mehmas {Ire}) for the John Feane stable. Fifth on her 3-year-old bow in the well-contested Madrid H. over this seven-furlong trip at The Curragh Mar. 21, the bargain €3,000 purchase at the 2019 Goffs February Mixed Sale was settled on the rail in mid-division early by Ronan Whelan. Working her way to the front with 150 yards remaining, she was determined to hold on by a head from the strong-finishing Mehnah (GB) (Frankel {GB}), as the 66-1 shot Sense of Style (Ire) (Zoffany {Ire}) finished a length back in third. “Kevin Manning thought she ran a cracker in the Madrid at the Curragh and she toughed it out well today,” Feane said after greeting his first group winner. “The better ground helped and she wants good ground. She's probably a filly that would suit America or somewhere like that. There were offers for her before, but there will probably be more on the table after this.”

Last month's Cheltenham festival and the Aintree Grand National meeting that immediately preceded this fixture hammered home the point that Irish-trained horses are in the ascendancy more than ever before. There have been frequent occasions over the past year when even the small Irish yards were able to land decent prizes and this was just another to underline just how much strength in depth there is in the country's racing. Keeper of Time was largely unremarkable at two, finishing adrift of St Mark's Basilica (Fr) (Siyouni {Fr}) on debut over six furlongs at The Curragh in August and last of 11 on her second start in the course-and-distance Listed Ingabelle S. on the Irish Champions Day card. Winning her maiden back over six just five days later at Naas, she was out again 10 days after that when seventh in the G3 Weld Park S. reverting to this trip at The Curragh. Her latest effort in the Madrid was boosted when the seventh-placed Erzindjan (Ire) (Lope de Vega {Ire}) scored at Gowran Park in the interim, but there was little suggestion she could find sufficient improvement to upset this host of bluebloods.

Keeper of Time is the second foal out of the Shadwell-bred Motheeba (Mustanfar), a 2,000gns cast-off at the 2011 Tattersalls Horses-in-Training Sale two months before she achieved a listed placing in Italy. A half to the Listed John Musker Fillies' S. runner-up Jabhaat (Hard Spun), she is a granddaughter of the G3 Princess Margaret S. winner Muhbubh (Blushing Groom {Fr}) whose best progeny was the GII Tom Fool H.-winning sire Kayrawan (Mr. Prospector). The latter's full-sister Sayedat Alhadh was to go on to throw the G2 Diadem S.-winning sire Haatef (Danzig), his stakes-producing and G3 Athasi S.-winning full-sister Walayef and the listed scorer and G1 Moyglare Stud S. runner-up Shimah (Storm Cat), in turn the dam of the smart sprinter Mushir (GB) (Oasis Dream {GB}). Muhbubh is also the ancestress of the G2 Rockfel S. winner Sayedah (Ire) (Darshaan {GB}), the G2 Duke of York S. winner and G1 Haydock Sprint Cup third Magical Memory (Ire) (Zebedee {GB}) and to Sandreamer (Ire) (Oasis Dream {GB}) who also captured the Princess Margaret. Motheeba's 2-year-old filly by Mastercraftsman (Ire) was bought for 52,000gns by Kevin Ross Bloodstock at the Tattersalls December Yearling Sale.