She's a Julie One to Remember for Bradley and Partners 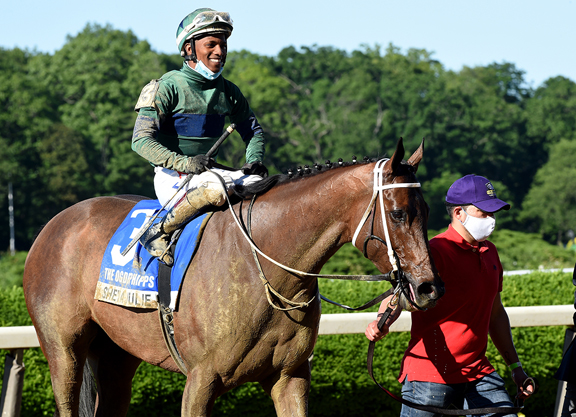 She's a Julie gets her second Grade I win in this year's Ogden Phipps S. | Chelsea Durand

Peter Bradley has hand picked a number of yearlings that have gone on to become top-class runners–from GISW and now-sire Klimt (Quality Road) to Eclipse Champion Lady Eli (Divine Park). And while he can distinctly recall the days when he purchased those eventual headliners, so too can he remember the yearlings that he passed on who would go on to do big things.

Bradley first saw She's a Julie (Elusive Quality) at the 2016 Keeneland September Sale, and while impressed with her physical, a simple vet issue kept him from bidding. She was purchased by Steve Asmussen as agent for Carol Castille's Whispering Oaks.

“I think the score is Julie one million and veterinarians zero on this one,” Bradley quipped. “Steve was smart enough to buy her as a yearling. She was beautiful; I absolutely loved her. She had size, balance and a beautiful head on her.”

Bradley watched from the sidelines as 'Julie' won on debut as a juvenile and claimed the GIII Iowa Oaks that next summer. Soon after, the opportunity arose for him to buy back in on the filly. He jumped at the chance.

Other partners would eventually get in on the ownership, including Tim and Anna Cambron, Denali Stud, Rigney Racing and Madaket Stables.

After that first graded stakes victory in 2018, She's Julie came back with a runner-up effort in the GI Alabama S. followed by a win in the GIII Remington Park Oaks.

A favorite in the Asmussen barn for her bright personality and namesake Julie Asmussen, She's a Julie claimed consecutive graded stakes wins in her first two starts as a 4-year-old, including her first Grade I.

“There are two races I remember the most in Julie's career,” Bradley said. “In the GIII Bayakoa at Oaklawn Park, she was much the best that day and came out of that race as good as a horse could come out. She was on her toes and in her feed tub, and we had high hopes coming into the GI La Troienne on Oaks Day. And she just did it. She ran her race. She came running from the three-eighths pole and got up in a great, gut-wrenching finish.”

“The highlight of her career in my opinion was on Oaks Day when she ran on the undercard in a Grade I and won,” he said.”Being in the Champagne Room just before they presented the trophy for the Oaks was quite a treat.”

She's a Julie got her second Grade I win this summer at Belmont in the GI Odgen Phipps S.

“She was genuine all the time, but the race she put in for the Ogden Phipps was her quintessential race,” Bradley said. “She had a lot to do coming down the stretch. Ricardo Santana fit her like a glove. He asked her for everything she had and she gave it to him. She was remarkable. She refused to lose that day.”

She's a Julie retired this fall after a four-year campaign as a millionaire with five graded stakes wins on her resume. She ran in the money in over half of her starts, including four Grade I contests.

“It's been a lot of fun to go to various tracks and watch her run,” Cambron said. “She always was in the game. You didn't know if you were going to win, but you knew you were going to be there at the end. But most of the time she won.”

Bradley added, “The thing about Julie was her consistency. She absolutely laid it on the line every time she ran. Her first Grade I on Oaks Day last year was something special, but the fact that she came back and won a Grade I this year was just icing on the cake.”

She's a Julie will be offered as Hip 208 at the Fasig-Tipton November Sale on Nov. 8 with the Denali Stud consignment.

“People are going to say, 'wow' when they come see She's a Julie,” said Fasig-Tipton's Boyd Browning. “She's just an awesome physical. When they lead her out, people are just going to kind of smile and grin and say, 'that's almost like the perfect conformation that you would design for a racehorse or for a broodmare. She's got great balance. She's got great presence. She's just one of those wow physical horses that will have everyone's eye.”

Bradley added that the 5-year-old's pedigree will be another attractive feature for buyers.

“Not only does she have the looks, but she's got the pedigree. Uniquely, she is one of some 35 fillies out of a Dubai Millennium mare, and her dam is a half-sister to the dam of [GISW and sire] Bodemeister (Empire Maker). The family is just deep with racing quality.”

“I think it's a great package being by Elusive Quality, who's emerging as a broodmare sire,” Browning said. “He demonstrated ability on a racetrack with his speed, and his progeny are demonstrating the ability to carry speed over distance. She's a Julie has been a top-class performer for several years now. She's certainly demonstrated her talent and her ability in the right places when the world was watching. She's been a pleasure to watch on the racetrack and it's a great opportunity for someone to add her to their broodmare band.”