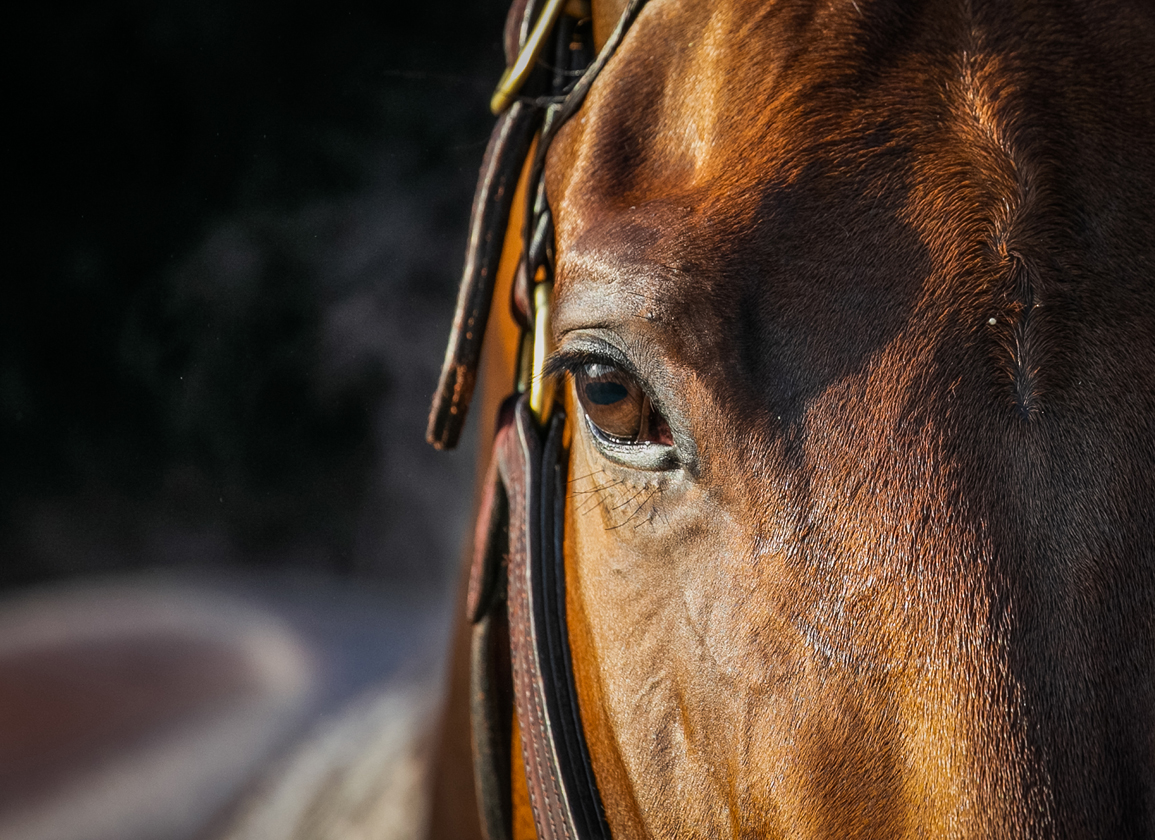 In less than three weeks, Shedaresthedevil (Daredevil–Starship Warpspeed, by Congrats) will follow the path of fellow Kentucky Oaks victress Monomoy Girl as she makes her way to the ring for the Fasig-Tipton 'Night of the Stars' Sale on Nov. 9. as a broodmare or racing prospect.

But like her Brad Cox-trained predecessor, she will first give her current owners the chance to get to the winner's circle one last time in the GI Longines Breeders' Cup Distaff.

Cox, who saddled Monomoy Girl to victory in last year's edition of the contest, is equally confident in the abilities of this year's Distaffer.

“She came out of her last race in really good order,” he said of the 4-year-old daughter of Daredevil. “She's had a couple of breezes since and they've both been good moves. We'll continue to keep her on a Saturday schedule and she'll ship out on Monday, Nov. 1 for Del Mar. We're confident that she'll make the ship in good order and that she'll put in a big performance.”

The expected favorite for the Distaff is, of course, the speedy Letruska (Super Saver), who has gone all-but-undefeated this year as she captured six graded stakes victories across the country. But Cox also points out her only loss this year in the GII Azeri S.

“Letruska will be favored, but we've run against her twice this year and it's even at one and one, so we're hoping we can win the rubber match,” he said. “In the Azeri, Shedaresthedevil ran a big race off the layoff and we felt like she was probably 90% ready, but she was able to establish a lead and hold off Letruska.”

Following her winning seasonal debut over the rival, Shedaresthedevil collected another victory in the GI La Troienne S. She was third behind Letruska in the GI Ogden Phipps S., but came back with winning efforts in the GI Clement L. Hirsch S. at Del Mar and the GIII Locust Grove S. in her final prep before the Breeders' Cup.

“It gives us confidence moving forward that she was able to put in a big performance in the Clement Hirsch,” Cox said. “She has some experience over the track and with shipping out and shipping back. She handled it extremely well and her last race was exactly what we wanted where she was able to get a good run and use it as a fitness tool to prepare for the Breeders' Cup.”

Fergus Galvin of Hunter Valley Farm has had close ties to the imposing bay filly throughout her career with his connection to Qatar Racing and has watched her mature physically over the past few years.

After a successful juvenile campaign that was marked by a debut win and two stakes placings in California for trainer Simon Callaghan and original owners Qatar Racing and Glencrest Farm, Shedaresthedevil was catalogued for the 2019 Keeneland November Sale.

“We had her here for a couple weeks before the sale and she was a big, kind of raw-looking filly,” he recalled.

Following her $280,000 sale, the filly was campaigned by a partnerhship including Staton Flurry's Flurry Racing Stables and Qatar Racing, for whom she finished second to stablemate Bonny South (Munnings) in Oaklawn allowance company in February 2020. Autry Lowry, Jr.'s Big Aut Farms joined the ownership ahead of her victory in the GIII Honeybee S. in Hot Springs the following month. As she progressed through her 3-year-old campaign, the filly flourished physically, Galvin said. 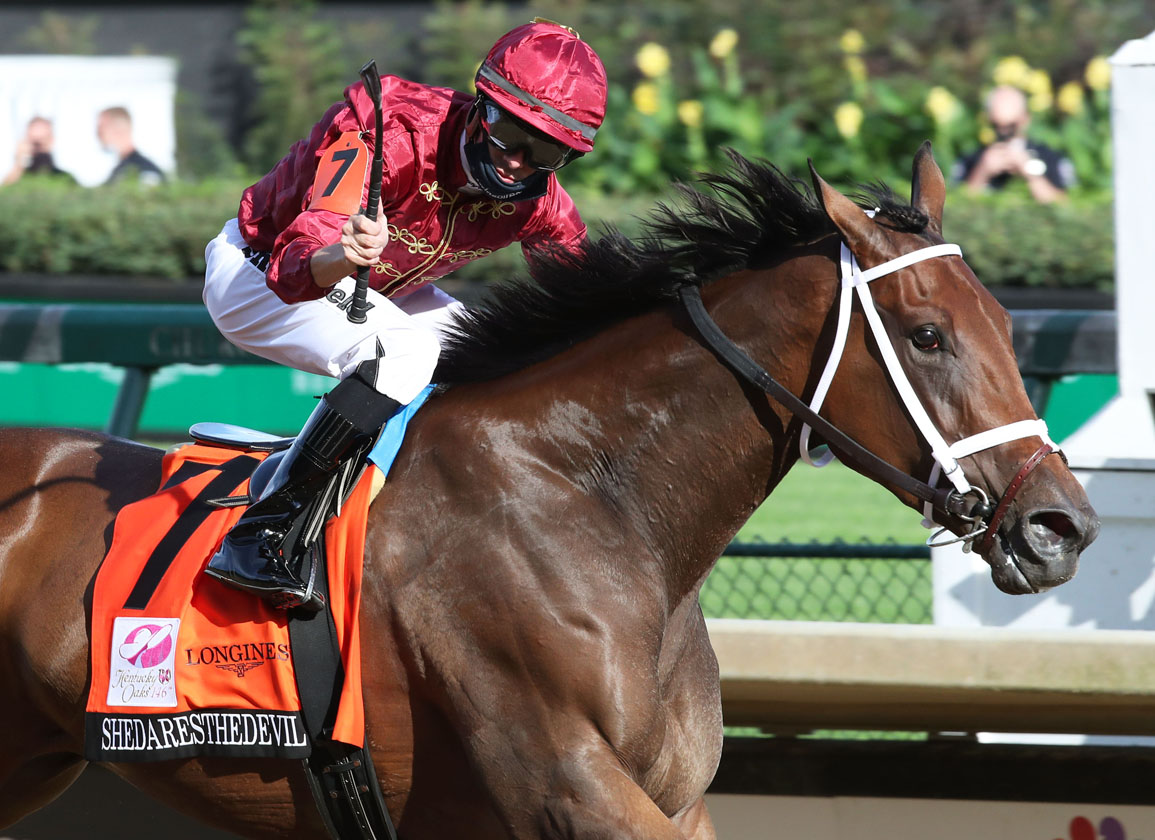 “She really blossomed into this big, beautiful filly,” he said. “She must be all of 16.2, but she's very well balanced for her size. I think she takes her racing and training really well. In almost two years of talking to Brad about workouts, he's never called to say that she hasn't worked well.”

Leading up to her start in a September renewal of the Kentucky Oaks, Shedaresthedevil added the GIII Indiana Oaks.

“When she went to Indiana, she more or less destroyed that field,” Galvin remembered. “That's really what got our minds thinking towards the Kentucky Oaks. Every work, she just got better and better leading up to it.”

Sent off at odds of 15-1 in front of a fan-less grandstand in Louisville, Shedaresthedevil bested Grade I-winning rivals Gamine (Into Mischief) and Swiss Skydiver (Daredevil) to set a Kentucky Oaks record time of 1:48.28.

“It came as kind of a slight surprise to the general public,” Galvin said of the victory. “But the one person it didn't surprise was Brad. He was always so high on her and was very confident going into the race.”

“She was a price and she rewarded the people that backed her,” her trainer said. “It was a tremendous group of fillies assembled that year. Her determination, grit and heart down the lane to stay in front was unbelievable. We were able to capture the Kentucky Oaks a couple of years ago with Monomoy Girl and when you win a race like that you're like, 'Wow, will you ever be back in this position?' To have her come back two years later and win was a great feeling, to say the least.”

For Cox, who won his first Eclipse Award as Outstanding Trainer in 2020, the filly has been a special member of his stable for the past two years.

“When we picked this filly up late in her 2-year-old season, we never envisioned what she would turn out to be,” he said. “She was a nice two year old, but she obviously moved forward at three and four. So she taught me a lot about how horses can develop. She's got a tremendous heart. I mean, she's been locked in battle a couple of times and she doesn't want to lose. She really is a fighter and she's cool to be around in the barn. She's a very straightforward, classy, sound filly.”

Cox added that it's been the ride of a lifetime for her owners.

“She's taken these guys on a dream ride,” he said. “Staton has followed her around the country and doesn't miss a race. Sheikh Fahad of Qatar Racing was able to show up for her last race at Churchill Downs and hopefully he'll be there for the Breeders' Cup. It'd be nice to have one last win with this partnership and then we'll see how it goes at Fasig-Tipton.”

Cox has a track record of taking a race filly's value into the stratosphere after the success of Monomoy Girl, a $100,000 yearling purchase that sold for $9.5 million, setting a world record for a racing/broodmare prospect, at last year's Fasig-Tipton November Sale. Just as Monomoy Girl returned to the starting gate this year, Cox said he believes Shedaresthedevil has all the potential to perform against top company as a 5-year-old. 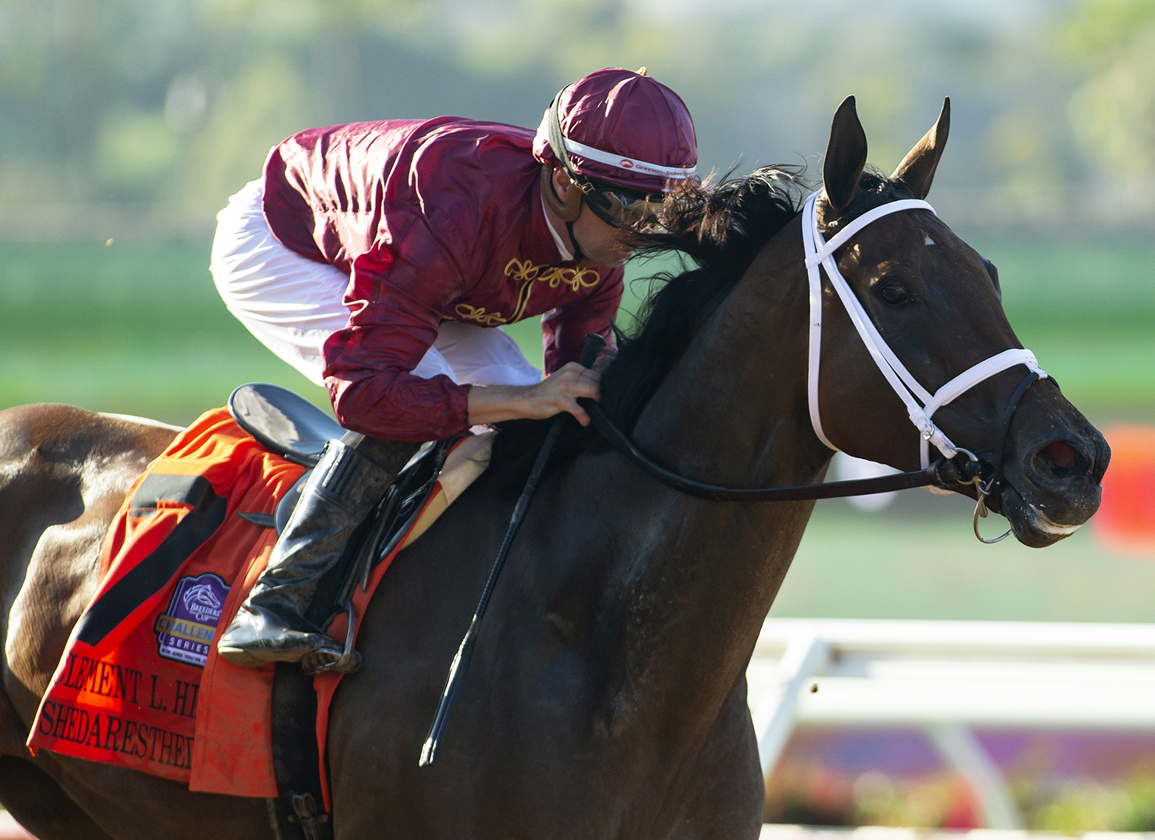 Shedaresthedevil gets the Grade I win at Del Mar in the GI Clement L. Hirsch S. | Benoit

“From a trainer, I think the one thing that stands out with me is just how sound she is,” he said. “That's probably the most important thing, but also with her size, she's a very big physical and a strong mare. So I do think there's some tread left on the tires, to say the least. She could definitely race at the age of five, there's no doubt about it.”

For Galvin, whose Hunter Valley Farm will consign the three-time  Grade I winner as hip 232 at Fasig-Tipton, the daughter of the winning Congrats mare Starship Warspeed offers a rare opportunity for buyers.

“There's obviously only one Oaks winner every year and so very few of them come on to market,” he said. “For an Oaks winner of her class, she's kept her form as good, if not better, this year. It's seldom you see a filly in the height of her racing career being offered for auction, so I think this is an opportunity for somebody to compete on the world stage with prize money at record levels throughout the country and abroad as well.”

Fasig-Tipton's Boyd Browning said that Shedaresthedevil offers the chance  for someone to own a piece of history.

“Not only is Shedaresthedevil a Kentucky Oaks winner, she's the fastest Oaks winner in nearly 150 years,” he said. “When you think about the fillies that have won the Oaks during that time frame, this is one of those Hall of Fame-type, record-setting performances. From a historical context, it's amazing.”

Browning noted that Shedaresthedevil's future as a broodmare can be projected through the brilliance she showed consistently on the racetrack.

“Shedaresthedevil will undoubtedly be a successful producer given her accomplishments on the racetrack,” he explained. “She demonstrated that brilliance, that 'wow factor,' on multiple occasions, which means there's a much higher likelihood of replicating that in her offspring.”

For whoever purchases Shedaresthedevil, Browning said the opportunities are endless.

“Her potential really is two-fold. You've got the potential as a racing prospect next year with some amazing purses out there around the world and you also think about the potential that she offers as a broodmare given her accomplishments and the resume that she's put together as a racehorse. So it's truly unlimited potential in multiple regards.”