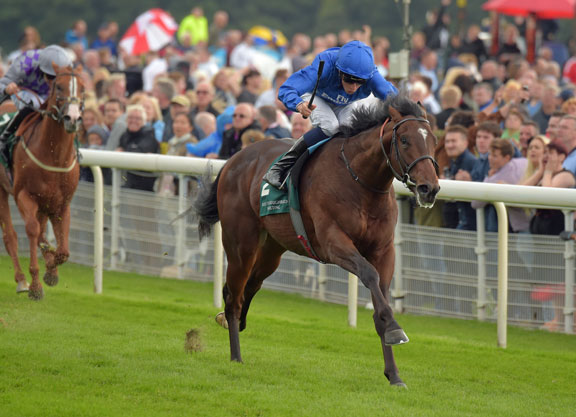 Having earned TDN Rising Star status when winning a Doncaster conditions race by 11 lengths July 14, there was obviously a hint of anti-climax when Blue Point was caught late by Mehmas (Ire) (Acclamation {GB}) attempting to make all in the G2 Richmond S. also at this distance at Glorious Goodwood July 28. Surprisingly brought back out quickly here, the bay attracted significant support which spoke volumes for his prospects and he was able to track the pace this time under William Buick. Committed on the front end with 1 1/2 furlongs remaining as the lead fell away in front of him, he drew away for an impressive success in a rapid time for the conditions with the Listed Rose Bowl S. winner Mokarris and solid black-type performer The Last Lion giving the form a solid look. The only negative of the race was the pulling-up after halfway of the G2 Railway S. third Dream of Dreams (Ire) (Dream Ahead).

His rider was impressed by the feel the half-brother to the G2 Railway S. winner Formosina gave him and said, “He's one of the best two-year-olds I've ridden. I kept it simple and that was a very good performance. He got a lead for a little bit, but his cruising speed is so high it's very hard to get a lead for as long as you want to. He's doing everything right at the moment and I can't see why an extra furlong wouldn't suit, but he has so much natural pace. Either way, he's very exciting.”

Having spoken of going up in trip immediately after the Richmond, connections are now leaning towards staying at six with the G1 Middle Park S. at Newmarket Sept. 24 on the agenda. His family's most accomplished performers all excelled below a mile, with the seven-furlong specialist Tumbleweed Ridge (GB), the G2 Queen Mary S. winner Gilded (Ire) (Redback {GB}) and current Eddie Lynam-trained sprinter Fort del Oro (Ire) (Lope de Vega {Ire}) adding weight to the case for sticking at the speedier tests. “I think the logical thing to do is to go straight to the Middle Park, but we'll get him back home and have a chat,” trainer Charlie Appleby said. “It would be great if he stayed a mile, but at this stage it looks like he's going to be a sprinter. Willie Ryan rides him at home and has done a great job. He's always been very impressed by him and when he likes one they are usually pretty good.” John Ferguson added, “He ran very well at Goodwood, where he was beaten by a horse with a huge amount of experience and what you want to see with these two-year-olds is real progression. We saw that today, with William being able to settle him and when he asked the question he showed what he is capable of. It was an impressive performance and all credit to the team for producing him like that today. He is very adaptable and it's early days, but his pedigree suggests speed is going to be his game. During the course of the next few months we can work it out and Sheikh Mohammed enjoys making those decisions.”

Mokarris's trainer Simon Crisford said of the runner-up, “These races are so hard to win and he travelled so well throughout the race, but bumped into one too good for us on the day. I think he's a very smart colt and hopefully we'll get very fast ground at Ascot next year for the G1 Commonwealth Cup. He's that type of quality. It's just a little bit loose on top and Paul [Hanagan] felt it took him a while to get organised and he didn't show the same gears as at Newbury, but take nothing away from the winner.” Dream of Dreams was reported none the worse for his dramatic exit from the race and trainer Kevin Ryan said, “He's 100 per-cent sound, but Jamie [Spencer] felt he had done something serious and had gone wrong on him. Wisely, he pulled him up and these things happen.”