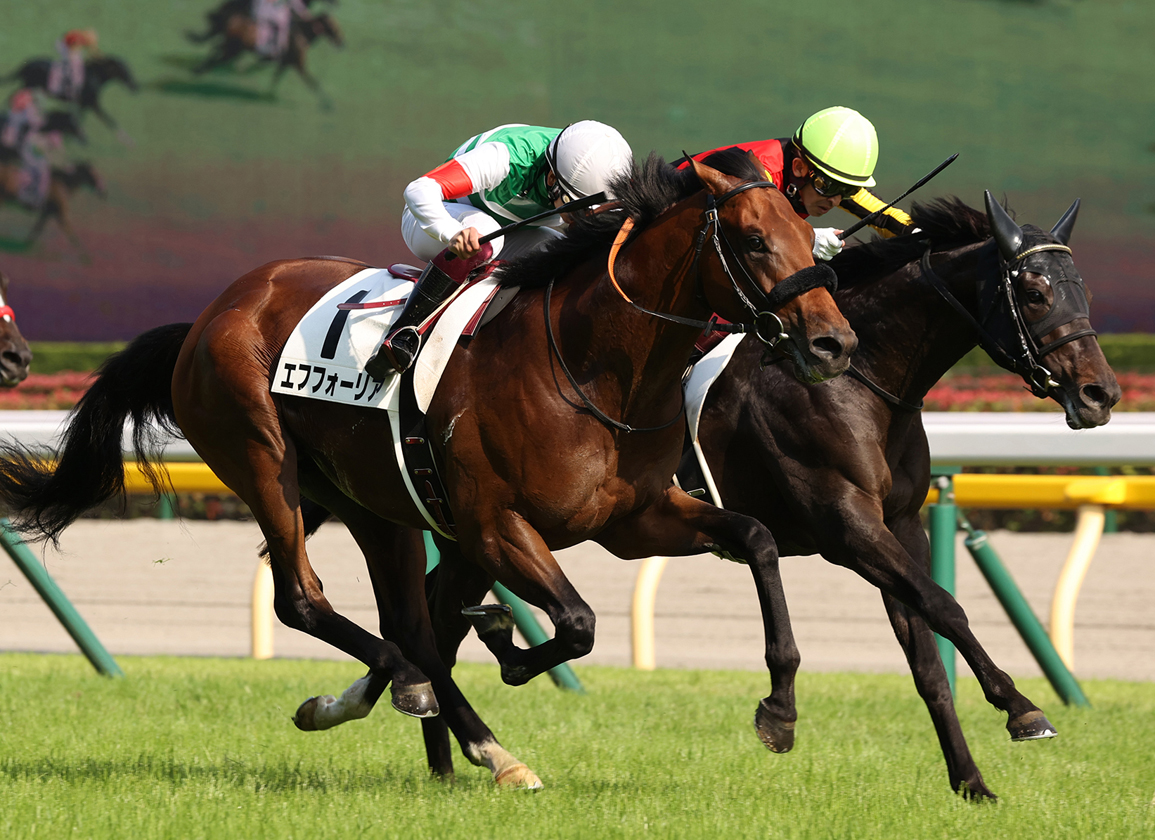 Sent off at 10-1, Shahryar was rank and tugging for more rein while in close quarters in midpack into the first turn. He was still a touch keen on the backstretch run in between horses as Bathrat Leon (Jpn) (Kizuna {Jpn}) cut out fractions of :22.80 for the quarter, :48 flat for the half mile and six furlongs in 1:12.70. Within striking distanceof  the frontrunners approach the far turn, his traffic woes continued and he was forced five deep in the hunt for racing room as the field began to fan wide at the 600-metre mark.

Still boxed in, Shahryar's momentum was halted shortly thereafter and he was steered back towards the centre of the course inside the final quarter mile. Efforia had enjoyed a ground-save trip meanwhile and cut through a gap to take control with 250 metres remaining.

The Sunday Racing colourbearer had finally found his rhythm however, and was firing on all cylinders down the lane as he switched to the favourite's left and saw daylight. The duo matched strides for the final furlong, with the bob at the line going to Shahryar by a nose. Efforia was gallant in defeat and the margin back to Stella Veloce (Jpn) (Bago {Fr}) was 1 1/4 lengths. Great Magician (Jpn) (Deep Impact {Jpn}) was another nose back in fourth.

“It's so great to have won the Derby which I had made it my target with this colt ever since his debut,” said pilot Yuichi Fukunaga, who had won Japan's Blue Riband in the past with Wagnerian and Contrail. “We were keeping an eye on the race favorite but the race didn't go as smoothly as planned and we were in a tight spot so we were forced to make our charge late, but this colt really gave a terrific effort.”

A winner of a Kyoto newcomer affair last October, the dark bay ran third to Efforia in the G3 Kyodo News Hai on Valentine's Day making his 4-year-old bow. He returned with a win in Hanshin's G3 Mainichi Hai in a new race record of 1:43.90 for the 1800 metres over firm turf on Mar. 27.

Pedigree Notes
The winner, the 49th Group 1 winner for his late sire, is a full-brother to the 2017 G1 Japanese 2000 Guineas and G1 Osaka Hai victor Al Ain (Jpn) (Deep Impact {Jpn}), and is one of five winners from six to race for his accomplished dam who landed the GI Breeders' Cup Filly & Mare Sprint in 2010, the same year she was named Eclipse Champion Female Sprinter Stateside. Sold for $1.1 million to Katsumi Yoshida at the 2010 Fasig-Tipton November Sale, Dubai Majesty has a 2-year-old colt by Heart's Cry (Jpn) and was covered later that year by Lord Kanaloa (Jpn), but did not produce a foal in 2020. The half-sister to MSW Majestic Dinner (Formal Dinner) was bred to Duramente (Jpn) last spring.