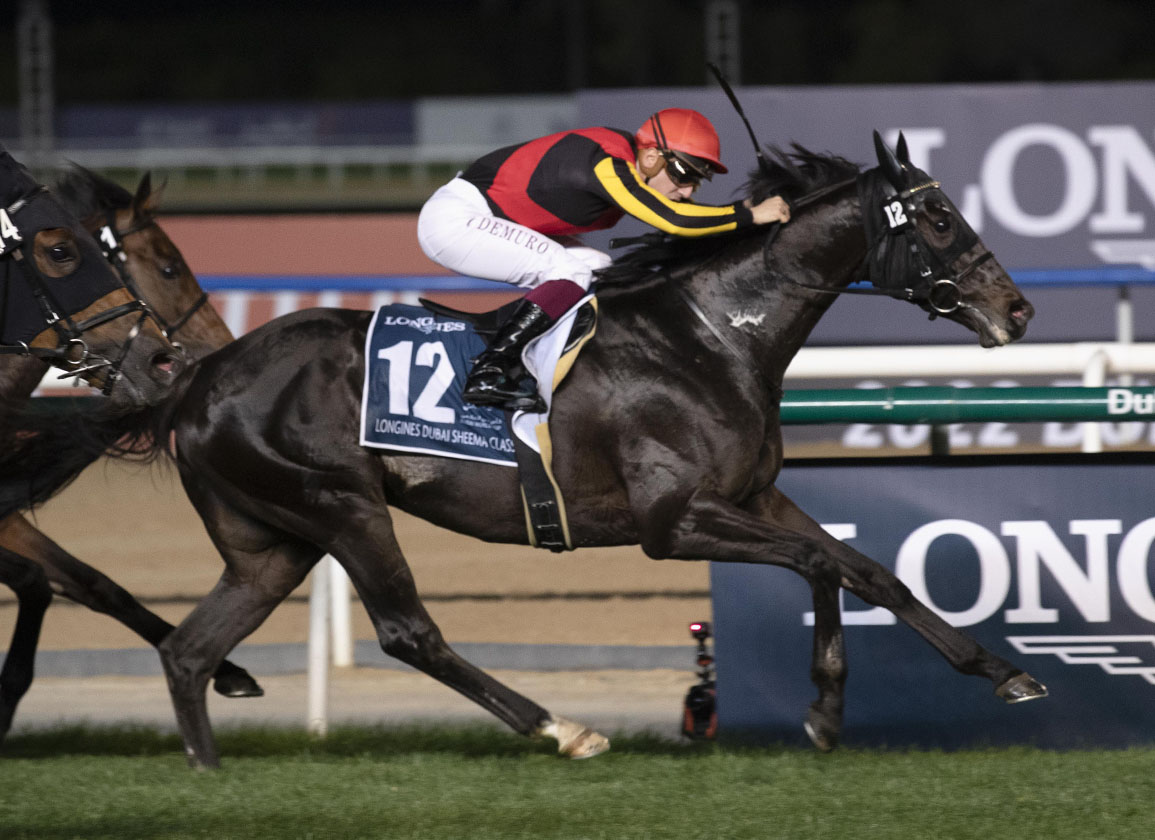 Of the eight races for Thoroughbreds on the $30.5-million Dubai World Cup night, five of them went to horses owned, bred, and trained in Japan. Granted, $5-million G1 Dubai Turf winner Panthalassa (Jpn) (Lord Kanaloa {Jpn}) had to share his victory with His Highness Sheikh Zayed bin Mohammed Racing's now-dual Turf hero Lord North (Ire) (Dubawi {Ire}), but that is cold comfort to other countries, who struggled to get near the winner's circle.

The night started out in much the same fashion as the Saudi Cup card in Saudi Arabia on Feb. 26 where Japan went four-for-six, with a Japanese victory, as Bathrat Leon (Jpn) (Kizuna {Jpn}) won the $1-million G2 Godolphin Mile, the second race on the card. Japan's G3 Longines Red Sea Turf H. victor Stay Foolish (Jpn) (Stay Gold {Jpn}) used his Saudi prep as a springboard to G2 Dubai Gold Cup honours, and it was only in the G1 Al Quoz Sprint that the Japanese contingent drew a top-three blank, as A Case Of You (Ire) (Hot Streak {Ire}) surged away to win by 1 1/4 lengths, putting Ireland on the board.

Back on dirt, Crown Pride (Jpn) (Reach the Crown {Jpn}) punched his ticket for the GI Kentucky Derby with a 2 3/4-length score in the G2 UAE Derby. Red Le Zele (Jpn) (Lord Kanaloa {Jpn}), second in the 2021 G1 Golden Shaheen, once again completed the exacta in this year's version, as Speightstown ironhorse Switzerland belied his years for a cozy triumph. After Panthalassa's tie with Lord North, Authority (Jpn) (Orfevre {Jpn}), who had also taken a Group 3 in Riyadh on Saudi Cup day, charged around the course in front for much of the G1 Dubai Sheema Classic, but as he gave way, countryman Shahryar (Jpn) (Deep Impact {Jpn}) took over to lift the evening's biggest turf prize, fending off GI Breeders' Cup Turf winner Yibir (GB) (Dubawi {Ire}) by a neck. Although the G1 Dubai World Cup went to Country Grammer (Tonalist), Japan still picked up some prizemoney, as the 2021 runner-up Chuwa Wizard (Jpn) (King Kamehameha {Jpn}) reported home third to cap a red-letter day for the island nation.

The Japanese have been aggressively upgrading their country's bloodstock from the highest tier of international racing and breeding prospects for several decades. They have now been well-rewarded on the world stage.

'Shah'king up the World Order

Already a winner of the G1 Japanese Derby, Shahryar (Jpn) (Deep Impact {Jpn}) was one of five horses to represent his country in the $5-million G1 Longines Dubai Sheema Classic on Saturday. Just 2:26.88 seconds after the gates flew, he became the fourth Japanese winner of the 2410-metre turf showpiece and fifth individual scorer on the night for Japan, which has enjoyed some stellar performances around the world in the past few months. Stay Gold (Jpn) (Sunday Silence) landed the 2001 edition, and fellow top sire Heart's Cry (Jpn) (Sunday Silence) stamped his name on the trophy in 2006. The final former winner was international wondermare Gentildonna (Jpn) (Deep Impact {Jpn}), who accomplished that feat in 2014.

The John and Thady Gosden-trained Yibir (GB) (Dubawi {Ire}) was only a neck back in second, a half-length to the good of the pacesetting Authority (Jpn) (Orfevre {Jpn}), who denied Group 1 winner Pyledriver (GB) (Harbour Watch {Ire}) by a short head.

Once the gates flew, Authority steamed up to take command, with Shahryar in that foe's slipstream and Alenquer (Fr) (Adlerflug {Ger}) sitting third. Pyledriver was also tucked in an ideal position hugging the fence a few lengths off of the leaders. For The Top (Arg) (Equal Stripes {Arg}) perched just off the inside behind the leader and Yibir raced dead last.

Freewheeling and in a relaxed rhythm on the front end, Authority entered the backstretch with the field well strung out behind him. For The Top kept Authority honest in the vanguard as the pack neared the final bend, and Burgas (Tur) (King David) launched a middle move, three deep.

A gap opened inside the final 500 metres, and pilot Cristian Demuro quickly gave Shahryar his cue. Poised to pounce with less than a quarter mile to travel, Shahryar let down strongly and began to eat into Authority's lead. Yibir, meanwhile, was winding up out in the centre of the course and what had appeared an impossible task, to get the boys in blue a winner on the night, suddenly seemed highly likely. Right as Shahryar grabbed the baton from Authority at the furlong grounds, the Godolphin runner unleashed a furious rally.

The Classic hero finally subdued a stubborn Authority and had enough left in the tank to just hold off an indomitable Yibir. It was very tight for third, with Pyledriver giving a good account of himself, but just losing out to the pacesetter.

Winning trainer Hideaki Fujiwara, who had saddled Vin De Garde (Jpn) (Deep Impact {Jpn}) to a third-place finish in the G1 Dubai Turf one race earlier on the card, said, “This horse was a winner of the Tokyo Yushun, the Japanese Derby, and that is as good a race as we have in Japan. I was confident that he wasn't going to lose.

“It's very normal for him to get on his toes before he races so I wasn't too concerned and I had full faith in Cristian [Demuro] to handle the horse and take care of him during the race.”

Europe's greatest weight-for-age race, the G1 Qatar Prix de l'Arc de Triomphe, at the beginning of October, is now the aim for the Sheema Classic scorer.

Added Fujiwara, “It would be a dream for me to take this horse to the Prix de l'Arc de Triomphe. It is the race we want to win and it would mean so much to be able to take him there. That is our ambition and our aim.

Said Demuro, “Before the race, I knew I wanted to be behind Authority as I knew he would lead. We were able to get a nice position just behind him on the rail and when I pulled my horse out in the straight I knew he was going to win.

“For a moment he was a little lost in front, but we felt Yibir coming and I always believed we were going to get there.

“It is amazing to win a race like this. Amazing also to win on a Japanese horse. They are showing they are the best in the world.”

William Muir, trainer of Pyledriver, said, “He's run a great race, travelled powerfully but probably didn't get all the luck in running, but I can't complain. I'm delighted for the horse and the owners and I'm looking forward to the season ahead back home.”

“It was a super run and he didn't get the splits at the crucial moments, but I'm very happy with him,” said pilot Frankie Dettori of the 2021 G1 Coronation Cup hero.

Lightly raced, Shahryar was a debut winner in October of his 2-year-old year, and returned at three to take third in the G3 Kyodo News Hai (Tokinominoru Kinen) on Valentine's Day in 2021. The G3 Mainichi Hai went his way going 1800 metres on firm turf that March, and he bested eventual Japanese Horse of the Year Efforia (Jpn) (Epiphaneia {Jpn}) by a nose in the 2400-metre G1 Japanese Derby on May 30. Given a break, he returned to be fourth to Stella Veloce (Jpn) (Bago {Fr}) in the G2 Kobe Shimbun Hai at Chukyo on Sept. 26, and his final start prior to his Dubaian heroics was a third to Japanese Triple Crown Winner Contrail (Jpn) (Deep Impact {Jpn}) in the Nov. 28 G1 Japan Cup.

The legendary Deep Impact's influence is still front and centre in Japanese bloodlines, and the winner is one of 54 Group 1 winners from the late Shadai kingpin. Shahryar is the second winner of the race after his paternal half-sibling Gentildonna (Jpn), who scored in 2014. Loves Only You (Jpn) (Deep Impact {Jpn}) was third in 2021, and Last Impact (Jpn) (Deep Impact {Jpn}) also filled that spot in the 2016 edition. Through Saturday, the son of GI Kentucky Derby hero Sunday Silence is responsible for 184 black-type winners, with 147 of them in group company.

Broodmare sire Essence of Dubai, best known as the winner of the GII Super Derby, GII Norfolk S. and the 2002 versions of the G2 UAE Derby and G3 UAE 2000 Guineas, has three black-type winners to his credit, as well as the graded-placed Unbridled Daddy (Scat Daddy).

Shahryar, one of five winners for his dam, is a full-brother to dual Group 1 winner and fellow Classic winner Al Ain (Jpn) (Deep Impact {Jpn}), who won the Japanese 2000 Guineas in 2017. The duo are out of the 2010 Eclipse Champion Female Sprinter Dubai Majesty (Essence of Dubai), who struck in the GI Breeders' Cup Filly and Mare Sprint that same year. She was knocked down for a cool $1.1 million to Katsumi Yoshida at the Fasig-Tipton November Sale and sent to Japan. The dam's latest foal is a yearling colt by Duramente (Jpn), and she was covered by Real Steel (Jpn) last spring.