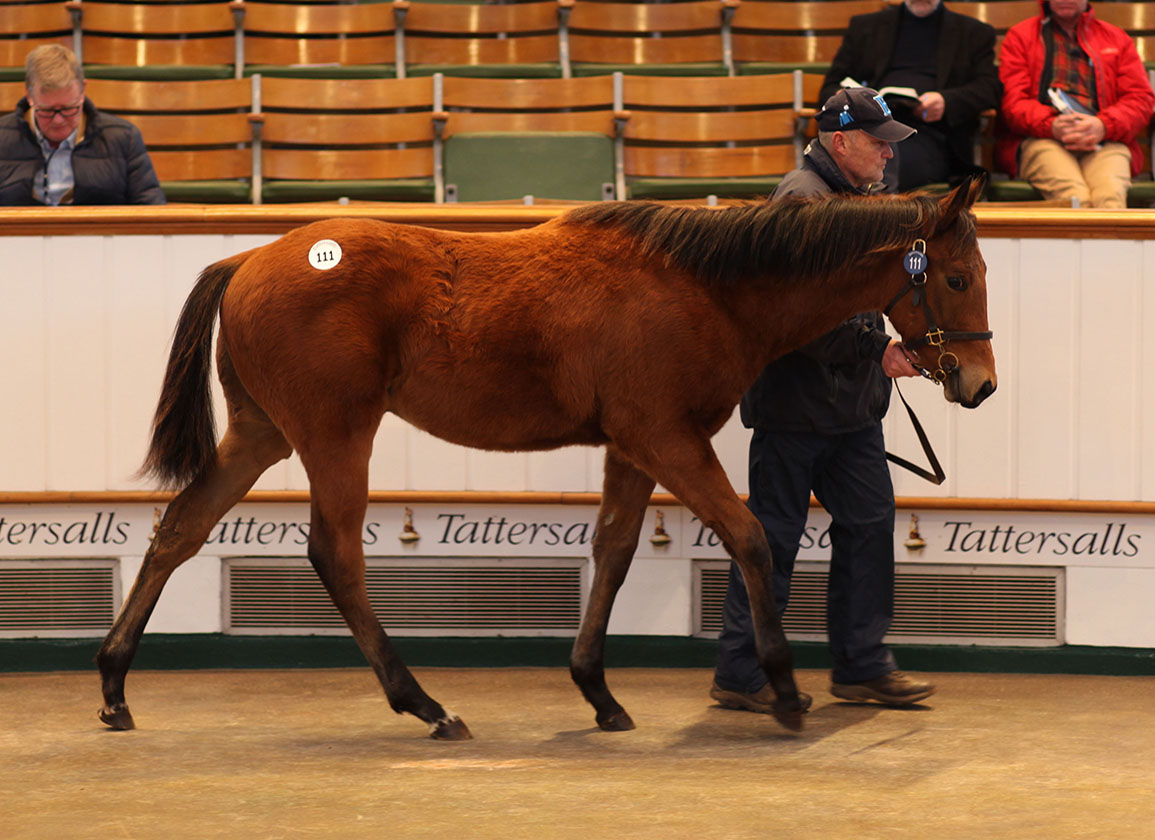 NEWMARKET, UK–There was a true blue feel to the first day of the Tattersalls February Sale, with the partial dispersal of Shadwell stock and a sizeable draft from Godolphin dominating the leader board and accounting for all five of the six-figure lots to have changed hands during a strong opening session.

Barring 2018, when several members of the Ballymacoll Stud dispersal set new record prices for February, the average of 18,311gns was the highest seen at this sale, and was not far from double the figure set 12 months ago. The day's clearance rate was up 15 points at 82% for 170 sold from 208 offered, bringing a first-day aggregate of 3,112,800gns (+168%). With the sale staged under normal conditions this time, compared to the virtual auction of 2021, the median also improved by 57% to 9,000gns.

Over the next few weeks pinhookers have their final chances to add to their autumn yearling drafts, and one we are likely to see back at Park Paddocks come October was the session's top lot, a colt by Night Of Thunder (Ire) from the dynasty of the top-class producer Magnificient Style (Silver Hawk). Already a half-brother to listed winner Moqtarreb (GB) (Kingman {GB}) and Group 3-placed Khaloosy (Ire) (Dubawi {Ire}), the yearling also has a 2-year-old half-sister by Shamardal set to race.

The Shadwell colt sparked plenty of interest from potential buyers, but it was the trio of Anthony Stroud, Eugene Daly and James Hanly who had the most staying power, finally securing lot 111 for 175,000gns.

“Night Of Thunder has done really well and the dam has already produced two stakes horses,” Stroud said. “He's got a really good back pedigree and he'll be back here for resale.”

Out of the Dalakhani (Ire) mare Elshaadin (GB), a grand-daughter of Magnificient Style, the colt's relations include the Group 1-winning full-siblings Nathaniel (Ire) and Great Heavens (Ire), both by Galileo (Ire), and their three-parts-brother, the G2 Yorkshire Cup winner Percussionist (Ire) (Sadler's Wells).

The 7-year-old mare Anasheed (GB) (Frankel {GB}), sold for 130,000gns to Richard Brown, was offered barren but already has youngsters on the ground by Siyouni (Fr) and Sea The Stars (Ire) and will likely be covered next by Ardad (Ire). A half-sister to the listed winner Hadaatha (Ire), Anasheed (lot 55) won once in three starts for Owen Burrows.

“She only ran three times but was rated 93 so it's probably fair to say that she was of stakes calibre,” Brown said. “Her first two foals are nice. The Siyouni colt is now with Owen Burrows and the Sea The Stars filly is rated highly. She has a lovely page and a lot going for her.”

Among those from the Shadwell offerings who will be racing on for new connections is Mashaaer (GB), a 3-year-old daughter of Muhaarar (GB) who posted an eye-catching performance on her sole start for Richard Hannon last season when finishing runner-up at Ascot over a mile. Sold as lot 60 for 105,000gns, she won't have far to go on leaving Tattersalls as she will join the Newmarket stable of Henry Spiller for owner Jonathan Sarkar, who plans to breed from Mashaaer in the future.

Acting for Sarkar, agent Jamie Lloyd said, “Jonathan has three mares with us on the farm and horses in training with Henry.”

He continued, “The form of her first race, you don't make private offers on Shadwell horses, but if you had done, you would have been offering in the region of £250,000. We just felt she is a filly that down the road, even at this price, she could look cheap. Jonathan is looking for something a bit better and a bit nicer to add to his string.”

With farther to travel is lot 70, a 2-year-old filly by Exceed And Excel (Aus) who will be heading to Dubai to join the stable of Satish Seemar. Tattersalls' marketing manager Jason Singh conducted the bidding on the trainer's behalf, going to 105,000gns for the first foal of the winning Dubawi (Ire) mare Nawassi (GB).

“Satish is looking for recruits for the next season in the Middle East,” said Singh. “He went through the catalogue himself, put a short list together and got the horses vetted here. She was his pick of the 2-year-olds.”

Memories In the Making

The unraced Sea The Stars (Ire) filly Good Memories (lot 257) topped those sold from the Godolphin draft when knocked down at 100,000gns to Sam Sangster. A daughter of the treble stakes winner Khor Sheed (GB) (Dubawi {Ire}), the 4-year-old is from an active family which includes last season's Listed Godolphin S winner, her half-brother Without A Fight (Ire) (Teofilo {Ire}), while her half-sister Sharja Princess (GB) (Invincible Spirit {Ire}) is the dam of stakes winner Avenue De France (Fr) (Cityscape {GB}). Khor Sheed is herself a half-sister to G1 Prix d'Ispahan winner Prince Kirk (Fr) (Selkirk).

“She's been bought for a small breeder and she will go to Tom Blain at Barton Stud,” said Sangster. “She'll possibly go to Pinatubo this year. There are some nice options for her and I think she could be good value.”

With plenty of young stallions on their books, the team from Tally-Ho Stud was busily recruiting new mares for the farm. The group included lot 152, Iconic Look (GB) (New Approach {Ire}), who is out of a Dubawi half-sister to Derby winner Masar (Ire), bought for 60,000gns, and lot 44, Duchess Rose (Ire) (Dream Ahead), for 52,000gns. The latter, who has just turned four, looks particularly well bought as her page was given a major boost last season by her Group 2-winning half-brother Bayside Boy (Ire) (New Bay {GB}), who landed the Champagne S. for Roger Varian and was then third in both the G1 Dewhurst S. and G1 Futurity Trophy. Duchess Rose is also a half-sister to the G2 Huxley S. winner Forest Ranger (Ire) (Lawman {Fr}) and she has first-season sire Starman (GB) pencilled in for her initial mating.

Caoimhe Doherty made a quick double signing for a pair of well-related mares from the Godolphin draft to add to the team at Tony Smurfit's Forenaghts Stud, where she has been manager for the past year.

The 6-year-old Moment Of Silence (Ire) (Slade Power {Ire}), in foal for the first time to Too Darn Hot (GB), was the first to be added to the fold at 95,000gns. With an official rating of 92 from her win and two placings as a 3-year-old, the mare (lot 169) is a grand-daughter of the Irish 1000 Guineas winner Nightime (Ire) (Galileo {Ire}), with her stakes-placed dam Sleeping Beauty (Ire) being an Oasis Dream (GB) half-sister to 2020 Horse of the Year Ghaiyyath (Ire) (Dubawi {Ire}).

Following her into the ring was lot 171, Luceita (Ire) (Dawn Approach {Ire}), with an equally appealing cover by Invincible Spirit (Ire), who was bought for 90,000gns. The 7-year-old is a half-sister to G2 Rockfel S. winner and Irish 1000 Guineas runner-up Lucida (Ire) (Shamardal). Their dam Lura (Street Cry {Ire}) is a half-sister to the multiple Grade I winner and sire English Channel (Smart Strike).

“She's a sister to a very good filly,” Doherty said of Luceita. “They were both good race fillies and they are in foal to good stallions. We tried really hard to buy decent race fillies and mares here in December and it's hard to get a filly rated in the 90s.”

Another from the Godolphin draft, Sacred Jewel (GB) (Dubawi {Ire}), will be joining Julie Camacho's Yorkshire stable after the trainer went to 95,000gns for lot 164, a daughter of the G2 Temple S. winner Priceless (GB) (Exceed And Excel {Aus}).

Camacho said, “She has residual value as daughter of Dubawi, but hopefully we can have a bit of fun with her first. We've watched all her races, and my husband spoke to Charlie Appleby who recommended her.”

The concluding session of the February Sale gets underway at 10 a.m. on Friday.