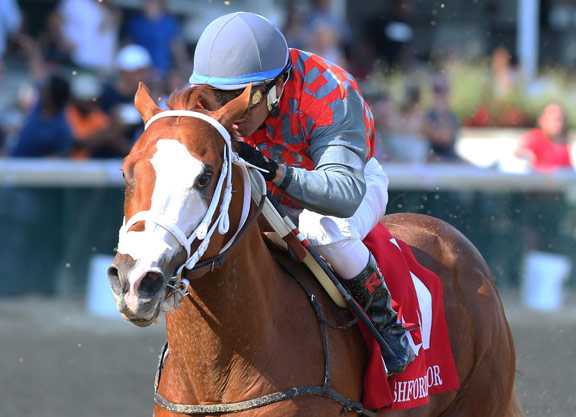 Phantom Boss ran to the hype, garnering his first black-type win in the GIII Bashford Manor S. at Churchill Downs Saturday. Missing by a neck to next-out Tremont S. winner Fore Left (Twirling Candy) on debut at Santa Anita May 19, he went wire-to-wire next out against fellow Cal-breds in Arcadia to graduate by 2 1/2 lengths June 2.

Favored in this black-type bow and return to open company, the chestnut tracked from third, running off the fence as fellow California raider Verb zipped through an opening quarter in :21.84. Second-choice Rowdy Yates stuck his nose in front on the backstretch run, but Verb stuck with him as Phantom Boss ranged up three wide. Phantom Boss swept past the top two in the final sixteenth and Rowdy Yates surged late in an attempt to get to him, but it was too late. Phantom Boss crossed the line three-quarters of a length clear of that foe with Verb hanging on for third.

“I told my wife this is the best place in the world to be,” said winning conditioner Jose Periban. “It is such a beautiful track and I hope to be back here in the spring. When we debuted this horse in open company and he only got beat a nose I knew we had something special. I told the owners that he could have a very bright future. Today's performance was unbelievable. I love Kentucky and can't wait to come back.”

“I always believed in this horse since I started working him as a baby,” said winning rider Rafael Bejarano. “He has always been so intelligent ever since I got on him. He debuted for maiden special weight in open company and ran an awesome race. The one thing that has been so special about this horse is not only has he been improving in his performances on the track but he's been improving mentally. Today, breaking on the rail, I knew there would be some speed to my outside. We were able to sit a great trip just behind them and get around them at the top of the lane.”

Phantom Boss is the sixth graded stakes victor and ninth black-type scorer for his sire Shackleford. The winner is the first foal out of Bossy Belle, whose only foal since is a yearling filly by Empire Way. She was most recently bred back to the same stallion.