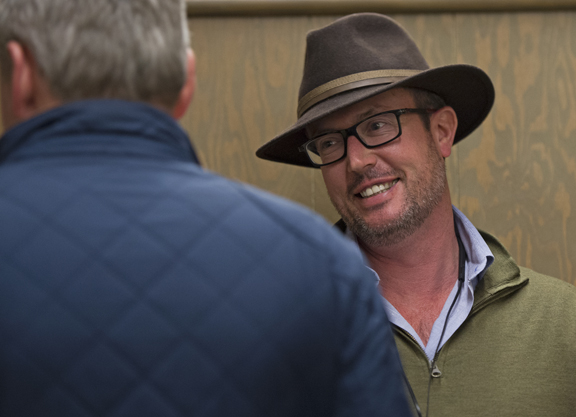 SF Bloodstock was a dominant buying presence at last year’s November bloodstock sales in Kentucky and the organization will re-offer several of its high-profile 2016 purchases at the upcoming November sales.

During the Fasig-Tipton November sale, the operation purchased eight head for $3,845,000, including the $1.4-million Cathryn Sophia (Street Boss), $900,000 Illuminant (Quality Road) and $650,000 Pricedtoperfection (Temple City). In partnership with Newgate Farm, SF Bloodstock purchased an additional four head out of Newtown Paddocks for a total of $1,585,000, including $800,000 Al’s Gal (English Channel).

SF Bloodstock’s buying spree continued at the Keeneland November sale, where the group purchased 19 horses for $9,745,000. Included in the package was $1.7-million Paola Queen (Flatter) and $1.5-million My Conquestadory (Artie Schiller).

“There were a number of reasons we were actively buying last year,” SF Bloodstock’s Tom Ryan said. “We are heavily invested in the stallion roster at Newgate Farm in Australia and we were retiring four extremely exciting prospects to stud, including the G1 Golden Slipper winner, the G1 Blue Diamond winner and the world champion 3-year-old sprinter under the Longines World Racehorse Rankings. We are committed to giving these horses every possible chance at stud, so we have built a world-class broodmare band to support them and much of our buying activity was directed at that goal.”

Illuminant, who went postward three times this year for the partnership of Eclipse Thoroughbred Partners, Head of Plains Partners and SF Racing, won the GII Monrovia S. in May. The broodmare prospect will sell during Monday’s Fasig-Tipton November sale as hip 188 with the Bluewater Sales consignment.

Cathryn Sophia, who won the 2016 GI Kentucky Oaks, will go through the sales ring during Tuesday’s first session of the Keeneland November sale. The 4-year-old mare (hip 30) sells through Bedouin Bloodstock in foal to Pioneerof the Nile.

“We found ourselves fortunate to acquire some exciting racemare and broodmare prospects, several of which matched ideally with the elite stallions we are invested in,” Ryan explained of the 2016/2017 exchange.

In addition to the mares, SF Bloodstock will offer several weanlings purchased in utero last November. Among the group to go through the sales ring at Keeneland next week are a filly by Tapit–My Conquestadory (hip 105); a Tapit filly out of Mushka (Empire Maker) (hip 289); and a colt by Bernardini out of Disposablepleasure (Giacomo) (hip 228).

“We have a large group of weanlings catalogued this year, including a number out of broodmares purchased last year for our Australian operation,” Ryan said. “We are excited about them as a group.”

After a season of strong results at the yearling and 2-year-old auctions, Ryan expects plenty of competition at the upcoming bloodstock sales, and SF Bloodstock will likely be part of the action.

“We will continue to follow the market along as we have in prior years and are always looking for mares that fit with our breeding program,” he said. “Based on the 2-year-old and yearling sales earlier this year, we expect a robust trading market. The catalogues at both November sales are very strong which should translate into a deep buying bench.”