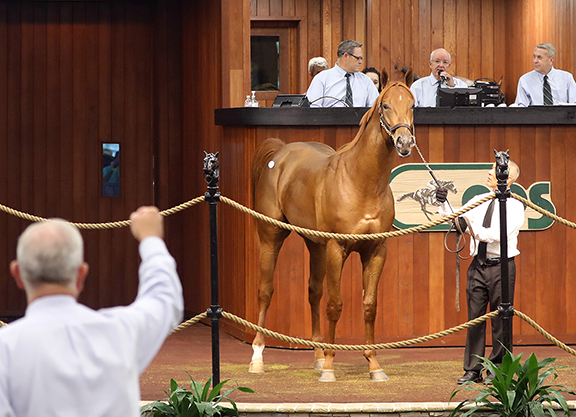 A colt by Speightster (hip 1312), purchased by Larry Best for $1.1 million at the OBS Spring Sale, has been returned to previous owner Solana Beach Sales and has joined the Southern California barn of trainer Bob Baffert.
“Larry Best purchased the colt and after the sale he sent him to Taylor Made,” explained consignor Tom McCrocklin. “I discussed post-sale management of the colt with Frank Taylor because he was not familiar with the horse and I was. And I think they chose to pull his back shoes and put him in a paddock for a post-sale rest. We sold the colt on a Friday and on day seven, at 2 in the afternoon, I got a call that they had put him in a paddock and he was cribbing on a fence board. We made every attempt with Larry Best to resolve the issue. We offered him a discount and at the end of the day, he chose to pass on the horse.”
McCrocklin continued, “We were devastated and disappointed. But the people who own the horse were happy to keep him and we sent him to Bob Baffert.”
Solana Beach Sales is the pinhooking division of the Little Red Feather racing partnerships. McCrocklin purchased the colt on behalf of the partnership for $110,000 at the Fasig-Tipton Saratoga New York-bred Sale last year.
“There were a lot of moving parts of people wanting to stay in and people wanting to get out,” McCrocklin said. “But at the end of the day, they were really excited to have the horse. We feel like we have never had a horse of that caliber and they were happy to keep him.”