Seven-Figure Into Mischief Filly Runs to the Money at Gulfstream 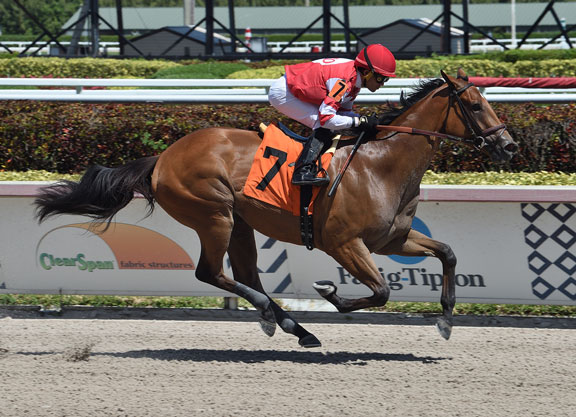 4th-Gulfstream, $43,700, Msw, 3-29, 3yo, f, 6f, 1:10.11, ft.
CENTER AISLE (f, 3, Into Mischief–Specification, by Empire Maker), the third-highest lot when selling to OXO Equine for $1.5 million at Fasig-Tipton Gulfstream last spring, returned to the scene of her :20 3/5 quarter-mile breeze to score a well-bet debut success Sunday in Hallandale. Showing a steady and progressive Palm Meadows worktab for Chad Brown going back to early February, the bay capped off preparations with a half-mile bullet from the gate in :48 1/5 (1/52) Mar. 21. Breaking sharply with all the money on at 3-5, she tussled for the lead in the opening furlong before deferring to sit third behind speedball Senora Roma (Verrazano) through a sharp :21.97 quarter. Appearing to be struggling a bit midway on the turn, Center Aisle came alive when Bill Mott debutante Say Moi (Union Rags) advanced to her outside, and those two inhaled the tiring pacesetter at the top of the lane. Starting to get the better of her rival outside the sixteenth pole, the chalk edged away from there to score by 3 3/4 lengths. Say Moi was clear for the place. “She broke well. There were two horses who really wanted to get the lead. I took a little hold and she did the rest,” jockey Joel Rosario said. “It was a nice performance for her first time out, very impressive.” The winner’s dam is a half-sister to dual GI Pacific Classic winner Skimming (Nureyev) out of five-time graded stakes victress Skimble (Lyphard). A $37,000 Keeneland November purchase by Todd and Shawn Hansen in 2017 when followed into the ring by then-weanling Center Aisle, Specification is responsible for a juvenile Kantharos filly named Skeemin N Dreamin and foaled a Mineshaft colt last term before visiting both Honor Code and Twirling Candy. Sales History: $165,000 Wlg ’17 KEENOV; $450,000 Ylg ’18 KEESEP; $1,500,000 2yo ’19 FTFMAR. Lifetime Record: 1-1-0-0, $25,800. Click for the Equibase.com chart or VIDEO, sponsored by Fasig-Tipton.
O-OXO Equine LLC; B-Breffni Farm (KY); T-Chad C. Brown.