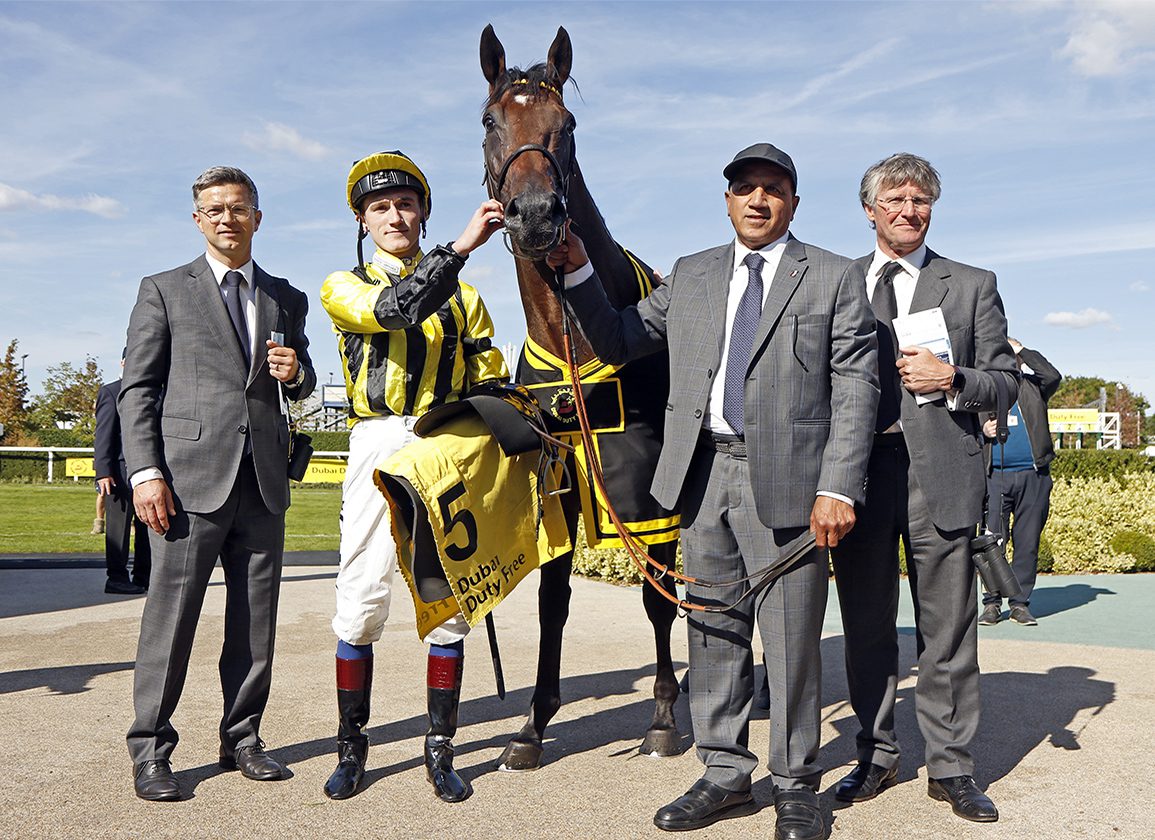 It has been another banner week for the breeze-up sector, not to mention the burgeoning Bahraini participation in European racing.

Sakheer (Ire) (Zoffany {Ire}) was imperious in the Mill Reef, and was the standout in a magnificent seven winners on Saturday for Roger Varian, which also included landing a Group 3 with Mitbaahy (Ire) (Profitable {Ire}) and the Listed Doonside Cup with Royal Champion (Ire) (Shamardal).

Varian had also featured prominently the previous weekend, claiming his second St Leger with Eldar Eldarov, who, like Sakheer, is owned by Bahrain's Shaikh Khalid bin Hamad Al Khalifa, who races under the banner of KHK Racing, a name which only appeared on the British racing scene in 2020. This season KHK Racing has had 12 individual runners from six different stables.

Through trainer Fawzi Nass and bloodstock agent Oliver St Lawrence this is an outfit that has been making quite a splash at the sales in recent years, its purchases including the 2020 Arqana Select Sale topper Pure Dignity (GB), the Dubawi (Ire) half-sister to Sottsass (Fr), who is raced in partnership by Shaikh Khalid and his brother Shaikh Nasser Al Khalifa. She has raced just once, winning well on debut at Newmarket, and is entered on Wednesday at Kempton.

St Lawrence said, “This is only the second crop of three-year-olds for KHK Racing in Britain, so to have a Classic winner and then a very promising two-year-old is very exciting.

“It's also very important for racing, and all the shaikhs that are involved in Bahrain are really enjoying it.”

Bred by Drumlin Bloodstock, Sakheer, who was bought as a foal by Camas Park Stud, was sold at Arqana 18 months later by one of the original breeze-up men, Willie Browne of Mocklershill. St Lawrence signed for him at €550,000 a year after picking up Eldar Eldarov at the same sale for £480,000 from Norman Williamson.

On the forthcoming return of a lovely broodmare prospect, St Lawrence said, “The intention is for Pure Dignity to run on Wednesday and if all goes well, Roger will try to find a black-type race for her later in the season. Then we will put her away, and she will race on next year, all being well.

“I think both Shaikh Nasser and Shaikh Khalid are very keen to try to build up a quality broodmare band which will obviously take a bit of time.”

St Lawrence added, “It has been a dream season and I am lucky enough to be buying these expensive horses, With that comes a lot of weight of trying to produce some good ones, but I think so far we are fulfilling that remit, though this season will be a tough one to follow.”

Those charged with running racing in Bahrain have signalled their intent to increase the domestic racing programme, with the G3 Bahrain International Trophy steadily gaining more traction, and the second Bahrain Turf Series set to kick off just after that in early December. On the back of recent results it is not hard to imagine that we will see increased Bahraini participation in British racing, too.

In Scandinavia, the Lodge Park Stud-bred Hard One To Please (Ire) (Fast Company {Ire}) has been making merry this season. The winner of the Swedish and Norwegian Derbys in July and August, he stepped into Pattern company to land Sunday's G3 Stockholm Cup in the hands of Pat Cosgrave for trainer Annike Bye Hansen.

An £8,000 Goffs Sportsman's yearling-turned-80,000gns breezer, Hard One To Please was bought by Walter Buick at the Tattersalls Guineas Sale. It could be a big week for the family as his half-sister Dandy Alys (Ire) (Dandy Man {Ire}), who was recently runner-up in the G3 Sweet Solera Stakes, is entered for Friday's G2 Rockfel Stakes. Their dam, the nine-year-old New Approach (Ire) mare Alyssum (Ire), has a Camacho (GB) yearling filly in Book 3 of the Tattersalls October Sale.

Move Over Hollie and Tom

Hollie Doyle and Tom Marquand are rightly feted, both individually and as racing's unofficial golden couple, but two other young jockeys, Saffie Osborne and David Egan, who also happen to be a couple, stole the limelight in the last week.

On Thursday, the second Racing League drew to a close in Britain, with a sensational 6,539/1 treble from Saffie Osborne, who duly lifted the £20,000 prize as the leading rider of the series. The 20-year-old jockey's most enjoyable moment of that evening would surely have been her victory on 40/1 shot Raising Sand (GB) for her father Jamie. The 10-year-old son of Oasis Dream (GB) has been a stalwart of the Osborne stable and his eighth win came two years after his last victory.

Osborne's recent run of success has propelled her into the top 50 riders in the country, the only other female on that list along with Doyle, who is second behind William Buick.

For David Egan, 22, it has been an up-and-down year. He lost his retainer with Prince AA Faisal in July, having previously ridden the owner-breeder's Mishriff (Ire) to victory in the $20 million Saudi Cup, G1 Dubai Sheena Classic, and G1 Juddmonte International. Taking the news of that reversal with admirable equanimity, Egan kept his head down, kept riding, and for his boss Roger Varian has been at the heart of a real purple patch for the stable, winning his first Classic on Eldar Eldarov and notching four wins at Newbury on Saturday, including in all three group races, two of which were for Varian and one for Hughie Morrison on Stay Alert (GB) (Fastnet Rock {Aus}).

Angel Shouldn't Be Kept in the Dark

It is hardly a news flash to say that Dark Angel (Ire) is an excellent stallion but Yeomanstown Stud's 17-year-old somehow seems to be a little overlooked. He shouldn't be, for he is currently riding high in the European sires' table in fourth position behind Dubawi (Ire), Frankel (GB), and Sea The Stars (Ire). That leading trio can perhaps be percieved more as 'Classic' sires, but Dark Angel has also been among the Classic winners this season via his daughter Mangoustine (Fr), winner of the Poule d'Essai des Pouliches, in which she narrowly beat the 1,000 Guineas winner Cachet.

The son of Acclamation (GB) was among the major winners on three continents on Saturday. In Canada, Dark Angel's two-year-old son, the Godolphin homebred Mysterious Night (Ire), strolled to victory in the G1 Summer Stakes to become his sire's twelfth Group/Grade 1 winner. This followed Mysterious Night's triumph in last month's G3 Prix Francois Boutin and was one of three graded stakes winners for Charlie Appleby in North America on Saturday, along with Modern Games (Ire) (Dubawi {Ire}) and Nations Pride (Ire) (Teofilo {Ire}).

Another of his juveniles, Barefoot Angel, bred by Guy O'Callaghan, landed the G3 Firth of Clyde Fillies' Stakes at Ayr, while earlier that day in Australia, the six-year-old Top Ranked (Ire), a former Group 3 winner for James Tate in Britain, had claimed his first southern hemisphere stakes win in the G3 Bill Ritchie Handicap for Annabel Neasham and Australian Bloodstock.

Cracksman (GB) is making a pleasing start to his stud career with ten winners already on the board from his 26 runners to date, including the Listed winner Dance In The Grass (GB). It will also be worth following the progress of another son of Frankel (GB) bearing Anthony Oppenheimer's colours who made the most eye-catching start to his racing career last week.

Courage Mon Ami (GB), out of a full-sister to Group 2 winner Bronze Cannon (GB) (Lemon Drop Kid), was well adrift of the main pack in the early stages when making his debut at Kempton on Friday, but that slow start gradually turned into a steaming finish as the three-year-old passed all his rivals with a ground-eating stride that saw him win eased down by five lengths. Certainly one for the notebook.

It would seem that the fairytale of the small breeder Paul Vandeberg still has a few chapters to be written. Vandeberg's lone broodmare Tijuana (Ger) (Toylsome {GB}) is already the dam of Arc winner Torquator Tasso (Ger) (Adlerflug {Ger}), and her three-year-old son Tunnes (Ger) (Guiliani {Ger}) has now added the G3 Deutsches St Leger to his victory last season in the G3 Herzog von Ratibor-Rennen.

The latter had seen him made winter favourite for the Deutsches Derby, but a setback ruled him out of a spring campaign. Trainer Peter Schiergen indicated on Sunday that the colt will now be aimed at the G1 Grosser Preis von Bayern in early November, the race in which his elder brother was second two years ago after winning the G1 Grosser Preis von Berlin. Before that, Tunnes could head to Longchamp for the G2 Prix du Conseil de Paris, a fortnight after Torquator Tasso will attempt to defend his Arc crown.

The Americans are Coming

Lope De Vega's excellent run, which has seen him recently notch his 100th stakes winner, was extended on Sunday across the pond with the victory of Faith In Humanity (Fr) in the G3 Pebbles Stakes at Belmont at the Big A (so named for the races held at Aqueduct while Belmont Park undergoes development work).

Word has it that American buyers will be out in force for the Orby and October Sales, and who can blame them? With a seeming reluctance from American breeders to use turf sires based in the US, and the exchange rate for the dollar against euros and sterling currently extremely favourable, the best place to shop for horses for an expanding turf programme is in Europe.

Farewell to Her Majesty

As this column was being written, the solemnities of the funeral of Queen Elizabeth II had brought much of Britain to a near standstill.

On Sunday in Newmarket during the Henry Cecil Open Weekend, the public gallops which preceded a morning of stable tours were led by two of the Queen's horses, Educator (GB) (Deep Impact {Jpn}) and Saga (GB) (Invincible Spirit {Ire}), ridden respectively by Michael Hills and Rab Havlin wearing the royal silks in tribute.

A number of the Queen's racehorse trainers were observed among the congregation at St George's Chapel in Windsor Castle for the service of committal. For many involved in racing, the last we saw of the Queen in public was at Ascot last October for Champions Day when she presented the trophy for the Queen Elizabeth II Stakes and was herself awarded with a commemorative medal to mark her induction in the British Horseracing Hall of Fame. Her Majesty's fellow inductee Lester Piggott was also at Ascot to be honoured that day. Now, in a mournful time for the sport, both are gone, but neither will ever be forgotten.