Serpentine On Song For French Return 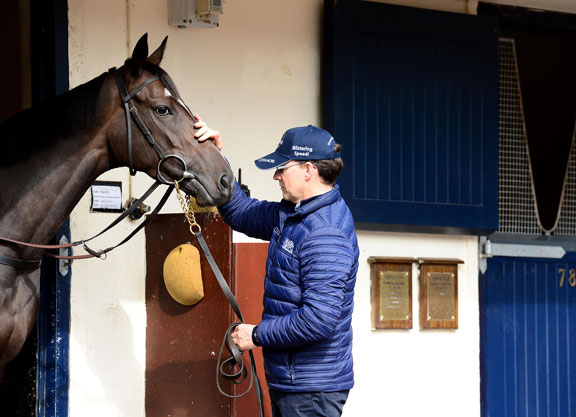 “He had two quick runs leading up to the Derby–he'd only run the week before–and after the Derby he was a little bit quiet and a little bit tired and needed a little bit of time, but we always thought he was a very smart middle-distance horse,” said trainer Aidan O'Brien. “He has a busy next 10 days, so it will be interesting how it goes, but if we run him it will be a run to get him started and back, and then see where we go after that. But obviously a race like the Arc or something like that would be possible. Either way, we are hoping we will have him for next year.”

O'Brien revealed “everything is well” with the aforementioned Love in the wake of her most recent win in the G1 Yorkshire Oaks.

“We had it spaced out that there was a six-week gap from York to France, and that's what we were very happy with,” the trainer said. “We got a chance to give her a couple of easy weeks, and then her programme would start building up again, and she's back into her programme already–she's very fresh. She's doing nice canters at the moment, which she has to do to keep her right, because she gets very well and fresh in herself. Wayne [Lordan] rides her in all her work and he's very happy with her.”

With Serpentine headed to Paris next week and a strong squad anticipated on the home front for Irish Champions Weekend, O'Brien's riding squad will be well spread. The trainer noted he will be utilising some local riders for Doncaster's St Leger meeting on the same weekend, including possibly Frankie Dettori for G1 Irish Derby victor Santiago (Ire) (Authorized {Ire}) in the Leger itself.

“We have spoken to Frankie, and he's going to be there for the Leger, which is great for us, so hopefully he will ride some of ours,” O'Brien said. “We haven't really discussed it, but I'd imagine that [using British-based riders] is what will happen because we'll probably have a lot of runners here and we'll need the lads here. The problem is if the lads go there they can't do anything for the next two weeks after it.

“I'd imagine we'll probably need them at home for that weekend, and we have Frankie and William [Buick], James [Doyle], Adam [Kirby] and Oisin [Murphy]–they've all ridden for us, and we're delighted they've agreed to do that whenever we have needed them. I think we'll be OK that way.”

Magical (Ire) (Galileo {Ire}), meanwhile, is set to be among the headliners of the home team as she attempts to defend her title in the G1 Irish Champion S. She comes off a second to Ghaiyyath (Ire) (Dubawi {Ire}) in the G1 Juddmonte International and could be joined by the likes of Japan (GB) (Galileo {Ire}) at Leopardstown.

“We'd be delighted if [Ghaiyyath] did come over,” O'Brien said. “It was Magical's first run back for an autumn campaign. We'd be looking forward to the race and it would be great for everyone if he did come. She ran in York and Ryan [Moore] was very happy with her and thought she might progress for it. She's a hardy lady and gives her all. There is every chance she'd run a very big race.”