Home » Archive » Shared News » Serengeti Has the Look of Lion

Serengeti Has the Look of Lion 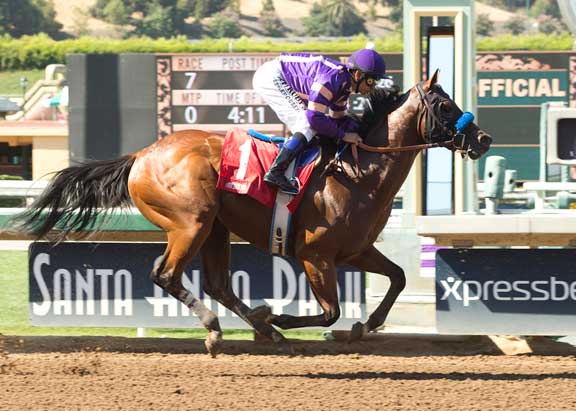 John Fort of Peachtree Stable has been around the game of racing long enough to know that things don’t always go according to plan. But with Hall of Fame trainer Bob Baffert in his corner, nobody would blame the owner for growing accustomed to success as the norm.

Most recently, the duo was forced to regroup after their highly regarded 2-year-old colt Serengeti (Algorithms) crossed the wire a disappointing second as the even-money favorite in his June 10 Santa Anita debut–a performance that was likely a product of studishness in the post parade and greenness on the racetrack, where he struggled with his lead changes and proved no match for Runaway Giant (Ghostzapper) in the stretch.

“We expected him to win the first race, and he just seemed a little confused,” Fort explained. “It just wasn’t him–Bob made the statement one time that [his son] Bode could ride the horse around the barn or in the mornings.”

Equipped with a race under his belt and the services of Hall of Fame jockey Mike Smith, Serengeti more than lived up to that hype in his second start Sunday, reporting home a front-running 11-length winner–a performance that earned him ‘TDN Rising Star’ status [video]. Vastly more professional at second asking, the handsome bay separated from his rivals at will, changed his leads on cue and glided to the wire under minimal encouragement.

“What I really liked was how easily he shook off the other horse, who I think is a pretty nice horse,” Fort said, referring to third-place finisher Honeymoonz Over (Congrats), who applied pressure to Serengeti in the early stages of the races before evening out. “It was just like, ‘Get out of my way. Don’t come here.’ That impressed me more than anything. And Mike sort of just wrapped up on him, almost at the eighth pole, and then by the sixteenth pole, he was just standing up in the saddle.”

A tireless student of the sales game, Fort recalled that he was immediately in awe of the powerful build of the Algorithms colt when he and his wife, Elizabeth, visited the St. George Sales consignment in the days leading up to the 2016 Keeneland September sale.

“I think most people in the business know that I look at a lot of horses–I spend all day, every day looking at horses,” Fort said. “It’s such a pleasure to do business with Archie St. George–he is one of the real gentleman in this business and we’re lucky to have him. This horse walked out of the barn and he was the kind of horse you just knew you were going to buy. He’s just so strong. He’s not a big, massive horse, but he’s just the right size. For a horse his size–which is about 16 hands–he is so strong. The first thing you see about this particular horse is that he just has the most beautiful head. I’ve been sort of bragging on him for the last month or so.”

Fort said he was not actively looking for a second-crop offering from the Claiborne stallion Algorithms (Bernardini), but noticed that Serengeti had a strong hip, reminiscent of his sire. Likewise, a set of pristine x-rays, a straight hind leg and a “Grade I throat” scope added to the colt’s appeal. According to Fort, pedigree was somewhat ancillary in guiding him towards an eventual purchase, but he was well aware of the topside productivity of the mare Ava Knowsthecode–who in addition to Algorithms is also responsible for sires Justin Phillip (First Samurai) and Keyed Entry (Honour and Glory), as well as GISW Greenpointcrusader (Bernardini). Serengeti had plenty of damside appeal to boot as the son of an unraced half-sister to Baffert-trained GSW Fast Bullet (Speightstown) from the family of champion Brave Raj (Rajab).

Although Fort already had his mind set on acquiring the yearling, his commitment was solidified when Baffert and his wife, Jill, entered the fray as co-owners. The Forts are close friends with the Bafferts beyond the confines of the racing world, and were thrilled when the trainer provided his stamp of approval when evaluating Serengeti. Peachtree and Baffert teamed to win the 2011 GI Kentucky Oaks with Plum Pretty (Medaglia d’Oro).

“I told Bob I was going to buy this horse, because l like to make sure that Bob is not going to bid against me,” Fort recalled fondly. “The horse came into the ring, and Bob said, ‘My God, John, you’re going to buy this horse?’ And I said, ‘You betcha.’ And he said, ‘Can I have a piece?’ I told him, ‘Sure Bob, it will be fun.’…Bob came running in [to the sales pavilion] and I told him to get out of there because he was going to run the price up. But anyway, he was so nervous that we weren’t going to get the horse.”

Any concerns were put to rest when the hammer dropped at $200,000, with Fort signing the winning ticket. Serengeti was sent to Central Florida, where he spent roughly six months learning to become a racehorse under the tutelage of Barry Eisaman. While the 2-year-old did not reach the level of physical maturity forecasted by Fort, it was once again Baffert who provided reassurance that they had something special.

“Frankly, I was a little bit disappointed because I expected him to get taller–and he didn’t–he just stayed his strong self,” Fort continued. “He never missed a day of training. Then, when Bob came down [to Ocala] for the [OBS] March Sale, he went out there in the morning, and I said, ‘Bob, I hope you still like him. He’s not a big tall, long-legged horse, but he’s trained really well.’ But when Bob went out there, he thought he was perfect.”

Baffert determined that Serengeti was ready for the racetrack and had him shipped to join his 2-year-old string at Los Alamitos. His stay there was short-lived, however, as he progressed through his training with flying colors and drew rave reviews from Baffert’s assistant, Mike Marlow.

The juvenile showed more of the same at Santa Anita, entering his June 10 debut as a heavy favorite in the minds of the betting public and Fort, himself. Although the colt was forced to settle for second that day, his authoritative victory Saturday has him on track for a stakes debut in the Aug. 12 GII Best Pal S. at Del Mar.

“I was hoping to get out for the races, but we had just bought a place in Montana, so we’re kind of tied up with that,” Fort said. “If we can break free, we’re going to go out to Montana and maybe just fly out to watch him train a few mornings at Del Mar.”

Fort added that he is hopeful that Serengeti can one day successfully navigate a two-turn trip, but sees nothing wrong with campaigning an exceptional sprinter. As he learned with three-time Grade I-winning sprinter and Spendthrift Farm stallion Lord Nelson (Pulpit)–who he scooped up for $340,000 as a Keeneland September yearling–Baffert is at his best when he allows fast horses to strut their stuff.

“You have to have speed,” he concluded. “Serengeti has speed, and I’m so delighted that he does.”