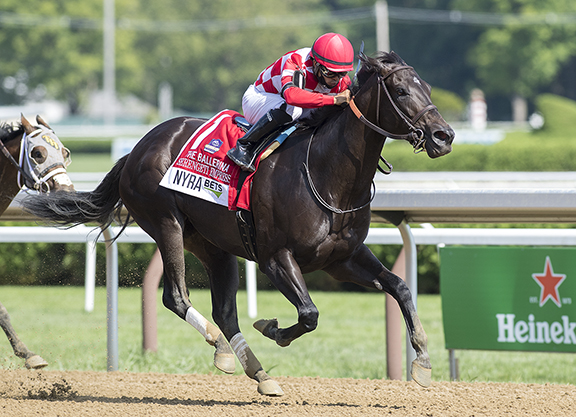 Serengeti Empress (Alternation–Havisham, by Bernardini), second to Gamine (Into Mischief) in the GI Breeders' Cup Filly and Mare Sprint S. Saturday at Keeneland, has been retired and will be bred to Into Mischief, according to a tweet from trainer Tom Amoss's daughter Hayley Amoss Wednesday morning.

“Said goodbye to Serengeti Empress yesterday with plenty of peppermints,” tweeted Amoss, with a photo of herself and the filly taken in front of her stall Tuesday morning. “Sad that she will no longer be in the first stall at Tom Amoss's barn, but thrilled that [owner] Joel Politi is keeping her a short drive away at Taylor Made. On to the next chapter of her legacy!”

Mark Toothaker, the stallion sales manager at Spendthrift Farm, tweeted, “What a filly. So happy Joel Politi and Tom Amoss allowed us the privilege to have her visit Into Mischief.”

A $25,000 KEENOV weanling buy turned $70,000 KEESEP purchase, Serengeti Empress proved to be quite a bargain indeed for Politi and Amoss. Romping by 13 1/2 lengths in the Ellis Park Debutante S. in 2018, the fleet-footed filly ran the field off their feet in that year's GII Pocahontas S., streaking home a 19 1/2-length winner. Off the board in that year's GI Breeders' Cup Juvenile FIllies, she returned to winning ways with a decisive score in last term's GII Rachel Alexandra S., but faded to seventh next out in the GII Fair Grounds Oaks last MArch. Connections discovered that she bled during that effort, but Amoss had confidence she would bounce back fine and trained her up to the GI Kentucky Oaks. Given a 13-1 chance off her Fair Grounds race, Serengeti Empress went straight to the front under Jose Ortiz and proved not for catching, taking home the lilies with a 1 3/4-length score.

Second when cut back in distance for the GI Acorn S. next out, the bay dueled with the equally swift two-time champion Covfefe (Into Mischief) down the length of the Saratoga stretch, finishing a game second in the GI Test S. Off the board in the GI Cotillion S,, she was third in the 2019 GI Breeders' Cup Distaff. Serengeti Empress proved equally game in 2020, dominating the GII Azeri S. in her second start this term. Off the board in the GI Apple Blossom H. and GII Fleur de Lis H., the 4-year-old rebounded with a front-running victory in the GI Ballerina S. Aug. 8 at Saratoga and missed by a nose in the Sept. 5 GI Derby City Distaff prior to her effort in the World Championships. Serengeti Empress retires with a record of 18-7-4-1 and earnings of $2,175,653.