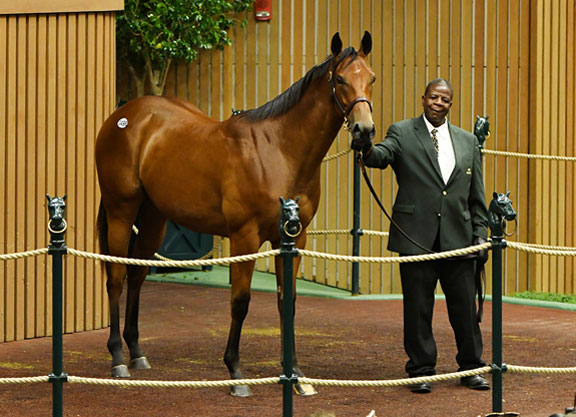 Hats off to you, Mr. Genaro Garcia–and the very best of luck with your filly. For yours is the signature on the last of 2,855 sale dockets processed through 13 sessions of the Keeneland September Sale. A daughter of Haynesfield, out of a War Front mare; fourth dam won the GI Flower Bowl S. back in 1990. And the beauty of this business is that she retains every right, at $1,300, to overcome all the vagaries of fortune that may no less afflict the $8.2 million daughter of American Pharoah and Leslie’s Lady who had the previous week become the most expensive filly ever sold at this auction.

Between the pair, admittedly, the odds of pedigree and conformation will not favor Hip 4642. But the fact is that neither has ever had a saddle on her back, and it now boils down to how destiny chooses to reward the faith and perseverance required for both transactions. For Mandy Pope, in making her only purchase of the fortnight, it was a case of holding out to thwart Sheikh Mohammed himself for the sale-topper. For Mr. Genaro, it was about being literally the last man standing. Ten of the last 11 yearlings in the catalogue had been scratched, but the Haynesfield filly kept her appointment; the hard-working Four Star Sales team secured their 118th sale; and that worn gavel came down one last time.

The commercial abyss dividing these two fillies reflects the unique nature of Keeneland September. It’s not so much a market as the market. The frenzied closing session of Book 1 was off the charts, the $8.2-million filly being one of eight to make seven figures on the day. But while the top end of the bloodstock market has been wild for a while now, on both sides of the Atlantic, it was only when the Amish and others had completed their shopping on Sunday that we could get the full picture.

The three Fasig-Tipton summer yearling sales–July in Lexington, plus the Select and New York auctions in Saratoga–between them cover plenty of ground, and have duly become a pretty good signpost to September. Last year, Fasig’s summer business had anticipated huge KEESEP numbers by tipping $100 million for the first time, up from $75 million just two years previously. Sure enough, Keeneland went through the roof, its $377-million turnover comparing with $308 million in 2017 and $273 million in 2016.

This time around, understandably enough, the Fasig summer subsided 10.6% by gross; and 8% by average. The volume of trade had been very similar (69.9% of 523 hips finding a new home, compared with 70.7% of 538 the previous year) so it looked as though the big spenders at the top end, still rolling in the cash glut of post-recession fiscal policy, might just have begun to go too hard to drag the rest of the market into their slipstream.

All bull runs contain the seeds of their own destruction, of course, and it’s worth noting that the KEESEP median slipped from $50,000 to $45,000. A lot of people sieving this catalogue need to recycle the value they find there, for instance as pinhookers at the 2-year-old sales. And there’s little question that the elite sector of the bloodstock market is pretty faithfully reflecting the way a decade of recovery has principally reinforced great wealth.

But the biggest single impetus to the past two Septembers has not, of course, been a domestic investor. Even in a market like this one, the return of Sheikh Mohammed in person–having for many years previously left his investment here to his representatives–has made an enormous impact. In 2016, his former bloodstock manager John Ferguson gave $2,245,000 for five hips; in 2017, his Godolphin team ranked third on the ledger with $8,065,000 for 17 hips. With the boss back in town, to see the horseflesh and call the bidding, Godolphin has acquired 33 yearlings over the past two Septembers for a total of $35,290,000.

And that’s without an $8-million underbid! It took the Sheikh that long to figure out that Mandy Pope was going to stop at nothing for the half-sister to Into Mischief, Beholder and Mendelssohn. As it was, he had to settle for the sale’s four most expensive colts.

Once again, moreover, his brother Sheikh Hamdan came through as its second-highest investor. This time around, between them, their Godolphin and Shadwell operations gave $27,070,000 for 28 hips. Nobody in this industry should ever, for one thoughtless moment, take for granted the global benefits arising from the Maktoums’ love for the Thoroughbred. Their investment has been unprecedented not only in its scale but also in its commitment.

That the American market also owes much to the broader echelon of the big spenders is evident from the steady increase in the portion of KEESEP turnover claimed by a) seven-figure hips and b) the top ten investors each year.

Leslie’s Lady rather distorts the first group this time around, with 22 sales representing 11.4% of the gross after 27 accounted for 9.7% last year. But both plainly represent a bigger slice of the pie than before.

The top 10 buyers at each sale, similarly, are consistently hitting above the level of four or five years ago. Though they came away with just 130 animals this time, compared with 166 last year, they still accounted for 22% of the gross (similar to 2018, but until recently that share was consistently in the teens).

Their tastes remain predictable, and they reliably left to pinhookers the challenge of finding physicals likely to punch above their sires’ weight. Of the 86 hips to make over $600,000, 75 were by stallions that now stand (or, in a couple of cases, did so previously) at six-figure fees. Exceptional kudos, therefore, goes to Union Rags for producing no fewer than five of the remaining 11 at a 2017 conception fee of $50,000.

He’s had plenty of early action on the track, of course, though some of his peers deserve a lot more patience. If there’s anything as ridiculous as the stampede for unproven new stallions, it’s the impatience the market then shows in demanding proof of their merits. Very often they aren’t even permitted time to get horses on the track before the market runs away screaming.

But I can’t alter the fact that the result is a significant sector within the overall marketplace. In grudging complicity, then, let’s take a look at how the latest group of rookies fared at their first September Sale.

Putting aside as an outlier the first Triple Crown winner since the 1970s, the best average among other new sires last September was the work of Honor Code at $228,095. That mark was comfortably passed by both Nyquist and Runhappy, and essentially matched by Frosted. Runhappy did especially well in processing his stock, 39 of 47 finding a new home, and for a $25,000 cover, hit the ball out of the ground with a $700,000 colt (Hip 551).

From a smaller sample, however, the star turn was Tamarkuz. He housed all eight of his hips, and five of them made six figures. An average of $112,875 stacks up impressively against a $12,500 conception fee, never mind against his revised tag of $10,000. Here’s a horse who beat two future Breeders’ Cup Classic winners in the Dirt Mile, while his half-brother has become a Group 1 winner at Royal Ascot since these yearlings were born. Yet they result from a debut book of just 38 mares.

Others plainly need to look to their laurels, though it’s always worth looking past the bald numbers. Exaggerator, for instance, achieved only an ordinary clearance rate in selling 38 of 63 into the ring. But if you add his RNAs, the average of his “last bids” actually falls pretty close to his $88,658 average, at $84,810. In other words, his unsold stock was not being allowed to go cheaply. Similar testing of Mshawish show that his RNA average, extremely unusually, actually exceeded that of his sales. So while his numbers may look disappointing, he has already had a businesslike fee cut–and it’s good to know that sensible people are prepared to hang onto his stock long enough to let them show what they can do with a saddle on their backs.

Not that the RNA would always be a reliable instrument to avoid “rewarding” sires, when ranked by average sales, for failing to shift their weakest stock. Either way, it’s easy to identify one or two huge talents who are going to pay with their fees. But they retain every right to turn things around once their stock get onto the track.

The trouble is that $360 million, changing hands in 13 sessions, will always mess with people’s heads and skew their priorities. Scrolling down the list of averages, it’s hard to stifle an impotent rage at the idiotic haste with which stallions are discarded. But I guess that gives us all a chance. Right down to a $1,300 Haynesfield filly.