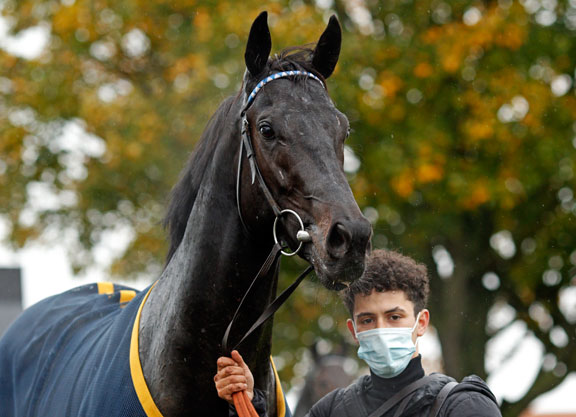 It may have been one of the 3-year-old contests at Newmarket's Craven meeting that did not carry black-type, but Tuesday's bet365 British EBF Conditions S. witnessed a potential class act that could stand alongside any of this week's established Guineas trial winners as Shadwell's regally-bred Mutasaabeq (GB) (Invincible Spirit {Ire}) made all to blitz his rivals and earn TDN Rising Star status. Doing it the other way around when successful over this seven-furlong trip on heavy ground on debut here in October, the son of the G1 1000 Guineas and G1 Coronation S. heroine Ghanaati (Giant's Causeway) was wide awake from the stalls opening this time and on to the rail applying pressure from the front under Jim Crowley. Chased hard by Ballydoyle's race-fit Duke of Mantua (Ire) (No Nay Never) and Godolphin's well-regarded Noble Dynasty (GB) (Dubawi {Ire}) passing halfway, the Charlie Hills trainee simply brushed any threat aside and powered up the hill to win by six lengths from the former, who had performed so well in The Curragh's Madrid H. Mar. 21 which is already looking strong form. There was another two lengths back to the heavily-supported Charlie Appleby-trained Noble Dynasty in third and with the time under a second off the track record there was understandably talk of the main event here on May 1.

“He definitely had an advantage being in front here and got a golden highway there a bit, which might have flattered him but I love the way he galloped out and he's very exciting,” Hills said. “He went right to the top of the hill there after the line. Sheikh Hamdan loved his breeding and Ghanaati is now improving as a broodmare, with Afaak (GB) (Oasis Dream {GB}) a Royal Ascot winner and this fellow lovely and we also have a 2-year-old by Muhaarar (GB) who looks a beauty as well, so it's good to see. Sheikh Hamdan had been a huge supporter of ours, so it's sad that he is not here to witness that. He's got a great team and we'll speak to the management and discuss what's best. He's a gorgeous horse, we left him out of the 2000 Guineas because we were worried he was mentally immature and we didn't want to rush him, but the way he's trained throughout the spring we can probably now have a discussion about that [supplementing]. He could go for a listed race and then Royal Ascot instead. Ghanaati had her quirks, as a lot of the good ones do, so we wanted to keep lid on him and put a hood on before the start but he was very professional and the more racing he gets the better he should get.”

Like Mutasaabeq, the Barry Hills-trained Ghanaati came to Newmarket in the spring of her Classic year with just a maiden win under her belt but with a substantial reputation and duly won the 1000 Guineas on her seasonal bow. Charlie Hills has been graced with all her progeny so far, with the aforementioned Afaak capturing the 2019 Royal Hunt Cup and the year-younger Wafy (Ire) (Dubawi {Ire}) going on to win last year's G3 Mahab Al Shimaal when sold to join Satish Seemar, GSW-UAE, $246,592. Mutasaabeq's full-sister Alandalos (GB) was a handicapper who was tried over 10 furlongs, so there is significant hope that this colt could see out a mile on pedigree and the way he surged past the line here can only add ballast to that view.

Ghanaati's dam, the Listed Virginia H. and Listed Oh So Sharp S. winner Sarayir (Mr. Prospector), also produced Mawatheeq (Danzig) who captured the G3 Cumberland Lodge S. and was second in the G1 Champion S., and the smart Rumoush (Rahy) who took the Listed Feilden S. and was third in the G1 Epsom Oaks. She is in turn responsible for four Shadwell black-type performers including the talented G3 City of York S. winner Talaayeb (GB) (Dansili {GB}) who also carried TDN Rising Star status, while she is also connected to the G2 Queen Mary S. winner and G1 1000 Guineas third Maqaasid (GB) (Green Desert) and this month's impressive All-Weather Mile Championships Conditions S. winner Khuzaam (Kitten's Joy) who is believed to be group 1 material by Roger Varian. In the year of the sad passing of his owner-breeder, Mutasaabeq would be a fitting Classic winner descended from the immeasurable Height of Fashion (Fr) (Bustino {GB}) who provided him with so much glory and fulfilment via Nashwan, Nayef and Unfuwain.