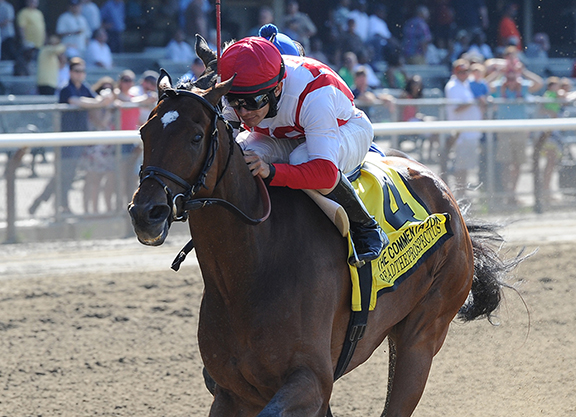 Senator Howard C. Nolan, who grew up in nearby Mechanicville, attended his first horse race with his father at Saratoga in 1946–when the track re-opened following World War II–and caught the racing bug. He was just 14 at the time, so it would be another 30 years before he purchased his first Thoroughbred and eventually developed a large breeding operation in New York. Now, with his 87th birthday approaching, Nolan has decided to wind down his involvement in racing and is offering eight mares at next week’s Fasig-Tipton Winter Mixed Sale as part of a dispersal of his Blue Sky Farm.

“Now I am getting old. I will be 87 in August and I decided to get most of the way out of the horse business, not completely, but most of the way,” said Nolan, who served on the New York State Senate from 1975 to 1994. “I have a wife, I have seven children and a lot of grandchildren, but none of them know a lot about the horse business, so I decided to start getting out of the business.”

A former president of the New York Thoroughbred Breeders, Nolan has been a longtime supporter of the Empire State’s breeding program, even using many New York-based stallions. Some of his top homebreds include MSW Readtheprospectus (Read the Footnotes), who earned over $500,000 in his career; and dual stakes winner Royal Value (Regal Embrace).

Nolan has owned three different farms in upstate New York over the years, but his mares now reside at McMahon of Saratoga Thoroughbreds. He owns a share in McMahon’s top stallion Central Banker, who is the covering sire of four of the mares in the Blue Sky Farm dispersal. Those mares are Marionette Miss (Jump Start) (Hip 122), Meditteraneanpearl (Eskendereya) (Hip 130) and Sandra d’Oro (Medaglia d’Oro) (Hip 247). Surfrider Beach (Bellamy Road) (Hip 304) sells with her newborn Central Banker colt at her side.

Nolan also offers a mare in foal to one of New York’s newer stallions Destin in Pearl Queen (Street Sense) (Hip 190), a half-sister to MGSW & MGISP Friendly Island (Crafty Friend). Two of the mares in the dispersal, Jami Racer (Bellamy Road) (Hip 62) and Tango Rose (Candy Ride {Arg}) (Hip 310), are not in foal.

Flutie (Tapizar) (Hip 523), who sells with her 2020 Paynter filly at her side, has the biggest pedigree in the group. A half-sister to GSW & G1SP Qabala (Scat Daddy), the chestnut’s second dam is MGISW and millionaire Flute (Seattle Slew), who is the dam of GSW & MGISP Filimbi (Mizzen Mast).

“Flutie has a very good pedigree,” Nolan said. “Her dam Flute was a multiple Grade I winner. I sold half of her to a partner. My partner wants to sell. He is new in the business.”

After 45 years in the business, Nolan is at peace with his decision to downsize and more of his stock will be available at auctions throughout the season.

“I will be 87 this summer and I don’t have the same interest I had before,” the attorney said. “I am still going to the track, but not the same way I used to. My plan is to cut down to a handful of horses, breed a little bit, race a little bit and have fun.”

Nolan continued, “I am going to sell some more in the next year and get myself down to about four broodmares or so. I currently have 25. I have one horse in training named Peripherique (Cross Traffic). I just sold two last week in Ocala and I kept one, Theartofcompromise (Normandy Invasion).”