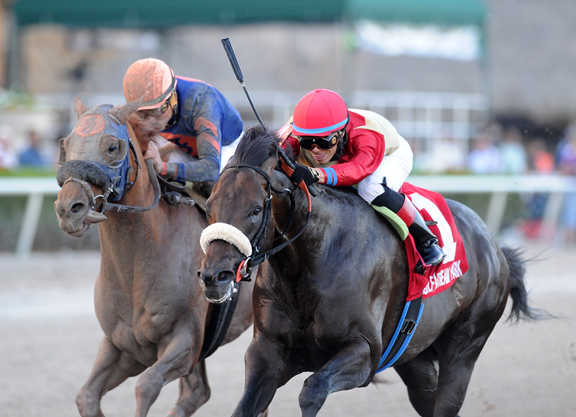 LEXINGTON, KY – Bidding continued to be solid for the prized lots, but the market was increasingly polarized as the second and final Book 3 session concluded Saturday in Lexington. Trainer Bob Baffert and Donato Lanni purchased the day's highest-priced offering, going to $450,000 to acquire a colt from the first crop of Unified on behalf of Mike Pegram, Paul Weitman, and Karl Watson.

“If you have the physical and the vetting and the sire, there is plenty of money here,” said Zach Madden of Buckland Sales. “But if you have one little bit of criteria that you don't meet what the market perceives as being optimal, it's really, really sticky. You have to be realistic on reserves and you can't get too carried away on anything.”

While the auction market has been polarized for several years now, Madden thinks the global pandemic and uncertainty in the economy has widened the gap.

“I think the polarization is definitely accentuated because I just of how cumbersome COVID has made everything–the economy and the whole way people live. Today was a little bit of up and down, but at the end of the day, I still feel like end users are here and I feel like their may be more people in town with the shifts in books. I am still hopeful. We ended up having a pretty good day and my neighbors back at the barn seem to not be dragging their heads too much. Fingers crossed it continues.”

“Everybody is getting more selective,” Greathouse said. “You hear the sellers say the middle market is weak and all the buyers say everything they follow up there to buy is hard to buy. I think the ones you like are maybe a hair more reasonable this year. It seems like we've got some stuff done, it's been difficult, but we've got some stuff done.”

Trainer Bob Baffert and bloodstock agent Donato Lanni continued to pluck the top colts from the back show ring Saturday at Keeneland, going to $450,000 to acquire a colt from the first crop of multiple graded stakes winner Unified (Candy Ride {Arg}) from the Four Star Sales consignment.

“I like what I've seen by Unified,” Lanni said after signing the ticket on hip hip 1769 in the name of Baffert's “Three Amigos” clients, Mike Pegram, Paul Weitman, and Karl Watson. “This colt stood out in Book 3. There is still money here for good horses, so we paid more money than we thought. But everybody is here and the good ones cost money.”

The bay colt is out of Fay Na Na (Majestic Warrior), a half-sister to graded placed The Truth and K G (Successful Appeal). He was bred by John Greathouse's Greathouse Equine and his family's Glencrest Farm.

“Everything about him is special: his demeanor, the way he looks and the way he walks, his mind,” Greathouse said. “He's done everything right since he got here. He showed non-stop and has not slowed down or turned a hair. He's been an absolute champion.”

The Greathouse family's association with Fay Na Na traces back to the 2012 Keeneland September sale, where she was purchased by David Greathouse and his son Deuce for $90,000. The mare never raced and sold for $1,200 at the 2014 Keeneland November sale.

“My uncle and cousin actually bought the mare as a yearling and I bought her privately off a friend a little bit later on,” Greathouse said. “She's been nothing but good to me. She's lived on the farm, my wife and I foaled this colt out. And here we are. This is really special.”

Among those celebrating the outstanding result was the senior John Greathouse, who said he came out to the sale Saturday after his son told him he was expecting big things from the yearling. But, given the uncertain market conditions, the younger Greathouse admitted the colt had exceeded expectations.

“To say I expected that for him would be ridiculous,” he said. “I am thrilled. I am thrilled he's going to good hands and I am grateful to all the people who liked him.”

Fay Na Na produced a colt by Violence this year.

WinStar Farm's Elliott Walden, bidding from the back row of the sales pavilion, went to $410,000 to acquire a colt by Violence for the farm's Maverick Racing division to lead early returns at Saturday's sixth session of the Keeneland September sale.

“He's a beautiful colt,” Walden said after signing the ticket on hip 1694. “He was our favorite horse of the day.”

Violence is having a standout year and added a third 2020 Grade I winner to his resume with recent GI Del Mar Futurity winner Dr. Schivel.

“Wouldn't be buying him last year, but you've got to look at them this year,” Walden said of the stallion.

As the September sale marched into its second week, Walden said, “There are some really good physicals still coming and I'm encouraged with what is in Books 3 and 4.”

Hip 1694, consigned by Hidden Brook, is out of stakes-placed Brinkley (City Zip), a half-sister to graded stakes winner Bound for Nowhere (The Factor). The yearling's third dam produced sprint champion Midnight Lute. He was bred by Douglas Scharbauer, who purchased Brinkley for $170,000 at the 2016 Keeneland November sale.

Dobson Over the Moon

Everett Dobson, whose Candy Meadows Sales sold a $775,000 Quality Road colt earlier in the sale, went to $400,000 to acquire a filly by Malibu Moon (hip 1934) from the Warrendale Sales consignment Saturday at Keeneland.

“Everything,” Dobson said with a laugh when asked what he liked about the yearling. “She is just the type that will ultimately hopefully come home to join the broodmare band and make really nice babies. That's the plan anyway.”

The chestnut filly is out of Rosy Humor (Distorted Humor) and is a full-sister to multiple graded stakes winner Stanford and a half to multiple graded placed Hedge Fund (Super Saver). She was bred by Ron Stolich, who purchased the mare in foal to Orb for $225,000 at the 2017 Keeneland November sale.

Dobson said he is seeing new faces on the grounds as the September sales heads into Book 4.

“There are a fair number of people here today,” he said. “There looks like there is some new money in the house, which is always encouraging in Book 3. You want the new players to come in and it looks like that's the case. Hopefully it will continue for the next week or so.”

More Candy for The Avengers

The partnership of SF/Starlight/Madaket, nicknamed The Avengers by trainer Bob Baffert, added a third colt by Twirling Candy to its haul at Keeneland September when SF's Tom Ryan bid $385,000 to acquire hip 1878 from the Bluegrass Thoroughbred Services consignment Saturday.

“He is a lovely colt,” Ryan said. “He could have been in Book 2. He's a beautiful physical and he's by a very good stallion. We are excited about this horse.”

Ryan added that he was still finding plenty of competition for the top lots as the Keeneland sale reached its one-week mark.

“I thought that was a strong price for that horse, but he's a beautiful colt and we are big fans of Twirling Candy,” he said.

The yearling, bred by Jeffrey Amling and Merriefield Farm, is out of My Own Story. Campaigned by Diane Perkins's Wimborne Farm, she is the dam of graded stakes winner Real Story (Fast Bullet) and stakes winner My Afleet (Afleet Alex).

“We had 11 scopes on the horse, so we knew he was really popular, but you never know what they are going to bring. We didn't think he'd bring that much,” admitted John Stuart of Bluegrass Thoroughbred Services. “You never know until you lead them in there.”