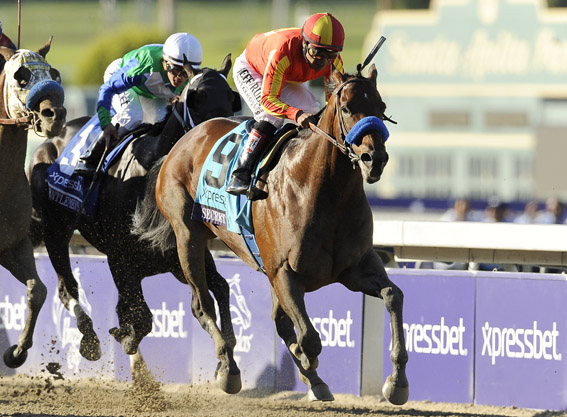 “The owners want to stand out in the marketplace and I believe they will with this outstanding racehorse,” said Sikura.

“We are insistent that Secret Circle be ultra-competitive with all the incentive-laden programs in place for breeders,” Pegram said. “With that in mind, we have set his fee at $5,000 stands and nurses or $7,500 payable out of proceeds. Any breeder that breeds a mare in the first two years will breed for free in his third year at stud. We think that's a lot of horse for the price.”

“Secret Circle was ridiculously fast and could run horses off their feet,” Hall of Fame conditioner Bob Baffert said. “He is a big bodied beautiful horse and a study in great conformation” said Hall of Fame trainer Bob Baffert. “Mike, Carl, and Paul all feel they owe it to Secret Circle to support him in the same way they did Midnight Lute, a two time Breeders Cup winner as well. They look forward to breeding and buying mares that will suit him. You can't breed to a horse with his looks and race record at this price.”

Secret Circle will be available for inspection at Hill 'n' Dale's Open House this Saturday Oct. 17.