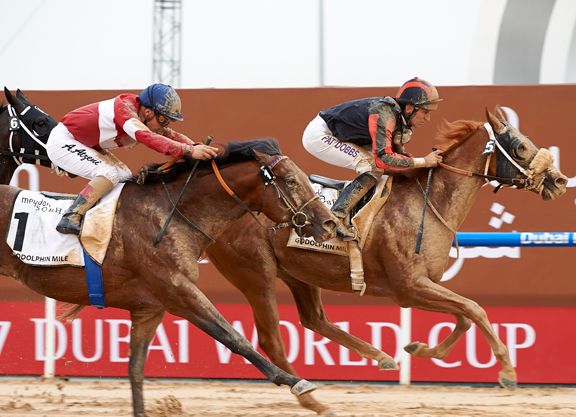 Second Summer (Summer Bird) added the $1-million G2 Godolphin Mile sponsored by Meydan Sobha to his haul in the Dubai World Cup opener Saturday. In the process, the gelding gave his trainer Doug Watson consecutive Mile tallies, after One Man Band (Ire) (Pivotal {GB}) led home a Watson-trained trifecta in 2016. The rallying Ross (Ire) (Acclamation {GB}) was a neck back in second, while in between them was Sharp Azteca (Freud), another 3/4 lengths back in third.

“I didn't quite expect this to happen,” said Watson. “I didn't know if he could act on this ground. We have never had a sealed track over here. He came home nicely.”

At the tail of the field snug against the fence as North America (GB) (Dubawi {Ire}) led with Heavy Metal (GB) (Exceed and Excel {Aus}) to his outside, Second Summer saved every inch of ground through the early going and began to pick off rivals at the half-way mark with a dream run up the inside. Sharp Azteca took over leadership duties shortly thereafter and opened up three lengths on his rivals with 400 metres remaining. Splitting horses in midstretch, Second Summer shifted back to the inside and collared a weary Sharp Azteca a few jumps from the wire, before fending off a late rush from Ross to Sharp Azteca's outside.

“When we turned in he picked up great,” commented jockey Pat Dobbs. “I got a nice clear run up the middle. Just as I was going around the American horse [Sharp Azteca] he shifted out on top of me and he kind of lost his momentum a little but. But I think that helped him a little bit because he just pulls up in front.”

A winner of the GII Californian S. in May while under the care of trainer Peter Eurton, Second Summer weakened to seventh in the GI Gold Cup at Santa Anita S. one month later. He missed by only a nose versus G1 Dubai World Cup entrant Furia Cruzada (Chi) (Newfoundland) in the G2 Al Maktoum Challenge R2 coming off a seven-month plus layoff going 1 3/16 miles Feb. 2 and was a last out seventh in the G1 Al Maktoum Challenge R3 here on Super Saturday Mar. 4.