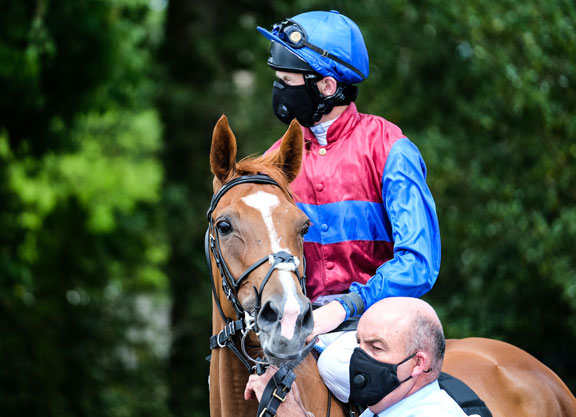 Following two fluent wins over a mile at Kempton and Sandown in August and September with a runner-up finish in the G3 Zetland S. at Newmarket in October, Miss Yoda (Ger) (Sea the Stars {Ire}) looked the clear pick of the trio heading for Friday's Listed Lingfield Oaks Trial which the John Gosden stable won in 2019 with the subsequent Epsom heroine Anapurna (GB) (Frankel {GB}). Missing the break as the fellow Gosden-trained Lake Lucerne (Dubawi {Ire}) was withdrawn having become upset in the stall next door, the even-money favourite was lit up when sent into the main group to gain cover. Having to wait for racing space up the straight, the chestnut was able to work her way to the lead once daylight appeared and from 150 yards out had too much class for the game course winner Golden Lips (Ire) (Golden Horn {GB}). At the line, the Westerberg colour-bearer had 1 1/4 lengths to spare over her, with another daughter of Golden Horn, West End Girl (GB), a nose further behind.

Gosden, who was watching the action on the screen at Newmarket, was content with the winner's performance in light of the stalls incident. “Our other one got upset in the gate and upset her, so she got left and then had to be rushed up. She had a tough time of it, but she showed a lot of courage to win a race at listed level which is great,” he said. “We will see which way the owners want to go, whether they want to look at the [June 16 G2] Ribblesdale [S. at Royal Ascot] or go to the [July 4 G1 Epsom] Oaks. It was quite a hard race for her today as it was a little muddled up at the start, so it wasn't smooth, put it that way. I think from that point of view, we will see how she is for the next 10 days then make our decision. I like the owner to put their input in and then head in the best direction for her.”

The dam, who was successful in the G2 Diana-Trial and G3 Preis der Winterkonigin and was third in the G1 Premio Vittorio di Capua, is a half-sister to Meridiana (Ger) (Lomitas {GB}) who captured the G1 Oaks d'Italia, GII Orchid H. and GIII Bewitch S. The latter's four stakes performers are headed by the GI Man o' War S. runner-up Center Divider (Giant's Causeway) and the dual stakes winner Chamois (Smart Strike) who was also third in the GII Dixie S. Monami has the 2-year-old colt Mahanadi (GB) (Amaron {GB}) and a yearling colt by Kingman (GB) who was purchased for 340,000gns by Baroda Stud as one of the momre expensive lots at the recent Tattersalls December Foal Sale.