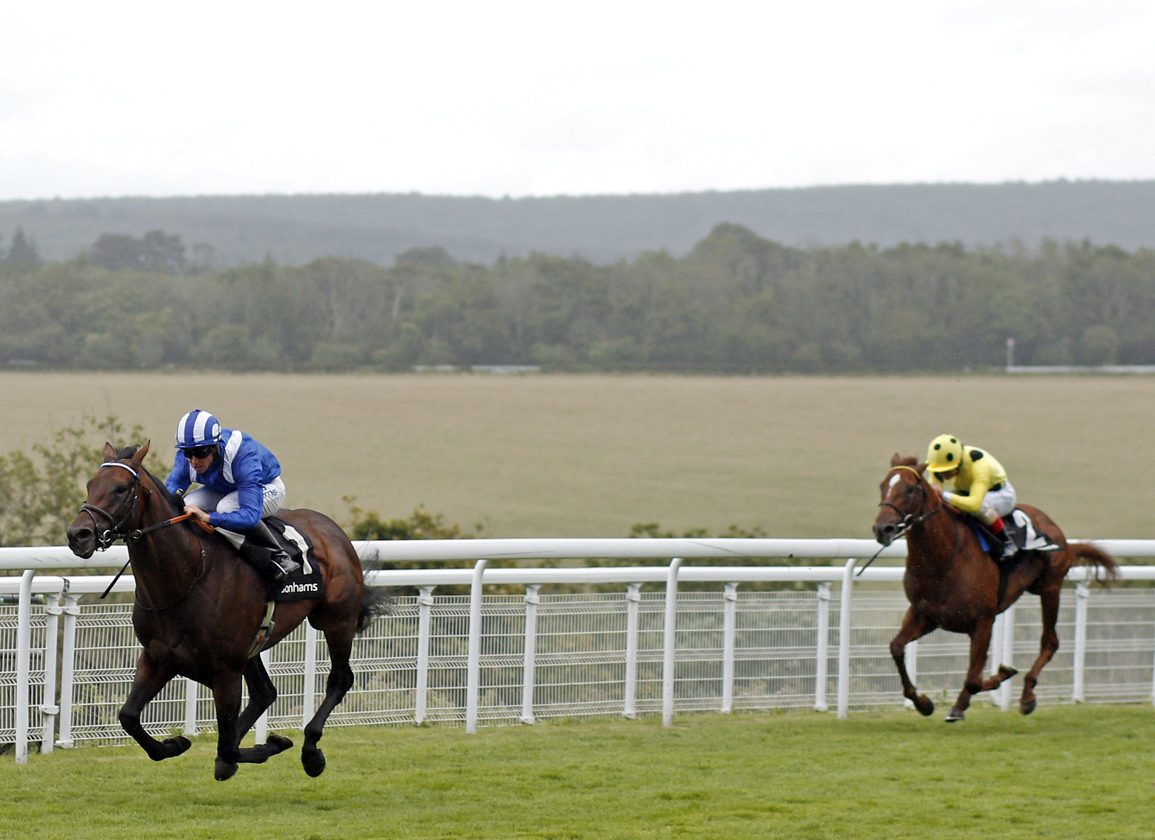 Shadwell's homebred 3-year-old colt Baaeed (GB) (Sea the Stars {Ire}) announced his arrival on the scene going three-for-three with a four-length rout in Newmarket's Listed Sir Henry Cecil S. earlier this month and continued a rapid rise through the ranks with an explosive performance in Friday's G3 Bonhams Thoroughbred S. at Goodwood. He had earlier snagged a June 7 one-mile maiden on debut at Leicester, following up under a six-pound penalty in a June 19 novice heat at Newmarket, and went postward with overwhelming crowd confidence for this fourth outing at the one-mile trip. Baaeed employed patient tactics from flagfall and settled off the pace, racing sixth of the seven runners, through halfway. Making eyecatching headway under a motionless Jim Crowley in the straight, the 2-5 favourite loomed large hard on the steel approaching the furlong marker and lengthened clear in impressive fashion to easily outclass G1 Coral-Eclipse fourth El Drama (Ire) (Lope de Vega {Ire}) by a widening 6 1/2 lengths. Royal Ascot's G2 King Edward VII S. runner-up Tasman Bay (Fr) (Le Havre {Ire}) bolstered the form and finished a half length back in third.

“People keep saying he is running good times, but he's just a good horse and keeps doing it,” said trainer William Haggas. “He's sound, healthy and fast. I learnt today that he doesn't need fast ground to be at his best and it confirmed that he is a good horse. Baaeed is a full-brother to Hukum, who stays 14 furlongs, and looking at him, he looks like he is faster than his pedigree suggests. We will stay at a mile for now. He started life on June 7 and it is now July 30. He has had four races and been running in decent company against 3-year-olds. He's in the races that he should be and it is time he took on the better ones in the bigger races. He is entered in the [G1 Prix] Jacques Le Marois, the [G2] Celebration Mile back here and the [G1 Prix du] Moulin. I'm not for running them regularly, but horses are bred to race and I am very happy to run him in a top-class race next time.”

Shadwell's racing manager Angus Gold added, “It looked like he got there very quickly when Jim [Crowley] asked him. He has a fantastic attitude and you've got to think he is a Group 1 horse. Until he proves us wrong, or gets caught out over a mile, there's no point in going up to 10 furlongs. He is very much a 12-furlong horse on pedigree, but you just have to stand behind him and look at his quarters to see where his speed comes from. We are lucky to have him and too much speed is a nice problem to have.”

Reflecting on the performance, rider Jim Crowley commented, “Baaeed has an engine on him and I was quite happy to sit where I was. We had a low draw, but I didn't want to go up the inside and complicate it, especially here at Goodwood. He got into a nice rhythm and, when I pulled him out, I knew I had plenty of horse. We had a few concerns about the good-to-soft ground as he has not gone on it before, but as you could see it was no problem. He is a proper horse and you would like to think that he is a Group 1 horse, but he's got to go and do it. I don't see any reason to step him up in trip at the moment and, from a stallion's point of view, you'd love him to win Groups 1 races over a mile. I am sure, at some stage, he will go up in trip.”

Roger Varian was not downcast in defeat and accepted runner-up El Drama had met with something special. “In trying to stretch the winner, he just tired in the final 100 yards, but we are pleased he held on for second,” the Newmarket trainer said. “We were blown away by the winner, but he ran a nice race. El Drama is a very likeable horse and just shy of the top grade at the moment. I think he will improve with age and will be a nice horse to have in the stable over the next year or two. He is at this level while the winner looked a Group 1 horse.”

Baaeed is the fifth of seven foals and one of three scorers out of Listed Prix de Liancourt victrix Aghareed (Kingmambo), herself a daughter of MGISW US champion Lahudood (GB) (Singspiel {Ire}). Lahudood, in turn, is a granddaughter of Listed Cheshire Oaks runner-up Bashayer (Mr. Prospector), herself one of seven black-type performers out of MGSW blue hen Height of Fashion (Fr) (Bustino {GB}). Baaeed is a full-brother to last term's G3 Geoffrey Freer S. and this month's G3 Silver Cup winner Hukum (Ire). The April-foaled homebred bay is also a half-brother to the hitherto unraced 2-year-old filly Zaghaareed (GB) (Intello {Ger}) and a yearling colt by Nathaniel (Ire).