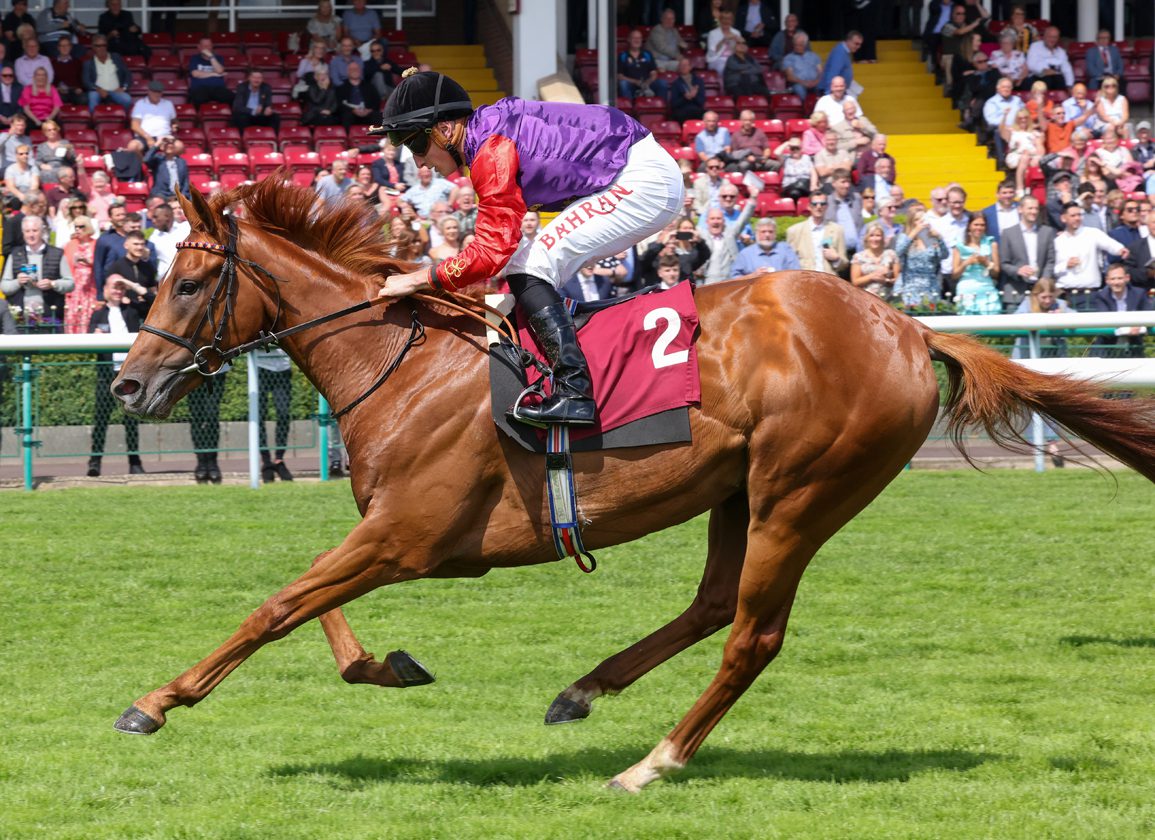 The Queen's 2023 G1 Derby entry Desert Hero (GB) (Sea The Stars (Ire)–Desert Breeze {GB}, by Dubawi {Ire}) brushed aside early aggravation in Thursday's Tuffx Glass EBF Novice S. at Haydock and closed out the seven-furlong contest with panache to earn 'TDN Rising Stardom' for the relentless William Haggas stable. The 4-1 third choice engaged in light scrimmaging at the break and was detached from the leaders in seventh until easing closer in the straight. Shaken up when moving into contention approaching the quarter-mile marker, he quickened smartly to gain control with 150 yards remaining and lengthened clear in style to easily account for Captain Winters (GB) (Lope de Vega {Ire}) by an impressive 2 3/4 lengths.

“That was really impressive,” beamed rider Tom Marquand. “He was learning on the way down [to post] and learning on the way round. The penny really dropped two [furlongs] out when he had the top two in the betting to go and chase down. He actually surprised me how quickly and well he did it. He'll definitely stay further, without a doubt. Going another furlong is going to help him travel better and everything will fall a little easier for him early on. He's learning and that speed will come with racing and experience. There's plenty to work with for the future.”

It has not been plain sailing back at base for the winner. “He was good, but he has not been that straightforward at home,” explained Maureen Haggas. “He was lovely in the winter and then just went off the rails a bit. Andrew Tinkler has been riding him and he's got him back on track. In the last two weeks he has really got it together, but I didn't expect him to do that. I thought wherever he finished he'd run a really nice race, because he was relaxed and moved well and it was just nice to watch. He looked a bit surprised afterwards so I don't know where we'll go next because you wouldn't want to throw him into the deep end too soon. Everyone wants Her Majesty to win The Derby, so I think you'll get people looking at anything that is by Sea The Stars and thinking 'he'll stay, give him a Derby quote!'”

Desert Hero (Sea The Stars) makes a big impression on debut for Her Majesty The Queen, William Haggas and @TomMarquand at @haydockraces pic.twitter.com/d3dWV0V620