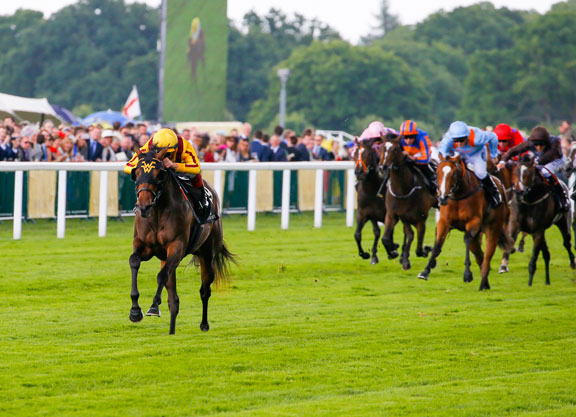 Having earned ‘TDN Rising Star’ status when breaking apart a Keeneland maiden special weight and setting a new track record in April, Lady Aurelia (Scat Daddy) justified 2-1 favouritism by posting a scintillating performance in Wednesday’s G2 Queen Mary S. at Royal Ascot. The bay lunged from the gate and was in instant control, stealing lengths on the field within one furlong. Holding sway on the bridle throughout, she had all her rivals on the stretch when shaken up approaching the final eighth and went through the gears in the closing stages to hit the wire a scarcely unbelievable seven lengths clear of Al Johrah (GB) (Bated Breath {GB}), with Clem Fandango (Fr) (Elzaam {Aus}) a further 2 1/2 lengths adrift in third.

“It was breathtaking from on top and to win a sprint by seven lengths at Royal Ascot is, well, I’ve never seen anything like it,” admitted a lost-for-words Frankie Dettori. “I knew we were doing very good splits and when I asked her with 1 1/2 furlongs to go she found another gear and I was completely shocked. She is a lovely filly and [trainer] Wesley [Ward] is a master at what he does.”

Ward, who was registering a third Queen Mary success following previous scores by Jealous Again (Trippi) in 2009 and Acapulco (Scat Daddy) last year, has set the bar for his Stateside counterparts and extended his Royal Ascot tally to seven. The trainer confirmed Lady Aurelia will stay remain in Europe in the short term and revealed immediate targets, saying, “She’s an amazing filly and she’ll have a big future. I’ve got the [July 27 G3] Molecomb [S. at Goodwood] or the [Aug. 21 G1 Prix] Morny [at Deauville] in my mind, but I’ll talk to the owners and see if they agree.”

Harry Herbert, racing adviser to Al Shaqab Racing, was gobsmacked by the winning performance, commenting, “I can’t believe what I’ve just seen, it was a remarkable performance. Al Johrah has run an absolute blinder, but has come across the best 2-year-old filly performance I’ve ever seen in my life. We’re delighted with Al Johrah, who has seen off the rest, but we don’t see performances like the winner’s very often. [Jockey] Gregory Benoist said he couldn’t believe what was happening in front. He knew he had the rest beat, but there was the filly from the other side of the pond. She’ll get further and we’ll see where the winner goes as we will avoid her at all costs.”

Scottish trainer Keith Dalgleish was understandably ecstatic at the display of third-placed Clem Fandango, and said, “She’s run her heart out and I’m delighted with her. She’s run straight and true, she handled the ground and the winner looked very special. She’s in the Super Sprint at Newbury off 112 pounds and, with that kind of money if she’s right at the time, we’ll probably go there, but I’ll speak to [owners] Middleham Park and see what they would like to do.”