Scat Daddy's Caravaggio Bounces Back In the Flying Five 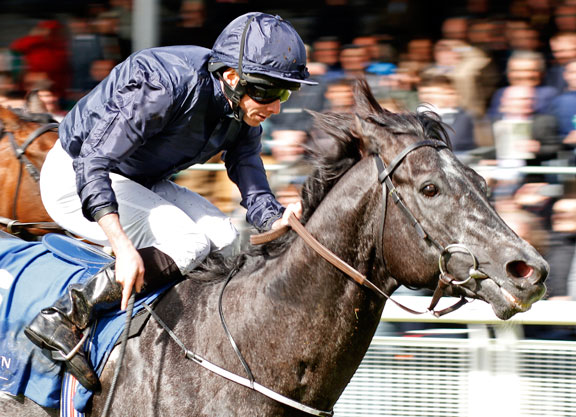 The ground was slow as he came into this potentially tricky contest off two defeats with a question mark above his head, but Caravaggio showed he has character as well as athletic ability to re-establish his winning connection. Confidently-backed into odds-on by those in the know, the grey was much calmer in the gates and more alert from them than he had been on his last three starts including when blowing the start in the G1 Prix Maurice de Gheest and that was half the battle in this speed test. Still needing pushing along by Ryan Moore in midpack after halfway, he kept responding in the slow-building way that had seen him usurp Harry Angel (Ire) (Dark Angel {Ire}) at Royal Ascot as his stablemate Alphabet set the right fractions up front. That 50-1 surprise package, who had finished third in the G3 Ballyogan S. on similar ground but who was last of nine in the Listed Abergwaun S. 10 days earlier, kept him honest all the way and it was only in the final 50 yards that Caravaggio emerged on top to end a rare barren spell for his rider.

Caravaggio can hardly be seen as a disappointment, having conquered two Royal Ascot contests and the G1 Phoenix S. here on contrasting ground conditions, but he did lose his veneer of intangibility in the G1 July Cup and suffered a greater loss of morale when sixth in his well-documented special shoes in the Maurice de Gheest at Deauville Aug. 6. Aidan O'Brien was relieved after he had led home an unexpected stable one-two in a renewal dominated by the 3-year-olds. “We wanted to come back here and get the confidence back. He did everything perfect and Ryan gave him a lovely ride,” he said. “The lads had him lovely and settled at home in the stalls and were very happy with him. We're delighted to have him back.”

The master of Ballydoyle is keeping the faith as Caravaggio's options are explored. “We think he's a great horse,” he continued. “He's relaxed, he quickens, he travels. He has a big engine and for a sprinter he's 100 per-cent clean-winded. He's very easy to get fit and he's a great mover. He has a big heart and lungs, I'd say. We put the wrong shoes on him the last day and he had no traction in Deauville. He just kept swapping and changing and he just never got into any kind of a gear. It was like driving a car with the clutch slipping. We were a little bit worried as he came back very sore after the last time, but it was a very good performance in heavy ground and he behaved great. He has all the options. He obviously has the sprint in Ascot [the Oct. 21 G1 Qipco British Champions Sprint] and also America. We were talking about Australia earlier in the year, but it might be too much as we had to do a little bit with him over the last two weeks to get him here and get everything working. We'll see, but the lads will decide that themselves.”

Along with the GII Gallant Bloom H. winner My Jen, Caravaggio is one of two group or graded-stakes winners out of the stakes winner Mekko Hokte (Holy Bull). The third dam Silver In Flight was also successful in a stakes race and was placed three times in graded-stakes company, most notably when runner-up in the GII Black Helen H. She is also the second dam of the GIII Lexington S. and GIII Lawrence Realization H. winner Sharp Performance (Kris S) who was also third in the GI Secretariat S. Silver In Flight is a half-sister to the First Lady H. winner Stark Winter (Graustark), who in turn produced three stakes scorers headed by the four-times grade I-winning sire Bien Bien. Mekko Hokte's yearling is a full-sister to Caravaggio and her colt foal is by American Pharoah.