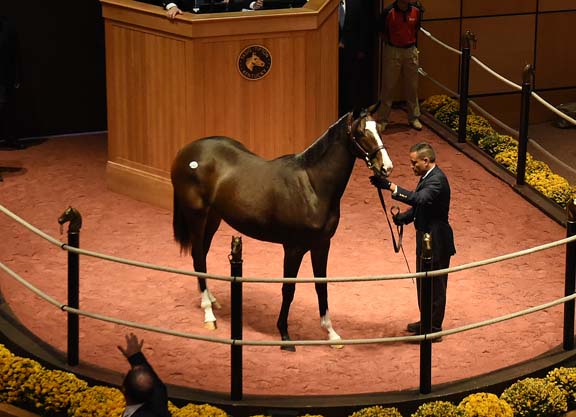 The Fasig-Tipton October Fall Yearling Sale kicked off its four-day run at Newtown Paddocks in Lexington on Monday. In all, 204 offerings fetched at total of $6,694,300, but due to a change in format, direct comparisons to its 2014 are difficult.

“We don't have comparable stats, considering we have four days this year compared to three days last year,” said Fasig-Tipton President Boyd Browning , Jr. “I thought it was a pretty reasonable and fair marketplace. The buyers were saying it was really tough to buy what they wanted, and the sellers were saying it wasn't easy to sell your horses.”

“I've always had a lot of luck out at this sale,” said trainer Mark Casse, who purchased four yearlings on behalf of Conquest Monday for a total of $570,000. “This is one of my favorite sales. I can remember when you could buy one for $20,000. Now, the quality has really increased here. People know if they have a little issue, and they need to give them some time, it's not a big deal because you can get big money here.”

A total of 1485 horses were catalogued for this year's sale, which runs through Thursday.

“We saw some spirited competition and bidding on the higher end lots, so that is always nice to see,” said Browning. “It is strictly an alphabetical catalogue, so you don't ever know where your better horses are going to fall.

The October sale continues through Thursday, with sessions beginning daily at 10 a.m.

Bidding was fast and intense for the bay Scat Daddy filly that topped the first session of the Fasig-Tipton October Fall Yearling Sale at $340,000. Bloodstock agent Mike Ryan signed for the session topper on behalf of an undisclosed client who is new to the racing industry.

“He is an under-the-radar guy,” Ryan said of his client. “He's just getting in the game. I said, 'You are better off buying some fillies and let's do it slowly. Stick with quality and not quantity and try to develop a program over five years.' ”

The filly is out of the Unbridled's Song mare Halo's Verse and hails from the family of champion racemare Ashado. Halo's Verse has had two foals to race, including Fundamental (Arch), who finished second in last month's GII Commonwealth Derby.

Ryan's client will retain his new purchase and will likely race her on the East Coast.

“She was a special filly,” said Ryan. “She had the back class and the pedigree, and what can you say about the sire? He is unbelievable at the moment. She is a standout. You are trying to buy runners and then retire them as quality broodmare stock.”

Anderson Farms consigned the session topper, who was the seventh-highest priced filly in the sale's history. The operation purchased Halo's Verse with her Scat Daddy foal in utero at the 2013 Keeneland November Breeding Stock Sale for $155,000.

“I got lucky,” said David Anderson on buying the future session-topper in utero. “She was a big, immature horse when she was younger. We felt she needed that extra month, so we decided to come to this sale and try to be a big fish in a small pond. She was as good a Canadian-bred filly as I think I've seen in a few years. We are just really proud to raise horses like that.”

Halo's Verse did not have a foal this year, but is in foal to Elusive Quality. Anderson said she will likely be bred back to Arch or Scat Daddy in 2016.