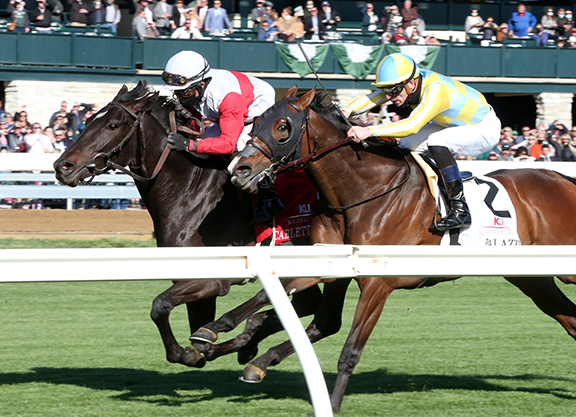 Stuart Janney III's Scarlett Sky (Sky Mesa) looked to have it all to do in Friday's GIII Kentucky Utilities Transylvania S. at Keeneland, as he lingered in last of six behind a glacial pace. But, steered out widest into the stretch, he motored down the center of the course beneath Joel Rosario and was along late to post an ultimately cozy victory. Palazzi (Pioneerof the Nile) hit the lead inside the final sixteenth, only to be run over in the final strides, while GI Breeders' Cup Juvenile Turf hero Fire At Will (Declaration of War) enjoyed a very soft time of things on the engine, but could not take advantage of the slow pace he set and could do no better than third.

Wrestled back into a trailing position after breaking on terms, Scarlett Sky was content to sit at the back of the pack as Fire At Will dictated opening splits of :24.63 and :49.83 in advance of California raider Earls Rock (Ire) (Fascinating Rock {Ire}). Snugly held as they entered the final three-eighths of a mile, Scarlett Sky was shaken up from last and steered out to the center of the course at the quarter-pole, but still had a half-dozen lengths to find. Fire At Will had a kick, but began to shorten stride with time ticking away and Scarlett Sky finished fastest of all for the victory. It was the second win in the race for Janney and trainer Shug McGaughey, who teamed to win the 2011 renewal with Janney homebred Air Support (Smart Strike).

“I knew they weren't going very fast,” said Rosario. “In the first turn, I wasn't far away from [the leaders]. I just let him get his feet into the ground, and he came with a strong run like he always does. He put in a good finish.”

A maiden winner at third asking at Belmont last October, Scarlett Sky was a low-odds and well-beaten fourth in the Nov. 28 Central Park S. at Aqueduct. With Lasix on for the first time, the homebred romped by five in a Jan. 14 Gulfstream allowance and was most recently narrowly beaten into second by 'TDN Rising Star' Annex (Constitution) in the Feb. 27 Palm Beach S. in Hallandale Beach. He was racing Lasix-free Friday.

Scarlett Sky becomes the 72nd stakes winner and 26th winner at the graded level for Three Chimneys' reliable Sky Mesa. His dam is a half-sister to these connections' My Impression (Sky Mesa), impressive winner of the 2016 GIII Commonwealth Oaks, and the deeper female family includes Claiborne stallion First Samurai (Giant's Causeway). Barren to Janney and Phipps Stable's GI Kentucky Derby winner Orb (ridden by Rosario) for 2019, Mata Mua is the dam of a yearling filly by Janney's Ironicus and a filly foal by Runhappy.