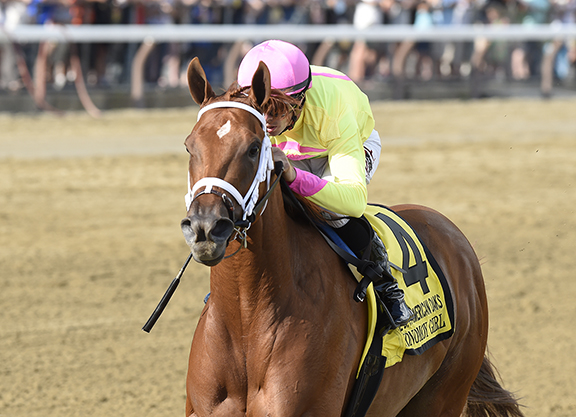 Mr. Monomoy (Palace Malice), a half-brother to last year's champion 3-year-old filly Monomoy Girl (Tapizar), makes his second career trip to the post at Churchill Downs Saturday. The $60,000 KEENOV weanling and €180,000 ARQMAY juvenile ran a better-than-it-looked fourth on debut as the 5-2 favorite after getting squeezed badly at the break at Keeneland Oct. 19. Mr. Monomoy fired a four-furlong bullet in :47 (1/89) beneath the Twin Spires Nov. 2. He is owned in partnership by Madaket Stables LLC, Michael Dubb and Doheny Racing Stable and is trained by Brad Cox.

“We've had him a few months but he keeps getting bigger and stronger,” Cox said. “He was bought as a weanling and somehow ended up in France and Sol Kumin purchased him. Sol called me and said he just purchased Monomoy Girl's brother out of a sale in France. I said, 'Man, you don't miss much, do you?' He came to us somewhat of an immature horse but has really picked up.” TJCIS PPs