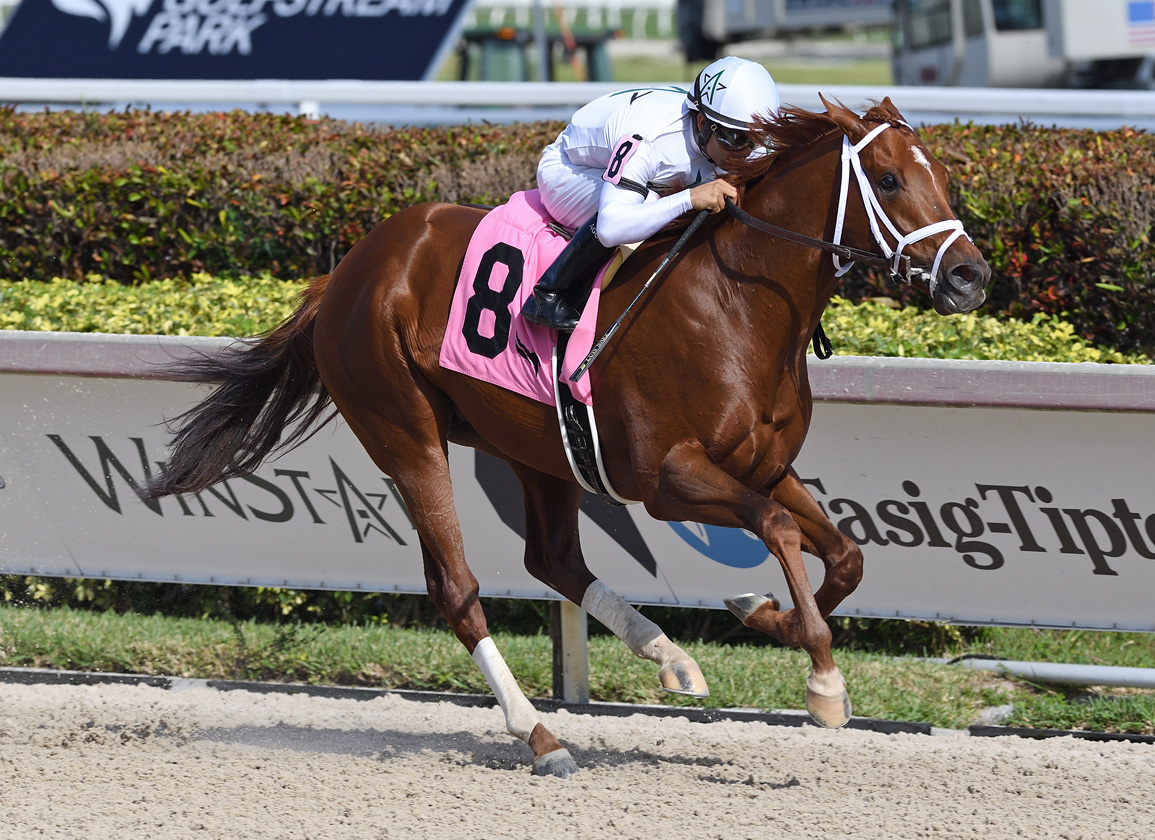 4th-GP, $60k, Msw, 3yo, 6f, 1:27 p.m. ET
Several in this race carry nice price tags but IRON WORKS (Distorted Humor) on the outside catches the eye first as a $550,000 purchase from last year's OBS April sale (:10 1/5) for MyRacehorse and Spendthrift Farm. The runner is a half to one other winner from GISP Silverpocketsfull (Indian Charlie), herself out of MGSP Unforgotten (Northern Afleet) and a half to another graded stakes-placed horse. Particular (Classic Empire) one down in the gate is part of the first 3-year-old crop for his sire, and is a $300,000 2021 Fasig-Tipton Gulfstream graduate after breezing in :10 2/5. Awesome Aaron (Practical Joke), out of a stakes-winning half to a group stakes placed runner in Japan, hails from the same sale; having drilled an eighth in :10 1/5 before going to Bradley Thoroughbreds acting as agent for William H. Lawrence for $350,000. The half to Grade I winner Denman's Call (Northern Afleet) by the late Arrogate, $200,000 KEESEP and $100,000 OBS June graduate Anthracite, will break from midpack. TJCIS PPs

5th-GP, $61k, OC 75k/N1X, 3yo, 6f, 1:57 p.m. ET
After an eye-catching debut victory Dec. 11 at Gulfstream Park, WinStar Farm and Siena Farm's DEAN'S LIST (Speightstown) will make his 3-year-old debut against a closely matched allowance field. A winner by five lengths after contesting a speed duel through fractions of :21.70 and :44.36 half, he earned an 83 Beyer for the effort. The colt is out of Mildly Offensive (Sharp Humor), a dual stakes-winning half-sister to MGSW It's No Joke (Distorted Humor) and SW Keep Laughing (Distorted Humor). Dean's List adds Lasix here for Todd Pletcher. TJCIS PPs

7th-GP, $60k, Msw, 3yo, 1m, 3:05 p.m. ET
Whisper Hill Farm homebred CHARGE IT (Tapit) will be representing the family of 2013 Broodmare of the Year, Take Charge Lady (Dehere) through his dam, I'll Take Charge (Indian Charlie). The second foal for the young broodmare, a $2.2 million purchase by Whisper Hill from the 2013 Keeneland September sale, he becomes her first to the races. His second dam needs little introduction, her line producing three sires as well as recent graded and listed stakes winners As Time Goes By (American Pharoah) and Courvoisier (Tapit). Next to that one in the gate is Touch Code (Honor Code), a half to champion 3-year-old West Coast (Flatter), whose first 2-year-olds will arrive this year. Their dam, champion 2-year-old and GI Breeders' Cup Juvenile Fillies victress Caressing, is also the second dam of three millionaires in Japan. He was a distant second behind 'TDN Rising Star' Emmanuel (More Than Ready) on debut in Hallandale Dec. 11. The field of 10 also includes Trending (Uncle Mo), a half-brother to $1.2 million 2017 Keeneland September yearling Almashriq (War Front). Out of GSW & GISP Theyskens' Theory (Bernardini), the early May colt claims Stevie Wonderboy (Stephen Got Even) and Somelikeithotbrown (Big Brown) down the page and will debut for Shug McGaughey as a homebred for Andrew Rosen. TJCIS PPs