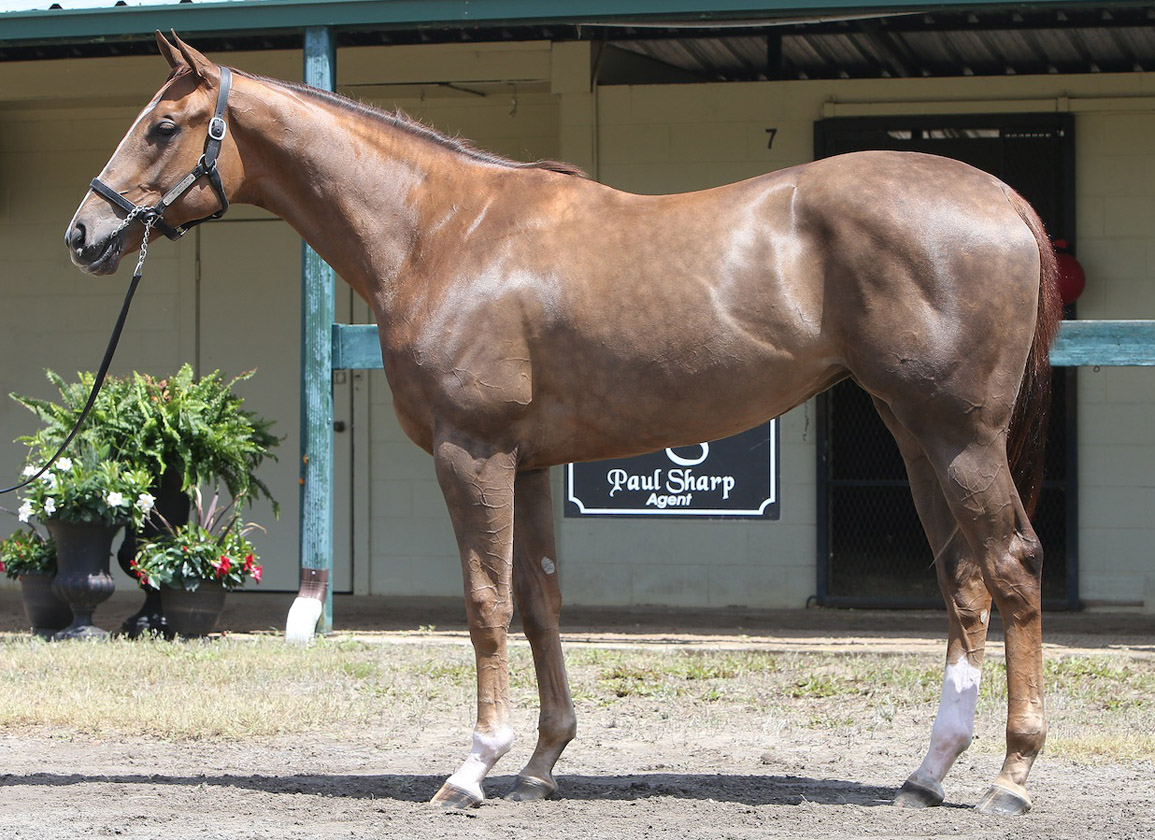 Dance to the Music at OBS | ThoroStride

7th-DMR, $70K, Msw, 2yo, f, 5 1/2f, post time: 8:06 p.m. ET
DANCE TO THE MUSIC (Maclean's Music) was a work in progress when Walnut Stream Enterprises, a partnership led by 2-year-old consignor Paul Sharp, snapped her up for a mere $40,000 at Keeneland September last fall. Seven months later, the long-striding chestnut was hammered down to Red Baron's Barn and Rancho Temescal for $575,000 at OBS this past April after breezing in a bullet :10 flat. “We were looking for horses with nice physicals and she developed very well,” Sharp told the TDN's Christie DeBernardis. “Every month she got better and she peaked at the right time.” The April foal is out of an unraced Congrats half-sister to GSW turfer Makeup Artist (Dynaformer). Mirasol (Arrogate) is the latest produce from MGSW & GISP Justwhistledixie (Dixie Union), whose other offspring include MGSW and freshman sire Mohaymen (Tapit), GISW New Year's Day (Street Cry {Ire}), GSW & GISP Enforceable (Tapit) and GSW Kingly (Tapit). The Cleary family also bred the ill-fated MGISW Arrogate. LNF Foxwoods' Honor It (Tapit) is the second foal out of With Honors (War Front), winner of the Juvenile Fillies Turf over the local grass in 2016 and subsequently Grade I-placed on dirt in the GI Chandelier S. The filly's champion third dam Dreaming of Anna (Rahy) is responsible for LNJ Foxwoods' Grade III-winning turf sprinter Dreamologist (Tapit) as well as the late GISP Fast Anna (Medaglia d'Oro) and SP Big Dreaming (Declaration of War). TJCIS PPs

6th-SAR, $100K, Msw, 2yo, 6f, post time: 3:55 p.m. ET
IRISH SEA (Honor Code) gets gate nine in a field of 10 for his debut. By an eye-popping first-out winner at Saratoga, earning the 'TDN Rising Star' distinction in the process, the dark bay is the second foal out of debut romper Irish Jasper (First Defense), who won the GIII Miss Preakness S. and GIII Victory Ride S. for owner/trainer Derek Ryan in 2015 before being purchased by Will Farish and David Mackie. Trained by Chad Brown in the latter half of her 3-year-old season and throughout her 4-year-old campaign, Irish Jasper was a Spa allowance winner in 2016 before landing that year's GII TCA S. at Keeneland en route to an apperance in the GI Breeders' Cup Filly & Mare Sprint. Watasha (Into Mischief) cost owner Peter Brant $450,000 at KEESEP last fall. The half-sister to SW Our Caravan (Daaher) is out of an unraced daughter of GI Acorn S./Mother Goose S./Test S. winner Jersey Girl (Belong to Me), the dam of GISW sire Jersey Town (Speightstown). TJCIS PPs