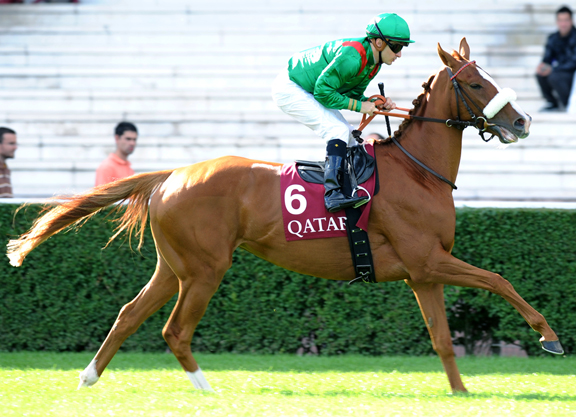 Half-Million Dollar Son of Champion Hillaby Debuts…
4th-GP, $47K, Msw, 3yo, 7 1/2fT, post time: 1:49 p.m. ET
Stonestreet Stable & Harrell Ventures' DUTCH TEDDY (Medaglia d'Oro) is the second foal out of Hillaby (Distorted Humor), a two-time winner from four stars for Eugene Melnyk before selling to Stonestreet for $500K as part of the owner's dispersal at the 2014 Fasig-Tipton Horses of Racing Age Sale. The daughter of Melnyk's Canadian Horse of the Year/Ch. 3yo Filly/Ch. Grass Mare Sealy Hill (Point Given) added a pair of victories in the Stonestreet colors, securing a Sovereign Award with a tally in the 2014 GII Bessarabian S. Dutch Teddy is bred on the exact same cross as MGISWs Elate and New Money Honey as well as current Hong Kong standout and MG1SW Golden Sixty (Aus). TJCIS PPs

Well-Pedigreed Firster Can Make a 'Splash'…
7th-GP, $47K, Msw, 3yo/up, 6f, post time: 3:27 p.m. ET
SPLASHTOWN (Speightstown) is likely worth a great deal more than the $300,000 agent Frankie Brothers paid for the colt on behalf of Starlight Racing at the 2019 Fasig-Tipton October Yearling Sale. The bay colt's year-older half-sister was still about five months away from having her first career start at that point, but it's been nothing but blue skies since for 'TDN Rising Star' Gamine (Into Mischief), the reigning champion female sprinter who made last weekend's Derby City Distaff S. the fourth Grade I success of her career. Stonestreet has since bought back into Splashtown, who will have to work out a trip from the widest gate in a field of 11. He enters off a bullet five-furlong move at Palm Beach Downs in 1:01 1/5 May 1. TJCIS PPs