Saratoga Fall Sale Offers a Bit of Everything 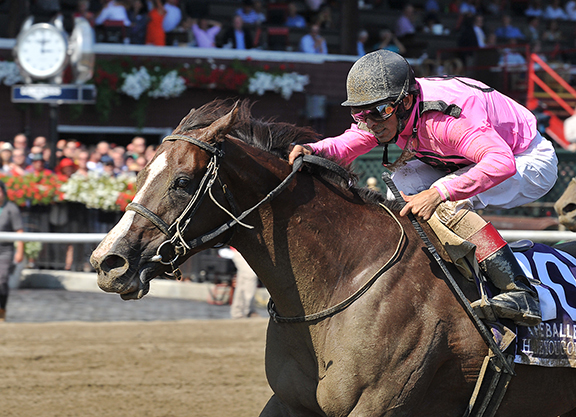 A total of 271 horses of all ages have been catalogued for Tuesday’s Fasig-Tipton Saratoga Fall Sale beginning at 10 a.m. ET at the Humphrey S. Finney Sales Pavilion in upstate New York.

Weanlings make up most of the remainder of the single-session event, and that section could get off to a quick start, as hip 80 features one of the more timely updates in the entire catalogue. From the second crop of MGSW & GISP War Dancer (War Front), the April-foaled bay is out of an unraced half-sister to former ‘Rising Star’ Funfair (More Than Ready), herself a stakes-winning half-sister to MGSW/G1SP Dynever (Dynaformer), whose son and two-time Fasig-Tipton graduate Four Wheel Drive (American Pharoah) won the Oct. 5 GIII Futurity S. to remain undefeated in his two lifetime starts. He is headed towards the GII Breeders’ Cup Juvenile Turf Sprint Nov. 1.

“This year’s catalogue is 20% larger, with increased numbers and quality among the weanling, broodmare, and racing or broodmare prospect offerings,” said Fasig-Tipton President Boyd Browning. “We have nearly 200 weanlings catalogued–the vast majority of which were foaled in New York–which should prove an attractive draw to prospective buyers both locally, and nationally.”

It has been another strong year for the New York-bred program at the racetrack, highlighted by the recent victory of Fasig-Tipton grad Tiz the Law (Constitution) in the GI Champagne S. at Belmont and additional graded winners Pat On the Back (Congrats), Gucci Factor (Gio Ponti) and Somelikeithotbrown (Big Brown).