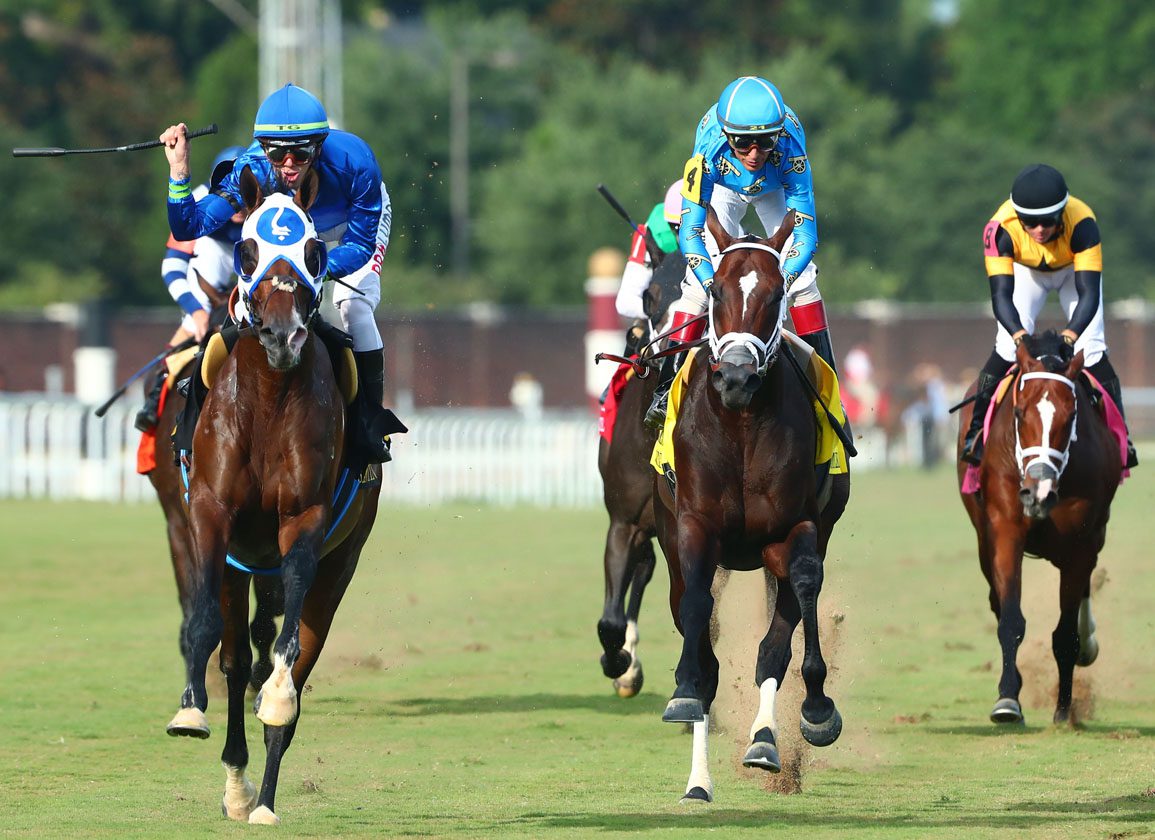 There was no Million Lane 5, no foreign contingent–Aidan O'Brien accounted for the only two overseas nominations–and only a fraction of the fans that would have passed through the turnstiles at the now-shuttered Arlington Park a handful of hours to the north.

That Saturday's GI Arlington Million took place at all is something of a 'miracle', as Churchill Downs had not hosted a race on the turf since early June. The GII Secretariat S. and GIII Pucker Up S. for 3-year-old males and females, respectively, were canceled so as not to subject the newly installed grass course to undue stress.

But offer a seven-figure purse and they will come–or eight of them will, at least–and Godolphin's Santin (Distorted Humor) proved to be the king of the hill for the second time in three months over the Matt Winn turf course, making use of his superior stamina to best California invader Smooth Like Strait (Midnight Lute) by a cozy 1 3/4 lengths. Sacred Life (Fr) (Siyouni {Fr}), the only starter in the race for four-time Million winner Chad Brown, outfinished the surprisingly favored Set Piece (GB) (Dansili {GB}) to finish a distant third.

Winner of the GI Old Forester Bourbon Turf Classic over Saturday's course and distance on the GI Kentucky Derby undercard May 7, Santin–the third pick at 2.45-1–hit the ground running and was intent on taking the race right to Smooth Like Strait, capable of going a good race over nine furlongs, but clearly better at the mile. The second favorite, Smooth Like Strait had things very much his own way as he lobbed the Million field along through fractions of :23.85 and :47.43, but the 5-year-old had to work much harder to retain the call in the next couple of furlongs and came under a heavy John Velazquez ride 2 1/2 furlongs from home. With Santin now breathing down his neck, Smooth Like Strait came out into about the four path off the home corner, desperately clinging to a tenuous lead. But Santin was always doing the better work, as he wrested command at the three-sixteenths pole and came away to score comfortably in the end.

“We were in a good spot and around the turn and [Smooth Like Strait] came out a little bit but I had a lot of horse beneath me,” said winning rider Tyler Gaffalione. “In the past we thought he may have underperformed in his races. We know how much talent he has and he showed that in the [Old Forester Bourbon] Turf Classic and here this afternoon in the Million. It's so special to win this race. Its history speaks for itself and I'm glad we are able to be a part of it.”

Santin was the impressive winner of a pair of late-season starts at Indiana Grand and Keeneland before running on stoutly to just miss at 15-1 in the GI Hollywood Derby at Del Mar Nov. 27. A running-on fourth in the GIII Fair Grounds S. on seasonal debut Feb. 19, the bay could not quite reel in 2021 Million hero Two Emmys (English Channel) in the GII Muniz Memorial S. Mar. 26, but added blinkers and made amends with a 7-1 upset in the Turf Classic. After having a plate repaired in the paddock prior to the GI Resorts World Casino Manhattan S. June 11, he retreated to finish sixth after chasing front-running winner Tribhuvan (Fr) (Toronado {Ire}) and was having his first start since.

Santin's dam was a dual graded winner and third in the GI Queen Elizabeth II Challenge Cup at three and runner-up in the GI Flower Bowl S. in 2016 for Kiaran McLaughlin before being covered by Distorted Humor–then a spry 24 years of age–in 2017. Santin is her first produce. Sentiero Italia is a half-sister to the likeable Saeed bin Suroor-conditioned Ashkal Way (Ire) (Ashkalani {Ire}), winner of the GI Citation H., the GII Kelso BC H. and GII Bernard Baruch H. and runner-up in the Fourstardave H.–then a Grade II–in 2006. Sentiero Italia is also represented by the 2-year-old colt Pacific Crest (War Front), a yearling Speightstown filly and a filly foal by Into Mischief.