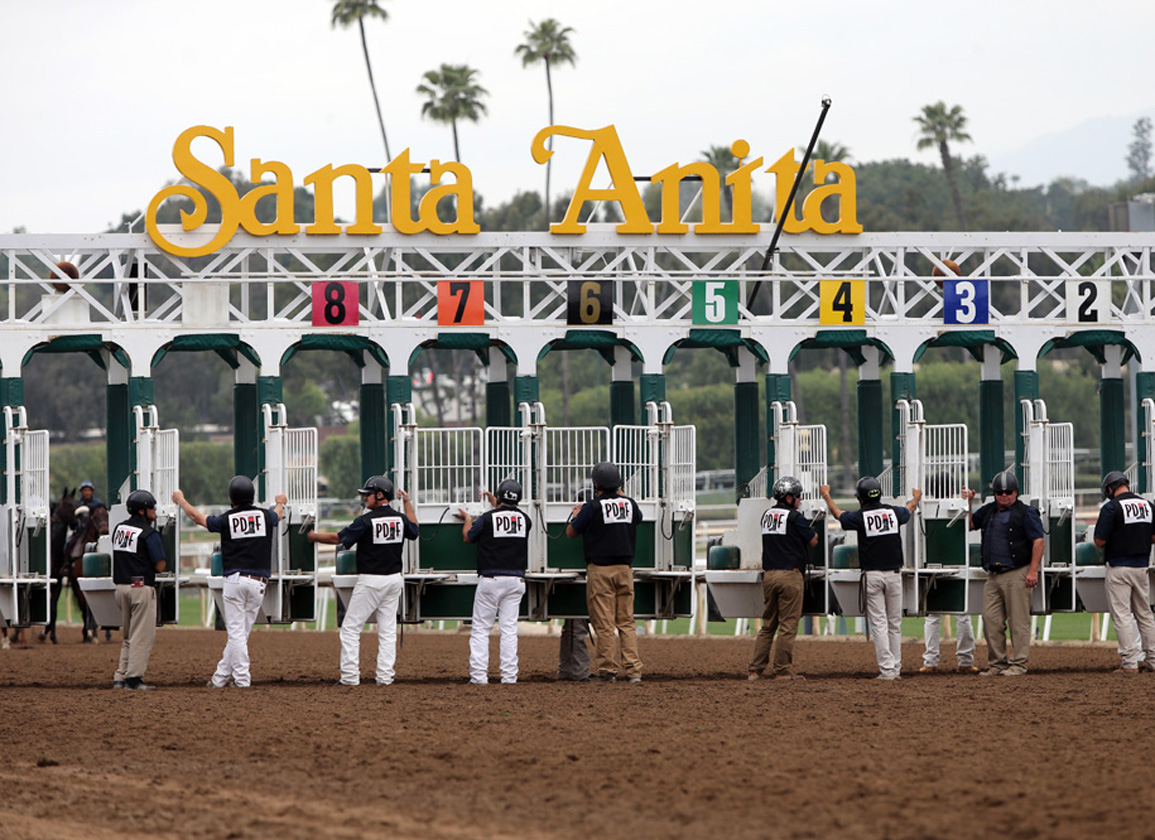 As springboard–or tripwire–before the ultimate Breeders' Cup showdown at Del Mar this November, Santa Anita's opening weekend sure ticks a lot of boxes.

“Really happy with the job my staff did putting all these races together,” said Santa Anita racing secretary, Chris Merz, on Thursday morning. “Stakes coordinator James Kasparoff did an outstanding job.”

In all, there are seven Breeders' Cup “Win and You're In” races. The three on Friday–the GI American Pharoah S., GII Chandelier S., and the Speakeasy S.–are geared around the sport's young blood. The Saturday and Sunday qualifiers–the GI Awesome Again S., the GI Rodeo Drive S., GII Santa Anita Sprint Championship S., and the GII Zenyatta S.–are for the adults in the room.

This is on top of a further seven stakes over the weekend, including the GII Eddie D S., the GII City of Hope Mile S., the GII John Henry S., and the GIII Chillingworth S.

“We've a gigantic weekend ahead of us,” Merz added. “The horsemen, the trainers did a great job supporting what we're offering in the book. The owners are excited. Hopefully, we're putting good cards together that the fans can enjoy and that leave the bettors scratching their heads.”

Entries over the first two days boast an average field size of roughly 8.3. The trick will be to keep the momentum going for the rest of Santa Anita's 16-day fall meet (and beyond), especially after a spring-meet that wore thin near the end, horse inventory wise.

After the GI Santa Anita Derby, for example, the track carded a rare two-day race week.

“We've still got a ways to go–I think our last step will be to get back to four-days a week,” said Merz. “This place has been through a lot over the last two-and-a-half years, with the animal crisis that we've had and obviously COVID.” The purses, however, have been increasing, he added. “We're getting back to full strength.”

The Santa Anita inventory is currently around 1650 to 1700 horses–roughly 100 horses higher than this period last year, Merz said.

The track's “Ship & Win” program–which started last December and provided a $3,000 bonus and a 35% increase in purse earnings for eligible shippers–has been instrumental in growing those numbers, said Merz.

According to Merz, Del Mar lured roughly 180 Ship & Win horses this summer. Of those, he said, roughly 140 have subsequently found home at Santa Anita.

Much fanfare has heralded the return after a more than two-year hiatus of the downhill turf course–an indicator of sorts of the track's (and the state's) increasing focus on the turf. During the most recent Santa Anita winter-spring meet, close to 50% of the races were on turf–10 years prior, the number of turf races at the track was nearer 30%.

“With turf options right now, they're very dependable for the trainers and the owners to get them some action and to run,” Merz explained.

Use of the downhill course has been suspended since the Peter Miller-trained Arms Runner (Overdriven) suffered a fatal breakdown crossing the dirt in the 2019 GIII San Simeon S.–an accident that coincided with a maelstrom of negative attention focused on the track.

The GII Eddie D S., on opening day, sets the ball rolling, with other downhill races the rest of the weekend including the Rodeo Drive S. and Unzip Me S. The course will also be used for a further two Cal-bred stakes on Oct. 16-17.

“And I'm actually writing our condition book now, so, we'll have a couple more at the end of our meet.” Merz added. “I'm just looking forward to seeing the downhill back–I think that's what everybody's excited for. It's been a long two years but everybody's ready to go.”

One of the aforementioned shippers is the Larry Rivelli-trained One Timer (Trappe Shot), who lines up a leading fancy in Friday's Speakeasy S. on the turf. “We're going into it perfect,” said Rivelli. “There's absolutely no excuse.”

One Timer has a perfect two-for-two record, breaking his maiden by more than 12 lengths at Arlington in June before following up in the Victoria S. at Woodbine a month later, winning by 3 3/4 lengths handily.

“We've always been high on him from day one when we started breezing him and working him,” said Rivelli of One Timer, a $21,000 purchase at last year's Fasig-Tipton Kentucky October Sale.

One Timer is yet to race on the turf, but the trainer has let the gelding stretch his legs on the surface at Arlington a couple times, under regular rider E.T. Baird. “His quote was, 'he's a lawnmower,'” said Rivelli, of Baird's aphoristic quip. “So, let's hope he likes the turf as much as the jock thinks he does.”

On his debut, One Timer reared in the gates, and was a tad slow away last time–a sticky little problem the team has since worked on.

“He should be good now, believe me,” said Rivelli. “We've spent a lot of time on that. We worked him from the gates the other day and it was just a mind-blowing work. Just unbelievable.”

If the stars align, One Timer will remain in California until Del Mar. “I'm pretty confident he's going to run good, and so, that would be the plan–keep him there and run at the Breeders' Cup.”

If so, it would constitute a fifth runner at the Breeders' Cup for the trainer.

“I've run four horses. Three ran fourth and one ran fifth,” said Rivelli. “We've danced a dance, we're just trying to break through. I would say this has been my best shot so far.”