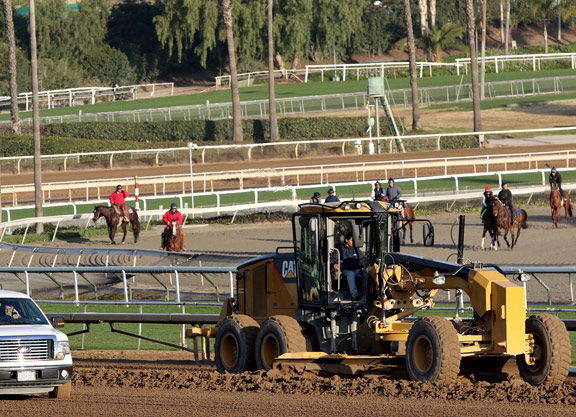 After more than a day-and-a-half of evaluations of the racetrack base and surface to determine a possible cause for the rise in fatalities this winter, Santa Anita has decided to keep the main track closed for training another morning, “in order to give us more time to thoroughly analyze soil data,” said Santa Anita director of publicity, Mike Willman. It will also give Mick Peterson, an expert in racetrack surfaces, time to conduct his own analysis of the track when he arrives Wedneday.

The track had been scheduled to re-open Wednesday morning, but trainer Eddie Truman, who sits on the California Thoroughbred Trainers board, said he believes they've made the right decision. “If it's an inconvenience, so what?” he said. “It's nice that they're on top of this. Let's get things right.”

The main track closed Monday morning at 9 a.m., after which, track superintendent Andy LaRocco and his crew began to “peel back” about five inches of the track's pad and cushion to examine the base, and to analyze the surface's soil consistency and moisture content.

Originally, the plan had been to close the main track completely Monday morning, but push back from some of the trainers saw the track opened until the 9 a.m. cut-off. Another horse was catastrophically injured during training hours Monday morning, meaning that 19 horses have been fatally injured since Dec. 26, six on the dirt during racing, five on the turf during racing and another eight during morning training. The overall total is higher than in comparable periods over the last three years.

The track at Santa Anita consists of three main layers–the hard base, the pad and the cushion.

“I'll be able to do an inspection of all layers of the track with a ground penetrating radar,” said Peterson.

The ground penetrating radar tests the consistency of the dirt surface, to ensure that it has not been compromised by the 11 1/2 inches of rain that have lashed the track this winter.

Why is this important? Racetrack consistency is described in this Grayson-Jockey Club Racing Surfaces White Paper as being integral to the “performance and orthopedic health of the horse.”

According to Peterson, the work superintendent Andy LaRocco and his crew conducted Monday and Tuesday falls into two main categories. The first will be to conduct a visual inspection of the surface and the base. The second, Peterson said, consists of mixing the surface to evenly distribute the finer particles of silt and clay, which could have washed to the inside of the track, with the larger, coarser particles of sand which he said he believes have remained nearer the outside of the track.

As part of a broader maintenance program at Santa Anita, the surface moisture content is routinely monitored, said Peterson, and samples of the track are taken monthly and sent for analysis at a laboratory in Kentucky. The samples are tested to determine the combination of sand, silt and clay in the track. As for how the samples are taken, there are two main protocols. Ordinarily, four samples are taken at the quarter poles. After periods of rain, a much broader set of samples are taken, to better understand the track consistency both near the rail and further out.

The first broader set of samples taken of the Santa Anita track since the rains are currently at the laboratory in Kentucky, where they're undergoing a particle size analysis, and a bulk density measurement, “to make sure [the cushion will] set up on the pad correctly,” said Peterson. The results are expected back Thursday.

“What's funny is the differences between the different tracks,” said Peterson. “But what isn't different between them is that the safe tracks always seem to be the ones that are consistent.”

Nevertheless, it would be wrong to focus attention on the track entirely, for experts describe the variables that weight into any one catastrophic injury as being multi-factorial.

Evidence has shown that 85% to 90% of all musculoskeletal-related fatalities have pre-existing pathology at the site of the injury, while certain other risk-factors, like the age of the horse, whether it raced at two, and the distance of the race, can all have a bearing on race-day fatalities. What's more, racetrack fatalities also include sudden cardiac death, the cause of one training fatality at Santa Anita this winter.

All the horses fatally injured at Santa Anita this winter underwent, or will undergo, a standard necropsy. CHRB equine medical director told the TDN Monday that about one-third of the necropsies have been completed, and that the necropsy process can take up to 12 weeks to complete, “depending on the circumstances.”

Arthur further explained that “a few” of the catastrophic injuries were “surprising,” in that the fractures were “atypical.” Though Arthur was unwilling to add any further information on those horses with “surprising” fractures, including specific numbers of horses, he said that “in instances of unusual fracture configurations,” he can request “special necropsy examinations” on a case by case basis.

Arthur also added that additional “data” could be collected as part of the CHRB's fatality review program, but that the data would be primarily informational and educational “rather than investigative.” Arthur didn't say what that data would consist of, but stressed that the fatality review process had started only a year ago, and that they were still working out specifics. He also said that “if we saw something we thought warranted an investigation in the law enforcement sense, we would do so.”

“We are still working through the protocols and trying different protocols to get the type of information we need,” Arthur said. “When you talk to trainers about fatalities, there's a natural defensiveness. There's an emotional aspect that we want to try to get around, so we're trying to make it collegial and educational and informative. We're not trying to accuse anybody of anything.”

An ad hoc committee is in the process of being put together, comprising Peterson, Hall of Fame retired jockey Alex Solis, now a CHRB commissioner, P.J. Campo, executive vice president, Racing Division, for The Stronach Group, a Southern California trainer, an active jockey, and an exercise rider.

Solis said that he met this morning with Campo to discuss who will fill the remaining slots. But he hopes that the first committee meeting will be held this Thursday, once Peterson has arrived and the other members chosen. Solis said that the specifics are a little hazy at the moment, but he believes that the committee will meet every Thursday, and could continue until the end of the meet. “We're all just here to help figure out a solution to all of this,” Solis said.

People for the Ethical Treatment of Animals issued a statement saying that they had canceled a planned protest at Santa Anita, “following a meeting with track representatives who pledged to take definitive steps, including extending the review of medication records to horses who are in training—and not just before races.” The statement, from PETA President Ingrid Newkirk continued, “Horses who require medication should not be anywhere near a track. PETA believes that there are innumerable problems with horse racing, but, as a bare minimum, all medications should be banned for at least a week before a horse races or trains, which would effectively stop lame horses from being able to run. PETA will continue to meet with Santa Anita officials in the coming days.”