Santa Anita to Honor Chillingworth With Stake During Autumn Meet 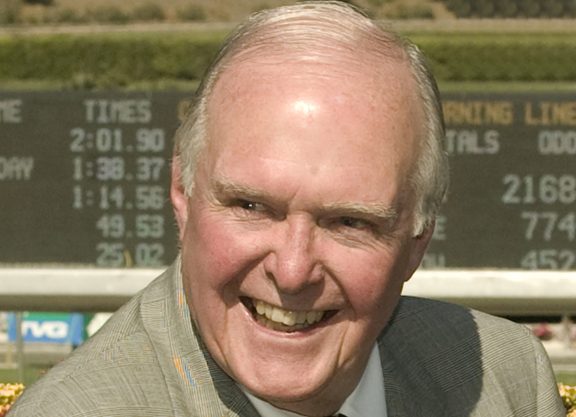 Sherwood Chillingworth, the longtime director and executive vice president of the Oak Tree Racing Association who passed away last October at 93, will be honored with The Chillingworth S.-formerly the LA Woman S.–to be contested during Santa Anita’s Autumn season. Prior to 2009, the Grade III contest for fillies and mares 3-years-old and up was run during the Oak Tree meet at Santa Anita as the Louis R. Rowan S., named after one of the founders of the Oak Tree Racing Association.

“Chilly was one of the sport’s true gentlemen,” said Aidan Butler, Executive Director of California Racing Operations for The Stronach Group. “He was full of life and loved racing. He actually lived here at Santa Anita and was such a part of this place, that it is only appropriate for us to honor him with The Chillingworth S.”

Chillingworth first served as an Oak Tree director in 1989 and was named executive vice president in 1993, just prior to the first of four Breeders’ Cups that he oversaw at Santa Anita. He also raced a number of Thoroughbreds in the name of his Paniolo Ranch or in partnerships, including Grade I winners Swing Till Dawn, Yashgan, Forzando and Valley Victory.