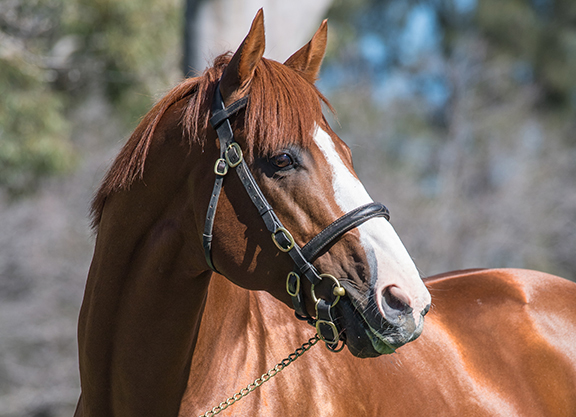 The latest development in a long, tumultuous and litigious journey saw the California Board of Stewards dismissing complaints filed by the current California Horse Racing Board (CHRB) regarding the scopolamine positives incurred by Justify (Scat Daddy) and Hoppertunity (Any Given Saturday) following their runs in the 2018 GI Santa Anita Derby and the GIII Tokyo City Cup S. respectively.

According to attorney Darrell Vienna, who represents Ruis, he filed a claim Thursday evening with the CHRB requesting that the board overturn the steward's decision. The claim, he said, concerns a statute in the state's Business and Professions Code.

The decision was issued Thursday evening following an Oct. 29 hearing on the matter. A TDN report on the hearing can be read here.

“I'm happy with the decision—mostly importantly for Justify. He is a great horse and deserves his undefeated record,” said Bob Baffert, trainer of both horses, in response to the decision.

In a 10-page ruling, the stewards framed the decision as one that came down to the following: “Whether, at the times of the races, Scopolamine was a class 3 or a class 4 prohibited substance as classified by the CHRB.”

Boiled down to its component parts, the decision circled two main CHRB rules: rule 1843.2, regarding drug classifications; and rule 1859.5, regarding disqualifications following a positive test.

The evidence as to what class of substance Scopolamine was listed in April, 2018, when the two horses competed, was “conflicted,” the stewards admitted.

“At the time of the races in April of 2018 the CHRB rules considered Scopolamine a class 3 prohibited substance,” the decision states. In California, class 3 drug positives trigger automatic disqualification of horses, regardless of trainer intent or culpability.

The CHRB, however, based its rules on the Association of Racing Commissioners International (ARCI) guidelines. The ARCI Uniform Guidelines for Foreign Substances was changed in December of 2016 to list Scopolamine as a class 4 substance.

“If this change in the ARCI Guidelines were to prevail in the interpretation of the 2018 version of rule 1843.2, then the disqualification of the two horses would not be necessary as the prohibited substance would not fall into a class 1-3 category,” the stewards' decision states.

The slow-moving wheels of California administrative law, however, meant that the CHRB hadn't formally adopted ARCI's guidelines at the time of the two races.

At a CHRB board meeting on Aug. 23, 2018, the CHRB finally voted to adopt a rule amendment which formally changed Scopolamine from a class 3 to a class 4 prohibited drug, which wouldn't require disqualification.

The CHRB, however, must formally adopt a rule change to 1843.2 before any changes in drug substances become effective, the stewards' decision states. As such, “It is the Stewards' opinion that had this Board of Stewards heard the Justify and Hoppertunity complaints prior to Aug. 23, 2018, both horses would have been disqualified,” the decision states.

Crucially at that same meeting on Aug. 23, however, the attending commissioners voted in executive session not to move forward with charges in the Justify matter, heeding the advice of former CHRB executive director Rick Baedeker and Rick Arthur, CHRB equine medical director.

For one, the CHRB knew at that time that the ARCI had changed its classification guidelines to reflect that Scopolamine was now a class 4 prohibited substance, the stewards' decision states.

Secondly, “Dr. Rick Arthur was of the opinion that the Scopolamine found in Justify and Hoppertunity, as well as five other horses tested in April and May 2018, was the result of environmental contamination and that the matters should be dismissed. He believed it was the right thing to do,” the decision states.

Furthermore, “Testimony by Dr. Arthur indicated that he felt the change in the ARCI Guideline Classifications for Scopolamine from a class 3 to a class 4 in December of 2016 was sufficient enough for him to consider the rule amended because the rule changing process in California is cumbersome and inefficient,” the stewards' decision adds.

“Even if this panel were to disagree with the CHRB's decision to dismiss these matters or the way the CHRB handled the situation, it cannot be argued that the CHRB lacked the authority to do so,” the decision states. “The law specifically allows such actions to take place and the CHRB followed the law.”

Following the law the CHRB may have, but the lack of transparency with which the whole matter was handled has eroded public trust in the board, as Arthur feared at the now infamous executive session in August of 2018.

That day, Arthur warned of a perceived lack of transparency should the CHRB fail to go public with the decision, the stewards write. A little more than a year later, the New York Times published its explosive story which confirmed Arthur's fears as it pulled back the curtains on the board's inner workings.