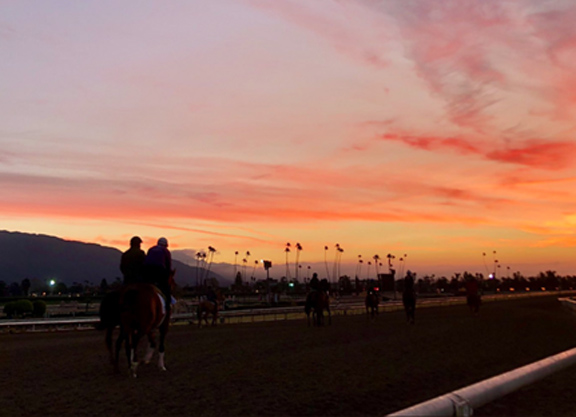 Santa Anita took two steps Monday morning towards the resumption of business as usual, with the main track opening up for joggers and gallopers only, while workers were allowed on the training track for the first time since it re-opened last Friday.

According to Santa Anita's vice president of racing and racing secretary Steve Lym, trainers had handed in between 140-150 work slips for the training track into the racing office by midday Sunday. This is part of a new safety protocol at Santa Anita, under which trainers must provide 24-hour advance notice to track officials if they intend to work a horse, in order to give track veterinarians–via past performances, workout data and through physical inspections–time to identify possible “at-risk” horses.

Lym said that “a few” horses were flagged during the evaluation process Sunday afternoon, and that all relevant trainers were contacted and subsequently agreed not to work their horses Monday morning.

According to Lym, the main track could re-open to workers by the end of the week.

“Right now, the track is in really good shape,” said Lym. “Our track guys are happy with the it. Trainers of the horses that went on it this morning are good with it. Unless something changes between now and Thursday and Friday, we're going to start working on it one of those days.”

As for the new 24-hour advance notice for works program, the horsemen have so far “bought into it,” said Lym. “They're doing their due diligence. They're handing in what they need to hand in. It's just extra work for us, which is okay for now, because we're not doing any entries.”

In regards the main track, trainer Dan Blacker galloped 10 horses on the surface Monday morning, and confirmed that, “all my riders said it felt great. All the horses galloped really nicely on it.”

Richard Mandella was at Los Alamitos Monday morning supervising workers, but he said that, “all my riders said it felt great. We just galloped. That's all they're allowing at the moment, and that's fine. We're good for a few days.”

The Stronach Group's COO Tim Ritvo told the TDN Saturday that racing will resume at the facility Mar. 22.

Early Monday morning, the Phil D'Amato-trained Access Granted suffered an injury on the training track during exercise, and was taken back to the barn, said attending veterinarian Vince Baker. He added the horse was comfortable. D'Amato, who's currently in Florida, further confirmed, via text, that his horse will be okay, and that the injury isn't life-threatening.